2021 already has brought us tornadoes, floods, fires and more. Now the annual Atlantic/Gulf of Mexico hurricane season has arrived early, again, meaning it's time to get ready for that and whatever disaster is common where you live. 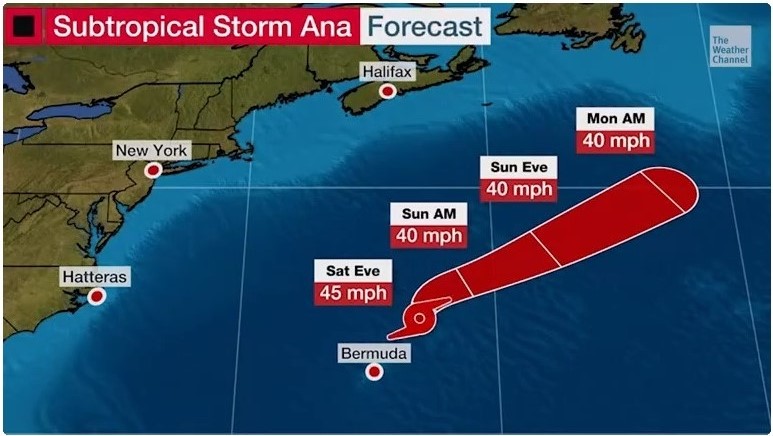 The Atlantic hurricane season doesn't start until June 1, but we already (again!) have an early forming storm. Subtropical Storm Ana developed today, May 22, near Bermuda. (Screen shot of The Weather Channel video.)

So far, that prediction looks spot on.

The Atlantic hurricane season doesn't officially start for another week and a half. But for the seventh year in a row, a storm has been named ahead of the season's annual June 1 beginning.

Hello to Subtropical Storm Ana. She formed this morning, Saturday, May 22, near Bermuda.

The good news is that she looks to be a fish, the weather world's term for a storm that stays in open water and doesn't threaten land. The Weather Channel says as Ana moves erratically westward, she's expected to show little change in strength, with gradual weakening expected soon.

Early official start on the way? The continuing trend of an early Atlantic hurricane season could mean that by this time next year, the official start of the tropical season is bumped up by two weeks to mid-May.

But that's a year away. Now we're bracing, and preparing, for the 2021 Atlantic hurricane season. Here are the names of the storms, including the already taken Ana, with which we might have to cope:

Atlantic season is main U.S. focus: Having lived for decades on the East Coast, including in Florida when that state was the target in 2004 of four hurricanes (two within three weeks at our house in Palm Beach County!), I focus on the Atlantic hurricane season.

That fixation followed when we moved back to Texas, since the Atlantic tropical storm season includes the Gulf of Mexico, a large swath of which is along the Texas coast.

In fact, as Ana was developing, a low-pressure system was trying to coalesce in the Gulf of Mexico. It didn't, but it was an early near-miss.

The fragmented low came ashore on the Texas coast early this (Saturday, May 22) morning before becoming an official 2021 storm statistic. It is, however, still dropping rain as far inland as here in the Austin area.

I am not alone in watching the storms that start in Saharan Africa and make it all the way across the Atlantic. There's a lot of U.S. coastline and inland that's affected every year by these storms.

But we don't have the monopoly on tropical systems.

Storms, westward ho! On the other side of the country, there's the expansive and beautiful Pacific Ocean. It's calm name notwithstanding, there's a hurricane season there, too.

Good news for those in potential paths, including residents of our Island Paradise 51st state and three U.S. territories. The NOAA predicts a near- or below-normal 2021 hurricane season predicted for the Central Pacific. 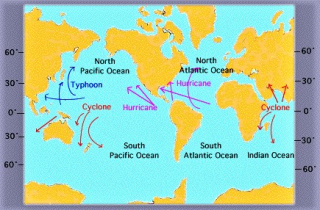 For the 2021 season as a whole, that's two to five tropical cyclones for the region. This number includes tropical depressions, named storms, and hurricanes.

And yes, once systems move away from the United States, they are designated differently. The oceanic systems typically are known as typhoons or cyclones.

It only takes one: Regardless of where they originate or what they are called, Chris Brenchley, director of NOAA’s Central Pacific Hurricane Center, points out one inescapable hurricane/cyclone/typhoon fact:

"As we have experienced in previous hurricane seasons, it only takes one direct hit, or even a close call, to have a major impact on daily life here in the Hawaiian Islands."

That's true, too, for all of us in Atlantic Ocean/Gulf of Mexico, especially since the predictive cones of uncertainty are, well, so uncertain.

So, per Brenchley's advice, "Take time to prepare now. Make a preparedness plan so that you and your family stay healthy and safe."

Storm story shout outs: I offered some disaster prep advice back in late March in Disaster season 2021 is here. Get ready! Yes, I'm shamelessly plugging that post in today's Saturday Shout Out, along with The Weather Channel, NWC and NOAA links already featured in this post, as well as the following items: 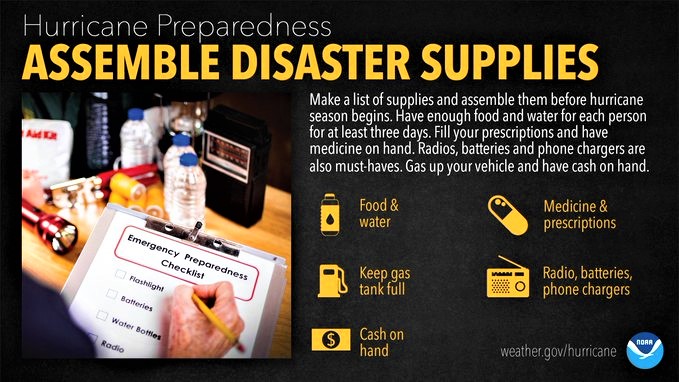 I'm also adding some other shameless plugs for Don't Mess With Taxes storm posts, since they contain financial and tax tips in addition to physical safety suggestions. And because it is my blog!

As that last shout out notes, you might be able to get some tax and government help if you do sustain major storm damages.

I hope you don't have to go that route. And even if does happen, it's always better to be prepared so that you can recover more quickly.

And, most importantly, be prepared so that you and your family stay safe when any type of disaster threatens.