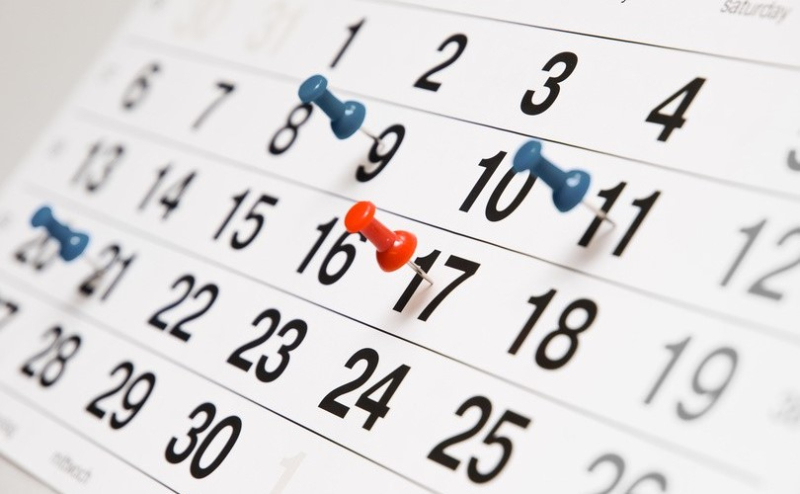 Among the many numbers critical to tax filing is the deadline returns are due. That's not always the same for all taxpayers. This year we have three due dates for filers in five states.

I love tax visuals. There are tons of fun tax graphics (yes, I used "fun" and "tax" in the same sentence) out there, many from the Internal Revenue Service.

I just ran across another one, an infographic from WalletHub. A very long infographic that, since I'm awarding it this weekend's Saturday Shout Out, you'll find at the end of this comparatively brief post.

But before you start scrolling, I want to point out one quick update to the image, since it was published in late March.

More than one Tax Day 2021: The infographic notes that some taxpayers in three states — Louisiana, Oklahoma and Texas — don't have to get their 1040 forms to the Internal Revenue Service by May 17.

We have until June 15 to file our tax returns and pay any amounts due. The reason? Mid-February's severe winter storm wreaked havoc in parts of the Pelican, Sooner and Lone Star States.

And yes, I switched to "we" because me and my neighbors here in Central Texas are in the Federal Emergency Management Agency disaster declaration for Tejas. In fact, it covers all of the state's 254 counties.

Since that storm, Mother Nature continued to act out as a Momster. That meant that in late April, the IRS added two more states to the disaster declaration delayed filing club.

Now some Kentucky taxpayers who in late February endured flooding (and more) now have until June 30 to file. Some Alabama filers who were in tornado (and more) stricken areas back in March have until Aug. 2 to file.

UPDATE, May 15, 2021: Make that six. The IRS on May 14 announced that Tennessee taxpayers in 23 counties have until Aug. 2 to file due to a major disaster declaration for late March/early April tornadoes and other storms in those areas.

My posts on these extended filing deadlines (linked to via the state names above), have more on just which counties are covered. But be sure to check the FEMA declarations pages just in case your area has been added since the original declaration.

Note, too, you'll see some areas that FEMA has deemed disasters, but for which the IRS has not made a determination about corresponding tax relief. Until that's done, there are no special tax rules for folks in these locations.

Not disastrous, just distant: Also, as I wrote in my 7 tax moves to make in May, June 15 is the normal Tax Day each year for U.S. citizens and resident aliens who live outside the country and Puerto Rico.

This mid-June deadline also applies to members of the military posted outside the United States.

Plus, the filing deadline could be even later for military service men and women and eligible support personnel who serve in a combat zone.

One more number: OK, with that filing deadline elaboration noted, it's almost time for the WalletHub infographic. I say almost because, thanks to all the tax numbers it contains, the image also earns this weekend's By the Numbers honor.

Which number, specifically? One that isn't spelled out, but which caught my eye. It's six for the half-dozen individuals noted in the infographic's last segment.

They all ended up in far-reaching tax trouble, underscoring the fact that all of us, from regular Jack and Jill Taxpayers to famous or infamous folks, must answer to the taxman.

Now start scrolling and enjoy the many, many, many tax tidbits.

Follow-up filing tips: If you've made it this far, good for you and thanks!

And if all the infographic's tax numbers have inspired you to file your taxes (or terrified you about the prospect of not doing so), the ol' blogs 2021 Tax Tips could be of assistance.

They offer helpful hints on how to fill out and file your annual return, along with some post-filing advice, the latest tax news, and, if you've already sent the IRS your paperwork (and payment), ways to reduce this year's already accruing tax bill that you'll deal with next filing season.

You'll find the monthly tip collections on their own respective pages: January, February, March, April, and May.