The tax compliance burden has eased, but law changes could bump it back up 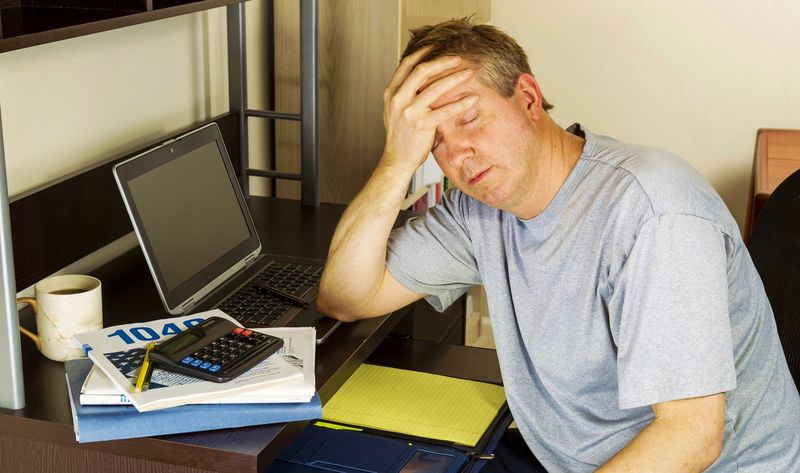 We made it through April 15, 2021. The problem, though, is that for most individual taxpayers and the tax pros who handle their filings, yesterday wasn't really Tax Day.

That's still more than a month away. Or, to be precise per [shameless plug] the clicking away countdown clock in the ol' blog's right column, 31 days and some odd hours away.

Those extra days and hours until the new 2021 Tax Day on May 17, regardless of how well-intentioned (but incomplete), also should be added to the overall compliance burden taxpayers face every tax season.

But the extra time this filing season means there likely will be some add-on to the time spent gathering necessary filing data, filling in 1040s or talking with tax preparers about them, and then sending last year's returns to the IRS.

Another month to do that also adds to angst that gets ramped up when the process is dragged out, like this (and last) year. Thanks, COVID-19.

And don't get me started on the new laws created, again many of them prompted by the persistent pandemic. Thanks, again, coronavirus.

Less time dealing with taxes: But still, things seem to be getting a bit less burdensome for taxpayers, according to one recent filing burden analysis.

The National Taxpayers Union Foundation's (NTUF) annual review of the complexity and cost of the federal tax code comes up with an estimated total cost, in terms of both time and dollars, of complying with the U.S. tax code.

The good news from the NTUF assessment is that for the third consecutive year since the passage of the Tax Cuts and Jobs Act (TCJA) of 2017, Americans have spent less time complying with tax laws.

In a good way. Not by cheating!

However, says the NTUF, the bad news is that the saving of tax compliance time this year is due mainly to technical changes made by the IRS in its calculation of time burdens and expenses, not actually less complicated tax laws.

TCJA standard deduction change: The total number of hours spent complying with the code has now fallen in each year since 2017, when it reached its high of nearly 8.1 billion hours, according to the NTUF calculations.

This largely was due to the increase in the number of taxpayers who opted to use the standard tax deduction instead of itemizing their expenses.

The IRS previously estimated that 26 million fewer filers would use Schedule A because of the essentially doubled standard deduction amounts under the Republican tax reform law. That meant, naturally, much less time lost to paperwork on itemized deductions.

The TCJA also eliminated the Affordable Care Act's individual mandate effective in 2019. The IRS estimated that this reduced the compliance burden by 10 million hours.

For 2020, NTUF found a dramatic drop in taxpayers' compliance burden, freeing up 1.8 billion hours and $63 billion in costs compared to the prior year.

Still, billions of hours lost to taxes: But even with the IRS' technical adjustments that significantly reduced its overall 2020 compliance burden estimate, those 6.081 billion hours are a massive time sink that may be difficult to comprehend.

"It is difficult to fathom just how much time is consumed by the paperwork burden of federal taxes. 6.081 billion hours is equal to almost 694,000 years. In that time, the top ten longest-running scripted U.S. television shows (from The Simpsons to CSI: Crime Scene Investigation) plus every Meet the Press and every Sesame Street, could be binge-watched more than 525,000 times."

Going forward, I'll be thinking of my Netflix, Disney+ and Amazon Prime subscriptions, as well as plain old broadcast TV, differently from now on!

Dollars lost to tax considerations: Then there's the dollar cost of those hours spent on taxes instead of some other endeavor, either work or leisure related. NTUF says it is equivalent to $220 billion in labor.

Add to that the almost $84 billion in estimated out-of-pocket costs taxpayers spent on software, professional preparation services, or other filing expenses, and the total economic value of the compliance burden imposed by the tax code for 2020 can be calculated at around $304 billion.

Those billions, according to the NTUF —

Private sector comparisons show, says NTUF, that of the largest companies in the world by revenue that make Fortune magazines' annual list of the Global 500, only three businesses are worth more than the value of the compliance burden of the U.S. tax code. They are Walmart, with revenues of $524 billion; Royal Dutch Shell at $352 billion; and the Saudi Arabian government owned Aramco at $330 billion.

"Greater accountability and transparency are needed so that lawmakers have better information about how taxpayers interact with the tax system and can identify trends in problem areas that need to be addressed," says NTUF in its latest analysis.

Then there's the involvement of the House and Senate. And oh boy, those Representatives and Senators do love to put their fingers into the tax pie. From 2000 through 2020, Congress enacted, on average, 420 changes to the tax code each year, as shown in the NTUF graph below. 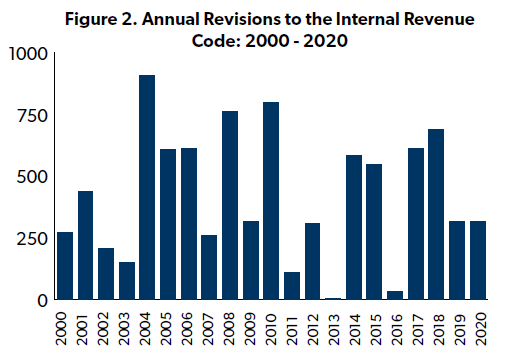 In two decades of changing the tax code, the revisions ranged from a low of three in 2013 up to 797 in 2010. After two successive years that saw changes enacted higher than the annual average, 2020 included 314 tax changes.

And the American Recovery Plan Act (ARPA) enacted in March to provide, among other things, another round of COVID-19 relief payments, made 96 changes to tax law.

The NTUF, which is a nonpartisan but conservative-leaning Washington, D.C.-based tax policy think tank, also is concerned that any tax simplicity achieved in the 2017 reform act could be headed for reversal as the now Democratically-led Congress and White House look to roll back parts of the TCJA.

Better tax-writing process would help: I totally get what the group is saying here. I worked on Capitol Hill for a Ways and Means member and the committee itself.

Seeing how the process works (or doesn't) taught me that lawmakers need to test out any changes they propose personally, not just by handing off things to tax professionals.

If they actually realized the effects of their meddling, even the well-intentioned tax law changes, they'd take more time and get more input from the taxpaying public and especially the tax pros who are facing the increasing challenges of ever-changing tax law.

I know, like that's going to ever happen. But a tax geek can hope.

Until then, my best advice is to start your tax planning and preparation early. That goes double when you hire a tax preparer, since those folks have many, many more clients than just you.

And that means if you haven't begun work on your 2020 taxes, due in just about month, or touched base with your tax preparer, do that soon. Like now!

You don't want your own inaction to add to your tax compliance burden.