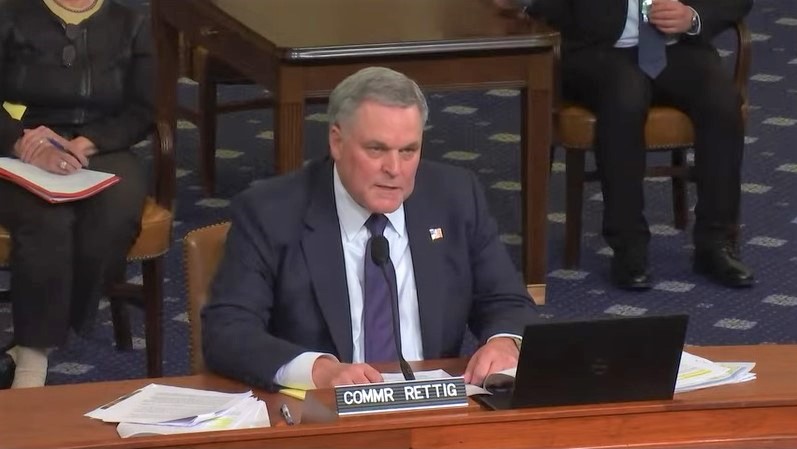 It's likely to be déjà vu all over again for IRS Commissioner Charles Rettig, testifying here in March before a House tax panel, when he goes before the Senate Finance Committee on Tuesday, April 13.

Not to get your tax deadline hopes up too much, but Internal Revenue Service Commissioner Chuck Rettig is testifying tomorrow, April 13, before the Senate Finance Committee (SFC).

The The last time he talked to lawmakers, it was in March to Representatives on the Ways and Means (W&M) Oversight Subcommittee. It was then that Rettig put the kibosh on the possibility that the IRS would extend the impending April 15 estimated tax deadline until May 17, aligning it with this year's postponed main Tax Day.

Maybe, just maybe, Rettig will make a more welcome surprise announcement tomorrow. He could say, just two days away from the April 15 due date for the first estimated tax payment for 2021, that the IRS has decided to give 1040-ES filers another month, too.

Not giving in: Even though the IRS has been getting pressure for week from taxpayers, tax preparers, tax professionals' organizations and lawmakers, the agency has been holding firm to the estimated tax system's regular due dates.

In fact, just last week (on April 8), the agency issued a statement reminding everyone of that the estimated tax first quarter deadline is still April 15.

Still, we are talking taxes and sudden changes are not unheard of here. So it's not surprising that more than a few tax folks are, with apologies to Dusty Springfield, wishin' and hopin' and thinkin' and prayin' for a 1040-ES delay.

But again, I personally am not getting my hopes up for a delay here.

UPDATE, April 13, 2021: The SFC leaders' written statements and Rettig's testimony are available for download PDFs. Click the names to do that: Wyden, Crapo and Rettig. Watch the tape of the hearing here. Note that it starts a little after the 20-minute mark. The question and answer segment begins at the 40-minute mark.

I suspect, however, the hearing, which is officially titled "The 2021 Filing Season and 21st Century IRS," largely will be a replay of the House W&M subcommittee's inquiries last month.

At that March 18 session, Representatives questioned Rettig about such IRS issues at the agency's backlog of unprocessed tax returns received during the pandemic-impacted 2020 tax year to its juggling of regular tax tasks and issuance of multiple rounds or COVID-19 economic impact payments to its enforcement activities.

It also was then that Rettig raised almost every eyebrow in the tax community when he justified maintaining the April 15 estimated tax deadline because, in his words:

"There's a large contingent of wealthy individuals in this country who do not make their estimated payments and who essentially take the money they should be paying in quarterly estimated payments to the government and take the arbitrage, invest it, and we’re not going to give them a break of interest and penalties to do so."

I'm sure he'll be asked about that characterization.

Legislation lagging: Aside from some pointed questions, however, I don't expect much actual action regarding the looming estimated tax (and more) deadline.

A bill was introduced on April 8 in the House by Rep. Lloyd Smucker (R-Pennsylvania) to make 2021's first estimated tax deadline May 17.

However, that bill (H.R. 2437) has not moved an iota since its introduction. It's highly unlikely that the House and Senate could complete action on it in just two days.

The best hope (that word again) right now, per a conversation on #TaxTwitter, would be for the bill to pass after April 15 but be tweaked to make all 2020 tax return overpayments timely payments (retroactively) for the first estimate tax payment period.

Another suggestion is that the bill mandate that future April 15 Form 1040 filing deadline postponements also apply to all other tax filings due on that day.

I'll let you know what, if anything, the SFC members and Rettig have to say about the April 15/May 17 mismatched due dates in a future post.

I'm hoping (yet again) it will be good news. But the tax skeptic in me is not holding my breath.

Or maybe, just maybe, he will get up there and actually tell the truth and say that the IRS under it's current structure and resource level provided by Congress can no longer do the job it has been assigned nor can it continue to have more and more straws added to the camels back that has already been broken for years. Wouldn't that be refreshing!