$80 billion could help IRS increase audits of the wealthy, which have dropped in last decade

President Joe Biden's proposal to give the Internal Revenue Service an extra $80 billion over the next decade to go after tax cheats — which the ol' blog talked about earlier this month in this post — is getting a lot of attention in advance of his nationally televised speech night.

I suspect the current IRS hierarchy is pleased, despite the comments to The New York Times by a former commissioner that an extra $25 billion over a decade would be sufficient.

"I'm not sure you'd be able to efficiently use that much money. That's a lot of money," said John Koskinen, whose term as IRS Commissioner ended Nov. 12, 2017, of Biden's 10-year, $80 billion proposal.

The debate over the exact amount of money in fiscal year 2022 for the IRS and how it should be apportioned will continue, both in the media, among the tax community and, most importantly, on Capitol Hill.

There is, however, more consensus that the IRS needs to keep a closer eye on the wealthiest filers.

More tax attention to rich needed: Current IRS Commissioner Charles Rettig told a House Ways and Means subcommittee in March that one of the reasons the agency stuck with the April 15 estimated tax deadline was because:

"There's a large contingent of wealthy individuals in this country who do not make their estimated payments and who essentially take the money they should be paying in quarterly estimated payments to the government and take the arbitrage, invest it, and we're not going to give them a break of interest and penalties to do so."

At a follow-up hearing before the Senate Finance Committee in April, Rettig elaborated on the IRS' focus on rich taxpayers.

"Over the past two years, we have shifted significant examination resources and technology to increase our focus on high-income and high-wealth taxpayers," noted Rettig in his prepared testimony.

But that attention hasn't paid off, at least not yet.

Despite Rettig's touting of extra attention to the returns filed by the rich, he also acknowledged that IRS examinations, which is the official agency term for audits, of those returns have decreased. His testimony continued:

IRS audits of high-income taxpayers continue to decline, according to a recent report by the Transactional Records Access Clearinghouse (TRAC) at Syracuse University. Only 2 percent of millionaires were audited in 2020, 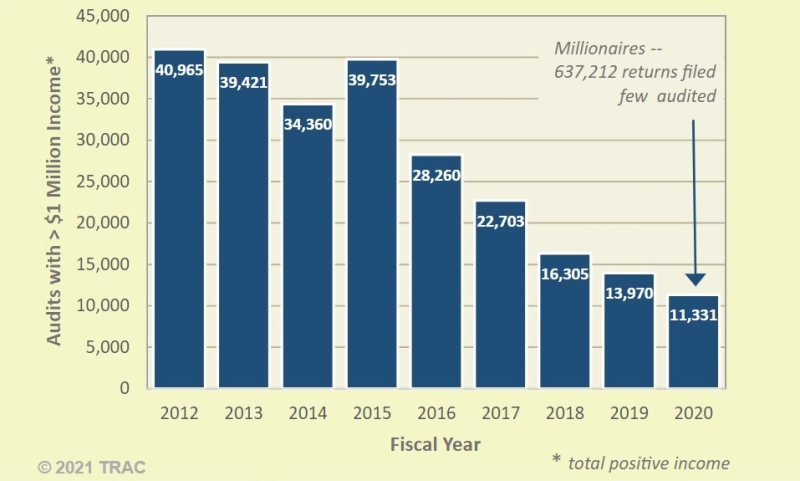 Now audits are dropping even though the number of millionaires in the United States has almost doubled less than a decade, says TRAC.

Rich have richer tax resources: Budget and staffing cuts get the primary blame for the reduced examination rates. 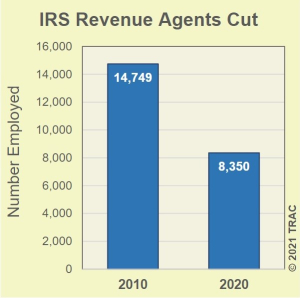 "Substantially all experienced examiners – those who are the most highly trained with substantial accounting skills – are almost entirely focused on tax returns that include complex issues, such as high-income taxpayers, pass-through entities, multi-national taxpayers involving international tax issues, large pension plans, private foundations and the most egregious situations," the commissioner told Senators.

The rich, they are different: That IRS specialized training and expertise is needed because, as F. Scott Fitzgerald famously said, "Let me tell you about the very rich. They are different from you and me. They can afford the best tax attorneys."

OK, the great American novelist didn't say that part about high-dollar tax advisors (or, as I glibly tweeted earlier, avoid audits), but he could have.

And that's why Biden is proposing such a big boost to the IRS budget in this area.

With all due respect to former commish Koskinen, without the funds to adequately train and utilize more examiners, the IRS likely will continue to, as TRAC argues, let billions of dollars in tax revenue due from the country's wealthiest taxpayers slip through its fingers.