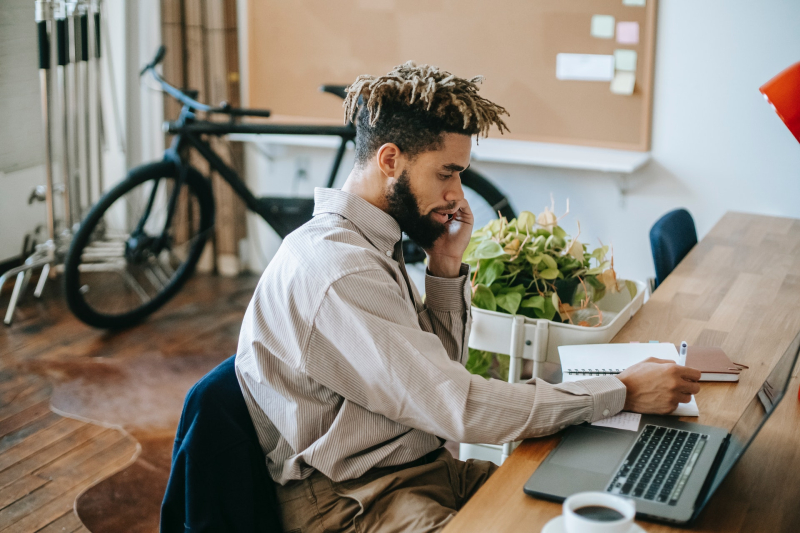 Being the boss can be fulfilling, exciting and, if profitable, mean more tax responsibilities, like paying self-employment taxes. (Photo by Zen Chung via Pexels.com)

There are a lot more self-employed taxpayers this filing season, thanks to (you guessed it) the COVID-19 pandemic.

People whose hours were reduced at their full-time jobs made up (or tried to) the lost income with side gigs. Others whose salaried positions were eliminated embraced their entrepreneurial spirit and became their own bosses.

Now they are filing their tax returns for the first time with self-employment income. That, of course, means encountering another form, Schedule SE.

Self-employed version of FICA: Schedule SE is the self-employment answer to the Federal Insurance Contributions Act (FICA) payroll taxes taken out of a worker's salary.

FICA tax amounts go toward the Social Security and Medicare programs, with workers and their bosses each paying an equal amount of tax that is calculated as a percentage of a worker's salary.

The total Social Security tax is 12.4 percent, split evenly between the two tax sources every pay period. The Medicare portion is 2.9 percent, again divided with boss and worker paying half each out of each paycheck.

The combined tax total of these two retirement-focused federal programs comes to 15.3 percent. Again, 7.65 percent comes from the worker's pay and 7.65 percent is matched by the employer.

Social Security limited, Medicare not: The major difference between the two payroll taxes is that there's a limit on the Social Security collections, but not on the taxes that go toward Medicare.

Each year when a worker's income hits the annual Social Security wage base limit — for 2020 that was $137,700; the annual inflation adjustment bumped it to $142,800 for 2021 — no more tax is collected for the government retirement benefit.

Sole proprietor Schedule SE: The simplest self-employment, referred to in Internal Revenue Service shorthand as SE, tax calculation is when you're a sole proprietor, either as your full-time job or through multiple gig jobs.

A quick note about multiple self-employment gigs. In these cases, you'll file a Schedule C for each job if it's materially different. This would be the case, for example, if you are a driver for a ride-hailing service most of the time, but also put your photography skills to financial use snapping keepsake images for paying customers.

Since these jobs involved different earnings efforts and expenses, you need to keep track of them separately. Not only does it show the IRS that you're taking the jobs seriously, but good record keeping will ensure that you don't miss out on any of the allowable associated expenses you can deduct for each enterprise.

However, when it comes to the SE tax on multiple sources, all the income is combined to determine if and how much you must pay.

If your self-employment earnings are reported as partnership or S corporation income, the SE calculation is more complicated. For this post's purpose, we're focusing on Schedule C income.

Yes, $400. That amount means that even if you didn't earn enough to actually require you file a tax return, you still could be responsible for making SE tax payments. Parents of teenagers who get summer jobs, take note!

And if you have multiple self-employment gigs, the tax is due on your total earnings from all your being-your-own-boss endeavors.

Take the two jobs used as an example in the previous section. Say you earned $8,000 from your driving job and $350 via your photography gig. The $350 doesn't escape self-employment tax because it's less than the $400 threshold. You owe self-employment tax on your total, combined $8,350.

That amount and the SE tax calculation is made on the aptly named Schedule SE, and which, via this post, is added to the Tax Forms Fiesta! page.

Below is a shot of Part 1, where you figure you self-employment tax amounts. 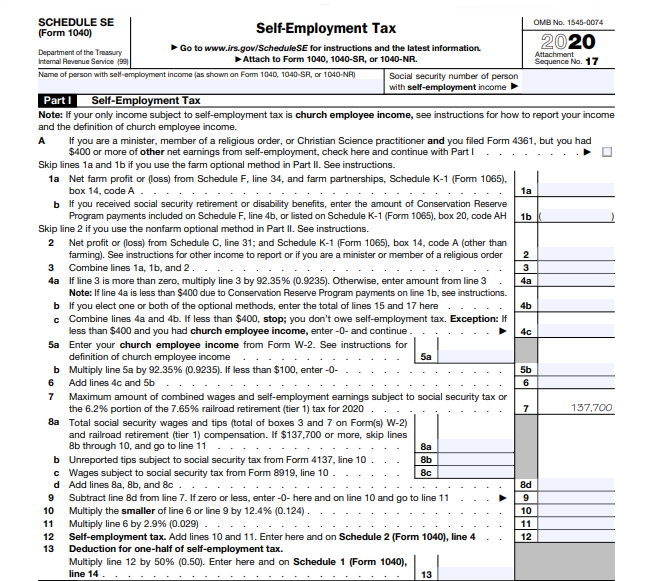 The notable lines are near the bottom of this section. Line 10 is where the 12.4 percent Social Security amount is calculated and entered. You enter the 2.9 percent Medicare tax amount on Line 11.

And this is where most first-time SE tax payers tend to freak out.

Self-employed pay both amounts: Remember earlier in this post where I discussed the FICA amounts? You might have noticed that I repeatedly made the point that the combined 15.3 percent Social Security and Medicare tax amount is split so that both workers and their bosses pay an equal amount.

That dividing by two of the employer and employee tax payments is the same even when you're self-employed. But since you're both the employee and employer, you must pay both portions of the Social Security 12.4 percent tax and the Medicare 2.9 percent tax.

Go ahead. Rant about this tax requirement for a minute or two. Even though you understand the reasoning, it still feels a bit unfair, especially when you're working so hard to make a go of it as a small business owner/operator.

Feel better letting off some tax steam? Good. Now here's something that's even more satisfying, emotionally and from an SE tax filing perspective.

You get to reclaim the employer portion of the SE tax as a deduction on your individual tax return.

It's a write-off is an above-the-line deduction (aka an income adjustment) on Form 1040's Schedule 1. As noted in the Schedule SE snippet shown above, this half amount goes on line 14 of Schedule 1.

Also, if both you and your spouse are entrepreneurs, then you each much file your own Schedule SE for each of your separate self-employment income amounts even though you jointly file one Form 1040. The total profits (or losses) from all your businesses will go on your one 1040.

And your combined SE tax from each schedule then is transferred to line 4 of Form 1040 Schedule 2.

This option, which in prior tax years was the first section of Schedule SE, was used by many self-employed taxpayers. The IRS even had a flow chart (shown in this earlier look at Schedule SE).

The short SE version is gone.

Instead, if you didn't have very much self-employment, you might be able to use Part II of the 2020 Schedule SE. This is an option if your SE profits were less than $6,107 and also less than 72.189 percent of your gross income.

Also, these amounts must be non-farm earnings.

Why the agricultural specificity? Because Part II of Schedule SE also has a calculation option for farm income.

I don't want to get too much into the tax weeds here. The bottom line is that if your self-employment didn't pay that much, but enough to trigger SE tax, this could be your area of Schedule SE. Your tax software or tax pro will help you out here.

Deferred SE tax: Finally, the 2020 Schedule SE has a new Part III where self-employed individuals figure the maximum amount of self-employment tax payments they may be defer. The amount then also is entered on Form 1040's Schedule 3.

This tax deferral option applies only to the Social Security tax. It was created in August 2020 via executive action by Donald Trump, which allowed employers to suspend from Sept. 1, 2020, through Dec. 31, 2020, the payment of the 6.2 percent employee portion of FICA.

Self-employed taxpayers were left out of that White House move, but the Coronavirus Aid, Relief and Economic Security (CARES) Act that became law on March 27, 2020, included a provision that lets self-employed taxpayers defer half of the Social Security portion of SE tax for earnings from the bill's enactment date through Dec. 31, 2020.

Note that this is only a delay in the payment of the tax. The deferred Social Security tax amount must be remitted to the U.S. Treasury in 2021 and 2022, in amounts split equally between the two years.

Paper = profit: Yes, it's a pain having to complete more forms and make more tax calculations.

But look on the bright side. It means your business (or businesses) were profitable! That's a price of doing business that most of us who are our own bosses are willing to pay.

Plus, sending Uncle Sam your proper amount of self-employment taxes contributes to those future Social Security and Medicare benefits you'll be able to collect when you're no long an employee or an employer.

Not sure if this went through earlier... sending again just in case it didn't... May 17th in eight minutes...

Hi Kay... my mom gets a monthly stipend of $235 from her old hospital employer as part of the union contract effected just before she retired. Her old tax accountant (thru last go-round) had previously entered it as self employment; i.e. independent contractor vs employee. (I am trying to do it this year, and it would have been easier for me had they not removed the short form.) A couple of questions... First, do I need to enter anything on lines 8a thru 8d, and then 9? If so, what? She has no W-2s, etc, and clearly, line 6 is the smaller amount. Second, does Part III only need to be entered if you want/need to defer? One-half of (12 x $235 x .9235 x .153) is hardly a sum needing deferral. Thanks in advance.

Hi Kay... my mom gets a monthly stipend of $235 from her old hospital employer as part of the union contract effected just before she retired. Her old tax accountant (thru last go-round) had previously entered it as self employment; i.e. independent contractor vs employee. (I am trying to do it this year, and it would have been easier for me had they not removed the short form.) A couple of questions... First, do I need to enter anything on lines 8a thru 8d, and then 9? If so, what? She has no W-2s, etc, and clearly, line 6 is the smaller amount. Second, does Part III only need to be entered if you want/need to defer? One-half of (12 x $235 x .9235 x .153) is hardly a sum needing deferral. Thanks in advance.

Sonia,
Yes, you don't have to defer any Social Security tax payments if you want to make them as usual. No deferral, no need to fill out the deferment section.
Thanks for reading.
Kay

If I don't want to defer any of my self-employment tax payments, can I skip filling out part III?

The old form (short form SE) was much clearer. I am retired as an insurance agent/registered representative and my income is largely pension and renewals/trail commissions. The new SE, with its farm vs non-farm and other restrictions and directions, is difficult to walk through. Does one have to be a farmer to isolate non-farm income? Are the income limits and variables based on pension and renewals? Etc. I would by far prefer to stick with the old form and have a separate form for farm workers and ministers etc.