IRS has mail urging it to make Tax Day 2021 later

The Internal Revenue Service is still working its way through millions of pieces of correspondence delivered last year, so the last thing it needs is more.

But it's getting it.

Federal lawmakers and organizations representing members of the tax community have mailed letters over the last week to the U.S. Treasury and IRS urging the delay this year of April's usual Tax Day.

April 15 is still THE day: Tax returns so far are still due on April 15, the traditional filing deadline. And the IRS Commissioner Charles Rettig is holding to that date. For now.

During a March 3 virtual tax conference hosted by the Federal Bar Association, Rettig reiterated his Feb. 23 testimony before the House Appropriations Committee Financial Services Subcommittee, in which he told lawmakers the IRS has no plans to extend the tax return filing deadline this year.

However, during that Capitol Hill appearance, Rettig also noted that a final Tax Day decision has not been reached.

So advocates of a later 2021 filing deadline have been putting on the pressure to convince the powers that be to delay Tax Day.

Here's a look at the mail (and more) sent so far to the IRS seeking a later 2021 tax filing deadline.

Letter from eight Ways and Means Democrats: The push for a postponed Tax Day by members of Congress began before Rettig's hearing appearance.

On Feb. 18, eight Democrats on the tax-writing House Ways and Means Committee sent Rettig a letter asking him to extend the current filing season.

"It has come to our attention that, due to the ongoing pandemic, many Americans continue to face the same challenges that necessitated extending the filing season last year," wrote the W&M members, led by Rep. Bill Pascrell, Jr. of New Jersey (and chair of the W&M Subcommittee on Oversight) and Rep. Danny K. Davis of Illinois (and chair of the W&M Subcommittee on Worker and Family Support).

Chairman joins effort: W&M Chair Rep. Richard Neal (D-Massachusetts) was a notable non-signer of the Feb. 18 letter to Rettig. However, the head of the tax-writing panel has come around to his colleagues' way of thinking.

Neal announced on March 8 that he and Pascrell have "called on the Internal Revenue Service (IRS) to extend the 2021 tax filing season, as the pandemic continues to impose titanic strain on the agency and on taxpayers."

In addition to the COVID-19 conditions and slower than normal (based on one metric) filing season, Neal and Pascrell also pointed out that taxpayers (and their tax advisers) soon will face even more tax law changes.

"On top of all that, once it is signed into law, the American Rescue Plan [the COVID-19 relief measure championed by the Biden White House] will change the tax laws applicable to unemployment benefits received in 2020 and reported on returns filed during this filing season," said Neal and Pascrell.

"Taxpayers need more time to file accurate returns and get their questions answered by the IRS," the Representatives continued. "Facing enormous strain and anxiety, taxpayers need flexibility now. We demand that the IRS announce an extension as soon as possible."

CPAs lead Tax Day change charge: The American Institute of CPAs (AICPA), the world’s largest member association representing the accounting profession, wrote the Department of Treasury and IRS on March 4 detailing why the filing deadline should be later in the year.

The tax difficulties created by the ongoing pandemic during the 2019 tax year have not abated, said the AICPA. "Those challenges and more still exist in the system, and taxpayers are struggling to resolve issues related to 2019 tax returns due to the IRS inventory backlog," noted the organization.

"Maintaining the April 15 filing and payment deadline does not reflect the real-world hardship and challenges imposed on taxpayers and tax professionals," argued the AICPA's latest letter. "Therefore, we urgently request that the 2020 Federal income tax, information returns, and payments (e.g., extension and estimated payments) originally due April 15, 2021 be granted additional time to file and pay until June 15, 2021."

The March 4 letter to Rettig and Mark J. Mazur, Treasury's Acting Assistant Secretary for Tax Policy, is a follow-up to one the AICPA sent Feb. 23, urging  Treasury and the IRS to provide taxpayers with more certainty and stability by announcing any pending tax filing and payment deadline postponements immediately.

In addition, in a Feb. 16 letter the AICPA elaborated on the hardships taxpayers and tax practitioners are facing in completing tax filings and called for relief from underpayment and late payment penalties for the 2020 tax year.

NCCPAP adds to IRS mail crush: In its March 8 correspondence arguing for a later filing deadline, the National Conference of CPA Practitioners (NCCPAP) focused on the practical problems facing tax professionals and their clients.

The letter to Treasury Secretary Janet, Mazur Rettig pointed out:

"Currently, the best estimates show that only about 15% of the population has been fully vaccinated. That percentage will not grow nearly great enough by April 15th to reach 'herd immunity'. The National Conference of CPA Practitioners (NCCPAP) prides itself on our focus of serving the individual and small business taxpayers. Many taxpayers are either reluctant to leave their houses to see their tax preparer or uncomfortable preparing their own returns — even with over-the-counter options. Technology is not always the answer either. Tax paperwork can often be voluminous and impossible to transmit electronically without high powered equipment and high-speed internet access — equipment that many taxpayers do not have. That puts an undue burden on the individual and small business taxpayers in this country."

The NCCPAP letter also cited additional filing complications. These include:

These matters, argues the NCCPAP, are why Tax Day 2021 should be moved to June 15.

NATP for more time, too: In its letter to letter to Rettig, the National Association of Tax Professionals (NATP) pointed to a recent survey of its 23,000 members "who are experiencing the reality of navigating tax season amid the current COVID-19 situation."

Seventy-one percent of those surveyed support a later filing deadline. 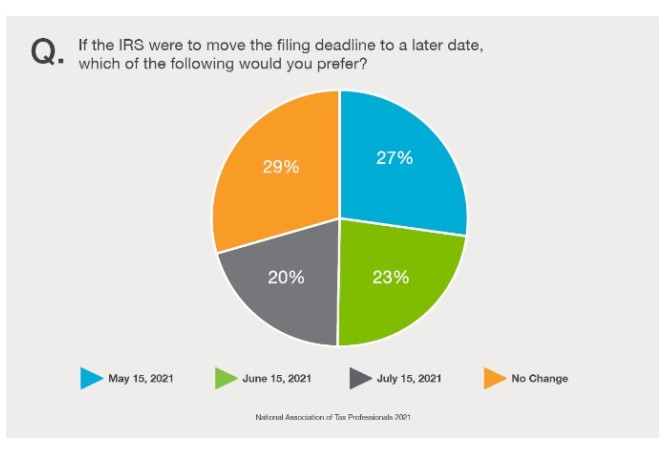 A key reason for wanting more time, noted NATP, is that preparers are still waiting on tax law guidance in many areas. "Without this, returns will be filed inaccurately and incompletely, and ultimately there will be a need for more amended returns to be prepared," said NATP Executive Director, Scott Artman, CPA.

"This not only increases the work for the preparer who is already dealing with a compressed tax season but will also result in additional expense to the taxpayers who will have to pay to amend their returns," added Artman.

Beyond April 15: The tax filing deadline obviously is the primary concern of, well, everybody who has to file or prepare (or both) a tax return in 2021. But some are writing to the IRS about other tax season 2021 matters.

Sen. Mike Crapo (R-Idaho), the ranking member of the Senate Finance Committee, along with previous Finance Committee Chair Sen. Charles Grassley (R-Iowa), on Feb. 12 wrote to Rettig about the agency's ability to administer changes to the Child Tax Credit (CTC) that are part of the American Rescue Plan.

The latest coronavirus relief measure raises the maximum benefit for most families, extends the benefit to more lower-income families and will provide some of the relief as monthly checks to eligible recipients.

"We have significant concerns about these proposed changes to the administration of the CTC without any hearing or debate to consider the possible ramifications of these changes and the challenges they may pose for the Internal Revenue Service," Crapo and Grassley wrote to Rettig on Feb. 12. Their worries included IRS assuming a role as a "social-welfare agency" and that the proposed changes would "exacerbate the potential for fraud in the CTC program.

A subsequent March 1 letter from the Senators (after getting what they said was an incomplete response from the IRS) underscores the difficulty the IRS (and taxpayers and their preparers) will have in meeting the April due date.

Crapo and Grassley note that briefings from IRS staff have indicated that the agency would need between 30 to 45 days to produce new forms and instructions to deal with the latest COVID-19 relief law change. Plus, if the CTC change is made permanent (a goal of the Democratic supporters of the change), the Senators say the IRS would need an additional 9 to 12 months to update its technology.

Timing is tight: The mass but separate mailings' consensus appears to be that taxpayers, tax professionals and even the IRS are swamped right now and could benefit from more time.

Tax pros are hoping it will and that the IRS will announce a new, later tax return filing (and more) deadline soon. The need for an official announcement ASAP is of particular concern since the March 15 corporate tax due date is next week.