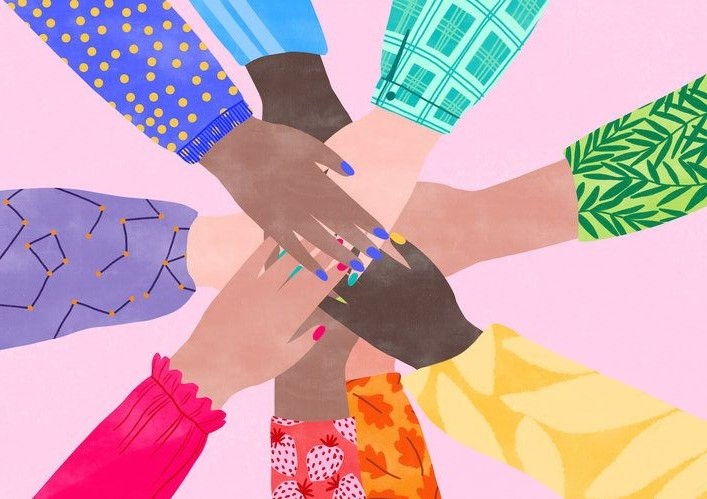 Happy International Women's Day (IWD), the global commemoration and celebration of women's successes. But it's also recognition that more work is needed before gender equality is achieved.

Organized efforts to focus on women's accomplishments and goals have been conducted globally since 1911, with the official March 8 date set in 1914.

This year, the IWD theme chosen by the United Nations is, not surprisingly, Women in leadership: Achieving an equal future in a COVID-19 world. The official IWD website is highlighting the #ChooseToChallenge on social media.

Emphasizing earnings: Economic equality has long been a focus of women's rights groups, on IWD and beyond.

Nearly 60 per cent of women around the world work in the informal economy, earning 23 percent less than men globally. That means they save and are at greater risk of falling into poverty. 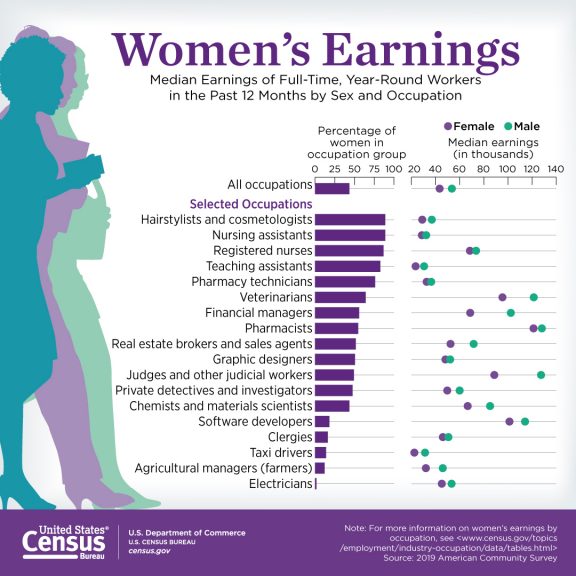 The gender pay gap has been a persistent problem, but U.S Census Bureau population survey data from 1961 through 2018 show the female-to-male earnings ratio of full-time workers has narrowed over seven decades.

In the 1960s and 1970s, the earnings ratio was stagnant, with women's pay hovering between 57 to 61 cents to the dollar of male earnings.

During the 1980s, the pay gap narrowed nearly 10 cents, marking the most income gain in any decade. But it took nearly another 30 years for women to gain the next 10 cents to reach 2018's ratio of 81.6 cents on the dollar.

The National Committee on Pay Equity (NCPE) says the pay gap is costly. NCPE estimates that over a working lifetime, the wage disparity costs the average American woman and her family an estimated $700,000 to $2 million, which also affects women's Social Security benefits and pensions.

At the current rate, it will take until 2059 for women to achieve equal pay, according to NCPE.

Education and gender pay differences: One interesting, and infuriating for women, anomaly is that more education doesn't necessarily close the gender pay gap.

The Census Bureau's American Community Survey shows that while overall wages rise with education, the pay gap broadens for women with higher levels of education. Bureau of Labor Statistics data from 2018 data show full-time, working women with a bachelor’s degree and higher only earn 75 percent of what their male counterparts do. 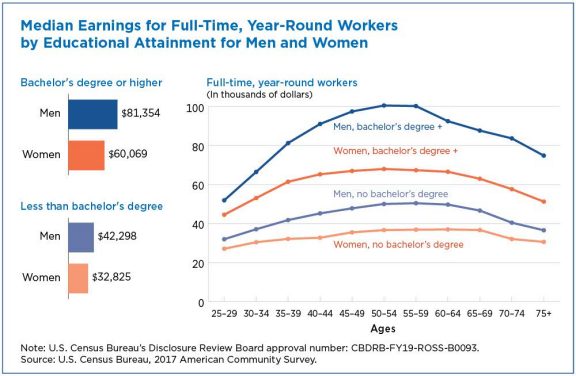 Of course, there are multiple issues to consider regarding education, gender and pay. The Census Bureau says the less pay for higher educated women phenomenon may be a reflection of factors related to age and experience as women workers with a bachelor's degree are younger on average.

Taxes and women: Because women generally make less money, tax reform advocates say that women are among those who are most affected by tax policies.

Studies across different countries have shown that women bear a disproportionate share of overall tax burdens, according to the Women's International League of Peace and Freedom (WILPF).

"The benefits of tax cuts for corporations and high earners largely bypass women, while they feel the brunt of regressive VAT [value added tax]/consumption taxes, as women tend to use larger portions of their income on food and basic goods for the household," argues the Swiss-based nonprofit, which has an office in the UN in New York City.

WILPF further maintains that tax policies tend to entrench traditional and increasingly outdated social norms of women caring for dependents and men being primarily responsible for a family's support.

"So, as well as direct effects on women's income, tax policies enshrine social norms and gender stereotypes that are profoundly discriminatory and constrain women's opportunities, political voice and progress towards equality," says WILPF.

Janet G. Stotsky made a similar observation almost a quarter century ago in her article How Tax Systems Treat Men and Women Differently.

"[M]any tax systems exhibit gender bias — they treat men and women differently in ways that can negatively affect their decisions on whether and how much to work, their personal consumption habits, and their overall tax liability," wrote Stotsky.

"While it is easier to detect gender bias in personal income tax arrangements, gender bias — explicit and implicit — may be present in other taxes such as consumption taxes and import duties. Gender bias may also be found in the way payments are linked to the receipt of benefits under social insurance programs," Stotsky added.

Chipping away at gender (and tax) bias: Taxes and women aren't likely to get a lot of attention during today's International Women's Day activities. But some progress is being made toward helping lower-income earners regardless of gender.

The most recent example some of the family-friendly provisions in the American Rescue Plan, more popularly known as the third major COVID-19 economic relief bill, which is expected to become law as soon as this week.

In the meantime, take some time on this 2021 IWD to recognize the integral role women play for their families and the economy overall, as well as the need for additional changes to achieve further gender (and financial) equality.