IRS clarifies when a cryptocurrency transaction isn't a tax transaction

The tax world is full of instances that are different from the real world.

There are quarterly estimated tax payments that don't align with our standard calendar quarters.

There are birthdays that are considered having been celebrated earlier when we get older.

IRS has crypto questions: Cryptocurrency, often referred to generally as bitcoin (the Kleenex tissue of virtual money), has been a target of the Internal Revenue Service for years. Most recently, the agency has focused on getting taxes due on crypto transactions.

To do that, the IRS is trusting cryptocurrency owners to truthfully answer a question about their virtual money holdings. Since the IRS treats crypto as property, meaning that taxes typically aren't an issue until the owner does something with it, the agency for the last couple of years has asked filers about those potential crypto transactions.

Specifically, it has asked them if at any time during the tax year for which they are now filing a return, if they received, sold, sent, exchanged or otherwise acquired any financial interest in any virtual currency? Last year, it was on Form 1040's Schedule 1 (shown below).

That same question — "At any time during [the prior year], did you receive, sell, send, exchange, or otherwise acquire any financial interest in any virtual currency?" — is back on the 2020 tax year return. This time, though, it's on the front of the revised Form 1040.

The move was made because not all filers use Schedule 1. That means they might miss the query, which was written by none other than IRS Commissioner Chuck Rettig himself.

Transaction, not transaction: The single-line, yes-or-no checkbox question is pretty self-explanatory. But then, we are talking taxes.

So the IRS has a whole frequently asked questions and answers page about taxes and virtual currency transactions. And it recently updated those Q&As, now noting what is not a transaction for IRS purposes. 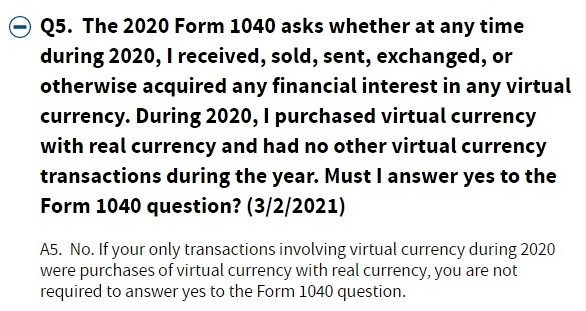 And here's the text, in case you can't see the image on your device:

So, despite the "otherwise acquire" phrase in that question, buying cryptocurrency with actual, real, put-in-your-pocket U.S. money (or other ways to access those funds) is not a financial transaction.

Glad we, and by we, I mean the IRS, cleared that up.

Other recent crypto happenings: The IRS isn't alone in its interest in cryptocurrency. Some of the world's richest people are big fans of the, uh, properties.

Jack Dorsey, the tech entrepreneur who co-founded and still is CEO of Twitter, is auctioning off the first-ever tweet — "just setting up my twttr" — on the platform. It's been listed it as a unique digital signature on a website for selling tweets as non-fungible tokens (NFTs).

The digital auction ends on Sunday, March 21, and Dorsey, a big bitcoin fan, says he will convert proceeds from the winning bid to that virtual currency and then donate it to charity.

Elon Musk is another cryptocurrency enthusiast. The electric auto maker and space travel engineer and promoter favors Dogecoin, repeatedly tweeting about it.

And in an official Securities and Exchange Commission filing this week for his eponymous car company, Musk appeared to again sneakily tout crypto.

In the March 15 SEC Form 8-K submission, it was noted that Tesla's chief financial officer, Zach Kirkhorn, will now be known as the "Master of Coin."

Musk also revealed in that same filing that in addition to being chief executive officer of his namesake company, he also now is Technoking of Tesla.

I give him credit for a stab at humor and not capitalizing the letter "k" in technoking.

SpaceX success…then not: I also am impressed with his audacity and confidence in the wake of SpaceX's recent explosive, literally, problem.

As the video below shows, the Starship SN10 spacecraft touched down successfully after a high-altitude test flight today on March 3. That was a major milestone for SpaceX and Musk's Mars ambitions. But the vehicle didn't manage to hold itself together and exploding about eight minutes after landing.