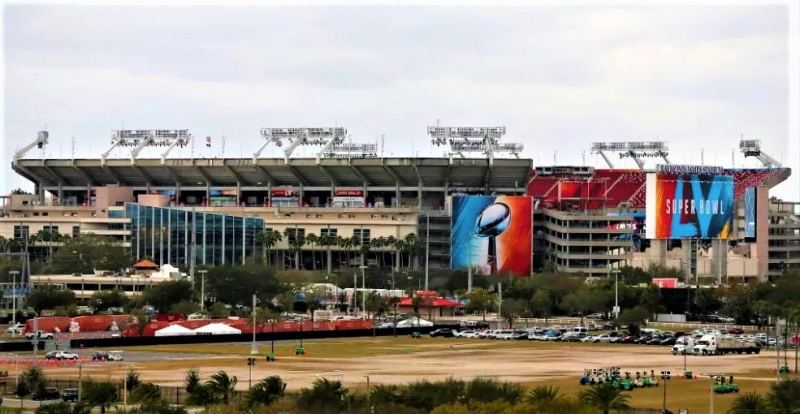 The Tampa Bay Buccaneers literally will be the home team in Jan. 7's Super Bowl LV. The NFL championship game is being played at their stadium. The Kansas City Chiefs, however, are still favored by bettors to win the title.

We're not back to normal, but the National Football League is doing all it can to keep its traditions, and team bank accounts, on track.

Despite some issues in 2020, the NFL played out the season last year. On Sunday, Feb. 7, it will crown its champion in the annual Super Bowl.

This 55th big game has a lot, in addition to being played during a deadly pandemic, to set it apart.

Football championship firsts: The National Football Conference champion Tampa Bay Buccaneers will be playing for the crown at their home stadium, Raymond James Stadium in Tampa, Florida. This is the first time this has happened. No conspiracy theories here, though. The home team designation was pure coincidence.

Sunday's game also will mark Tampa quarterback Tom Brady's first championship match outside of New England, where he spent the first 20 seasons of his career with the Patriots. On the sidelines, it will his coach Bruce Arians' first Super Bowl as a head coach.

And with Patrick Mahomes leading the American Football Conference titlist and defending Super Bowl champion Kansas City Chiefs, it will be the first time in which the previous two Super Bowl Most Valuable Player-winning QBs have faced off in the next championship game. Brady was the MVP when he and the Patriots beat the Los Angeles Rams in February 2019. MVP Mahomes led the Chiefs to victory last year over the San Francisco 49ers.

The more things change…: But some things definitely will be the same on Sunday, Feb. 7. The time it takes to get to the actual kickoff will take much too long, with lots of filler television programing on all day. People will still make guacamole, although for (we hope) smaller, safer, socially-distanced for COVID-19 viewing parties.

And people are still betting on the game's outcome and, more fun, on all its ancillary activities.

These so-called prop bets get their name because they are propositions that typically are phrased as a question on whether something will or will not happen. Some have to do with what will happen on the field during the game, like who will score the first touchdown. Other wagers focus on events such as the singing of the National Anthem and the usually overhyped halftime show.

There's basically a bet on just about anything that's even remotely related to the Super Bowl. And these prop bets account for around 50 percent of the big game's wagering handle at many sportsbooks.

Here are some of my favorite prop bets from the hundreds that bookies say they're taking this year. Just so the hubby doesn't freak out, I found these via the magic Google machine, not because I'm placing any. I spent all my 2021 discretionary wager stash last month on losing Powerball and Mega Millions lottery tickets.

Game-specific props: With all-star quarterbacks leading each team, the aforementioned matchup of former Super Bowl MVPs is getting a lot of action.

Right now, Mahomes is the slight favorite to take the MVP title again. I agree and not just because Patrick and I both went to Texas Tech University, albeit decades apart. He's an incredibly talented athlete and clutch playmaker.

If Mahomes does hoist this year's Super Bowl MVP trophy, that likely will mean he and his Kansas City teammates also get to parade the Vince Lombardi hardware. Dallas Cowboys linebacker Chuck Howley in Super Bowl V is the only player voted as MVP from a championship losing team. Yeah, I had to get in that 'Boys reference from days when I was youthful fan since the recent Dallas teams have been so disappointing.

As for the plays that will lead to the crowning of Super Bowl LV champion, there are plenty of prop bets.

Who will throw the most touchdowns, Brady or Mahomes? And how many will each throw? In keeping with the for-now betting favoritism for the Chiefs, Mahomes has the edge.

Other passing game props for each quarterback include which player will make the first reception for each team, which will catch the first touchdown pass, how many attempts will each QB make, how many will be completed, how many will be intercepted and the distance of Mahomes' and Brady's longest caught pass.

Similar bets are being placed for each team's running games and for defensive moves like interceptions, fumble recoveries and sacks.

Beyond the field: Now to the really fun not-just-the-game wagers.

Will the coin toss turn out to be heads or tails and which team will win it?

What will be said first by television announcers, COVID-19, coronavirus or pandemic?

What color sports drink will be dumped on the winning coach?

How many times will Brady's former New England coach Bill Belichick be mentioned? You can take an over/under or go with a specific number.

How many commercials will feature a dog?

How many TV shots will we get of a coach with his mask falling off his nose?

What will be the primary color of Mahomes' headband? Red, both the Chief's usual base color and also from his days as a Texas Tech Red Raider, is the favorite choice. He could go for black, though, and still be true to his school.

Sing it loud: As for Super Bowl songs, you can wager on how long it will take for the game-opening national anthem to be sung. This year's performance could be longer than usual since there are two singers.

Eric Church and Jazmine Sullivan are teaming up for the first anthem duet since Super Bowl 40 in 2006 when Aaron Neville and Aretha Franklin opened the event.

The 2021 anthem duo's differing styles — Church is a little bit country and Sullivan is a lot R&B — also has some betting on the elements of the performance. Which genre will dominate? Will they be able to meld their styles for this one, momentous song? That last question is especially relevant, for music if not wagering reasons, since each signer has said they never heard the other before being asked to perform together.

Then there's the halftime show. You can place bets on which songs headliner The Weeknd will sing and which will he perform first.

And of course everyone wants to know, for basic curiosity as well as betting purposes, will he be sporting the bandages we saw at other The Weeknd appearances last year?

Wager wisely: OK, I know lots of folks will see that subhed advice as oxymoronic. But if you are going to bet, follow the first rule of wagering. Don't bet more than you can afford to lose.

Also note that as with all gambling and sporting events, things can change quickly. If you're planning to put down a few (or more) dollars, keep your bookie on speed dial or, more likely, stay signed on to your online wagering option.

To get an idea of what other bettors are thinking, VegasBetting.com has a list of current Super Bowl related odds and some explanations as to why bets are trending a certain way.

The New York Post has what it says are some low-key Super Bowl 2021 prop bets that are more likely to pay off for bettors.

If you watch the Super Bowl for the TV ads instead of the game, you'll want to check out My Bookie's odds on commercial prop ads. There are fewer big ads this year, again due to COVID, but it's always fun to see what agencies come up with for this bright television spotlight. If you don't want to wait, some have already been released on online, either in full or as previews.

You also can find out more about prop bets in general at Casino.org's piece that promises Everything You Need To Know About Prop Betting.

Now for the tax part of our game: And now it's time for the part of the post you knew was coming, my annual obligatory reminder that if you win any bet, from a scratch-off lottery drawing to a local raffle to a Super Bowl wager (prop or otherwise), your winnings are taxable income that you must report to the Internal Revenue Service.

Uncle Sam would greatly appreciate it if you would follow through after your big take. He's been shorted for ages when it comes to taxes paid on wagering.

The IRS' collection predicament remains even though there are more legal ways to wager now. Bettors no longer have to travel to Nevada to place sports bets, thanks to the Supreme Court ruling that gave states the right to legalize gambling within their borders. This expanded legal wagering means there's more reporting to the IRS of taxable winnings, but it still doesn't guarantee the IRS is getting its full legal cut.

So take into account any taxes you'll owe on your winnings when you wager. You don't want to bet that the IRS won't ever find out about your unreported winnings. When it does, and odds are it eventually will, you'll then owe penalties and interest as well as the tax on the previous unreported income.