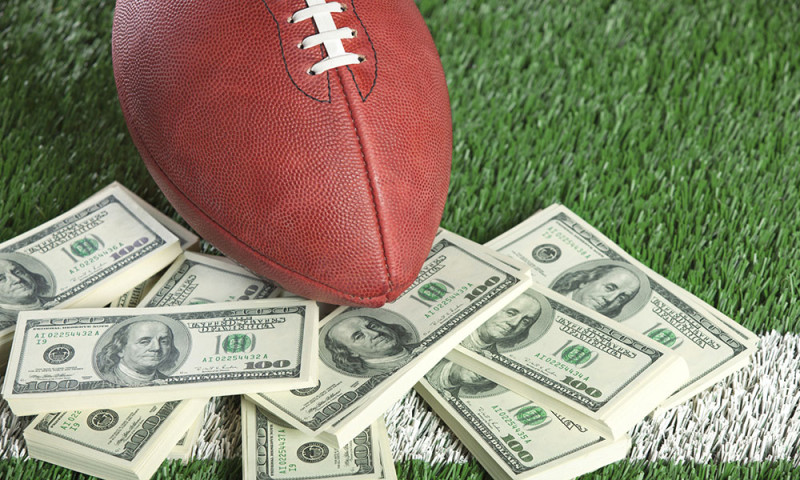 The debate continues about whether gambling really provides states with substantial revenue. But one thing is settled. Regardless of how much, or little, money wagering brings into state coffers, it's here to stay.

And Super Bowl Sunday is one reason more states are allowing sports betting within their borders, an option hey were given thank to the 2018 Supreme Court decision.

As today's Super Bowl LV gets ready to kick off, 23.2 million Americans plan to bet a total of $4.3 billion on the matchup between the Kansas City Chiefs and Tampa Bay Buccaneers, according to new American Gaming Association (AGA) research.

Online gambling accelerating: Among Super Bowl bettors, notes the AGA, are a record 7.6 million who will wager via online sportsbooks this year, up 63 percent year-over-year.

Given that impressive (or disturbing if you're anti-gambling) growth, the 63 percent increase in online betting is this week's By the Numbers figure. 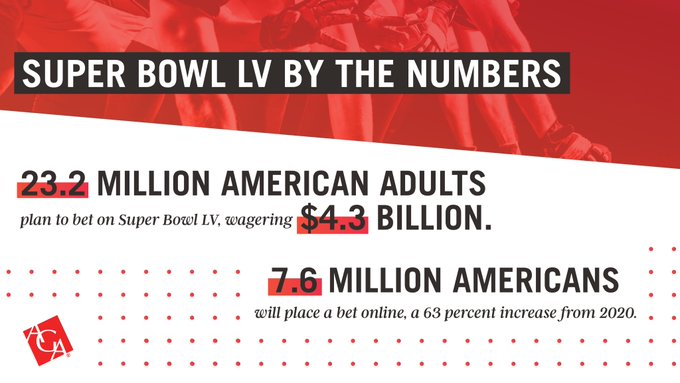 "This year's Super Bowl is expected to generate the largest single-event legal handle in American sports betting history," said AGA President and CEO Bill Miller. "With a robust legal market, Americans are abandoning illegal bookies and taking their action into the regulated marketplace in record numbers."

A bump, but not consistent: But despite today's betting bump, The Tax Foundation says it is very unlikely that revenue from sports wagering will have any meaningful impact on budget shortfalls.

Still, states will take what money they can get from their regulation and taxing of the wagers within their borders. And their residents, as well as visitors from less gambling friendly states (pay attention, Texas legislators!), will keep handing over their dollars.

Most of the bettors, says the Tax Foundation, will place their wagers in New Jersey, Nevada, Illinois and Pennsylvania. An average of these four states' tax rate is 17.6 percent. At that rate, $25 million of adjusted revenue raises $4.4 million in state tax revenue.

This is a modest figure, but the Super Bowl is just one of thousands of sporting events wagered on across the world in any given year, writes Boesen.

Successful wagers produce taxable income: The winnings also will be taxed by the federal government as well as by most states' revenue departments.

And despite the limits imposed due to COVID-19, 2020 was a good year for the sports betting industry, according to the Tax Foundation. Americans spent more than $20 billion on sports betting throughout the year, with the previously mentioned betting meccas of New Jersey, Nevada and Pennsylvania as the largest markets. This activity generated more than $200 million in tax revenue in the states.

The Tax Foundation map below shows the state tax rates on sports betting. 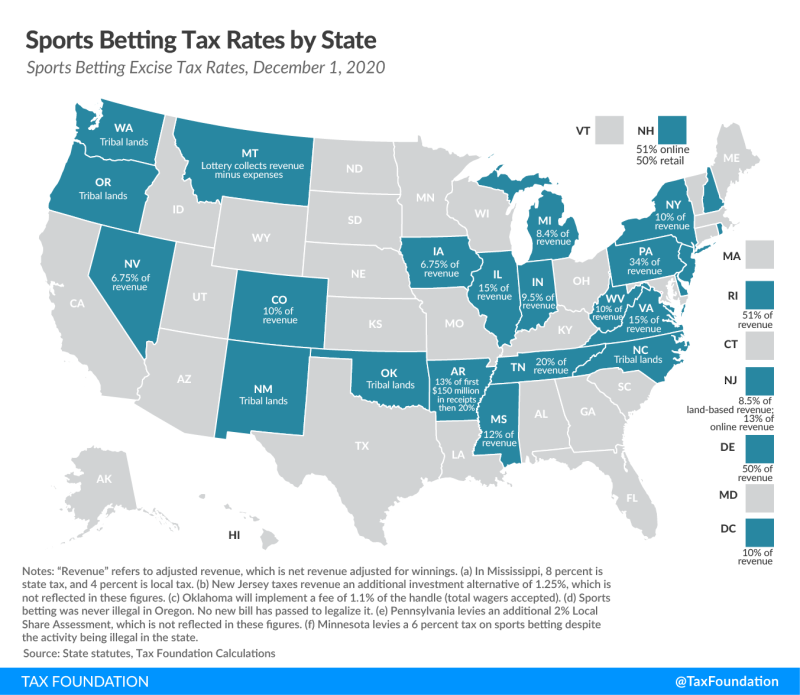 Illegal wagers still the way for some: The record growth of online betting cited by the AGA was a key way around the coronavirus closures that hampered traditional betting. That's going to cost the seven states that do not allow online betting: Arkansas, Mississippi, New Mexico, New York, North Carolina, Oklahoma and Washington.

Those states, along with states that have not legalized any sports wagering, are more likely to have residents turning to illegal bookies. And we all know there's no way any of those illicit by still taxable winnings will be reported to tax collectors.

Winnings from friendly bets among office mates are taxable, but again, few ever tell the Internal Revenue Service or their state tax office about the $200 they got via the office pool.

Not all bets are in cash: Technically, the value of services or products won also are taxable, but I suspect that tax requirement might slip even among the members of Congress from the Super Bowl contending teams' states who have made what they are calling a friendly wager on the game.

Reps. Emanuel Cleaver (D-Missouri) and Sharice Davids (D-Kansas), both of whom are from the greater Kansas City metropolitan area that spans both states, have agreed to a wager with Tampa Bay, Florida-area Democratic Reps. Charlie Crist and Kathy Castor.

If Tom Brady and the Buccaneers win, Cleaver and Davids will "provide world-famous KC barbeque and wear Buccaneers masks on the House Floor when Congress is back in session."

Should the Patrick Mahomes-led Chiefs win, Crist and Castor will deliver "beloved local Latin guava pastries," as well as flan and Cuban sandwiches and wear Kansas City masks on the floor of the House.

Good luck to all, whether you're just cheering or have some money riding on the game. And regardless of the outcome, based on the goodies on the line on Capitol Hill, those members will all be winners.