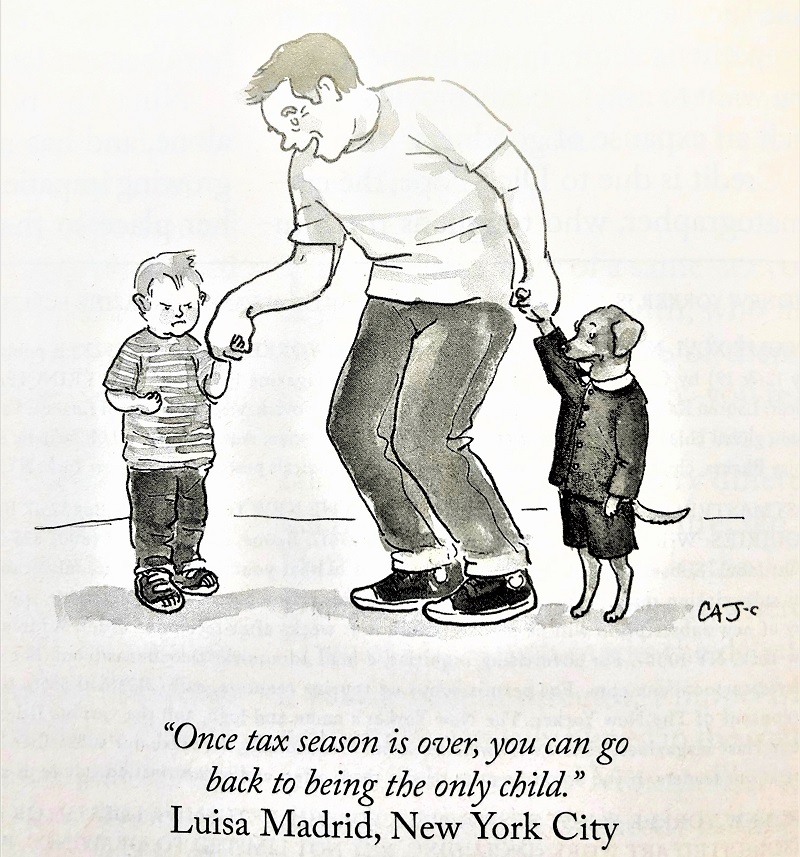 I'm not sure if Luisa Madrid is a tax professional, but her winning caption for the New Yorker magazine contest sure hits home at filing season. One of the oldest tales of pushing the tax return envelope is taxpayers who try to claim pets as dependents.

Children. They're a challenge. They're a joy. They cost a lot. A whole lot, if you ask parents.

They also provide some tax breaks.

And if the Biden Administration and some in Congress have their way, children could be worth even more in the proposed next round of COVID-19 relief.

Things are still in flux, one area of financial assistance getting a lot of attention is President Joe Biden's proposed $3,000-per-child benefit to the nation's poorest families. Some economic analyses estimate that the move could cut child poverty in the United States by as much as 50 percent.

However, the proposal, which is part of Biden's American Rescue Plan, has made it through the first legislative step. The House Ways and Means Committee last week completed its mark-up of the tax components in the $1.9 trillion coronavirus economic relief package.

The expanded Child Tax Credit (CTC) of $3,000 per child (or $3,600 for children younger than age 6) is in the bill. The credit, which means the money could wipe out an eligible taxpayer's tax liability dollar-for-dollar, also is refundable, meaning the taxpayer gets any excess credit money after the taxes are paid. It also could be issued to eligible parents in advance of filing season.

While there still is a lot to be hashed out on Capitol Hill, it looks like some additional aid in the form of a child-related tax break will be in there. And since the enhanced CTC is in there, this weekend's Saturday Shout Out goes to five pieces on the topic.

Jeff Stein, White House economics reporter for The Washington Post, says that passage of the financial aid is just one concern. Implementation could be even more troublesome. "[H]aving the IRS stand up a new program starting in July to send payments for approximately 66 million American children could prove a challenge," writes Stein.

But, notes Wall Street Journal politics reporter Gabriel T. Rubin, "The CTC plan to provide a $250-$300 per child monthly benefit to families comes with a nearly $400 million one-year bump to IRS funding, ostensibly to ease the administrative burden of a major new program. It's the first step by Democrats to revive the beleaguered IRS, which has seen inflation-adjusted funding drop by over 20% since 2010 and the elimination of over 22% of its staff."

Megan Leonhardt, senior money reporter with CNBC Make It, looks at how some lawmakers want to go further. The current CTC expansion is just for 2021, but writes Leonhardt, some Democrats want to make the increase permanent.

Lest you think it's just Democrats, Sen. Mitt Romney (R-Utah) also wants to permanently increase the CTC to $3,000 per child ($4,200 for a child under age 6) and would allow 17-year-olds to qualify. He also wants the credit to be paid in advance by having the Social Security Administration send monthly payments of $250 per child ($350 per child under age 6) to qualifying families. But, there's one catch. " He wants to pay for his proposal by eliminating three popular tax breaks," writes Joy Taylor, editor of The Kiplinger Tax Letter.

And to wrap things up, the Tax Foundation provides an overall look at the current CTC and what the proposed changes would mean. Garrett Watson, a senior policy analyst with the Washington, D.C.-based tax policy think tank, and his colleague Erica York, an economist with the nonprofit, also note that the advance payment component could create some problems, for example, when there are miscalculations in a recipient's income or a change in filing status. "The details of the Democratic Child Tax Credit plan suggest more work needs to be done to ensure taxpayers are not saddled with surprise tax bills after receiving advanced CTC payments," write Watson and York.

As these Saturday Shout Outs indicate, while the goal to help financially strapped parents is laudable, it won't be easily accomplished. The White House, Congress and IRS, which I hope has been involved in conversations, have a lot to consider as the American Rescue Plan proceeds.