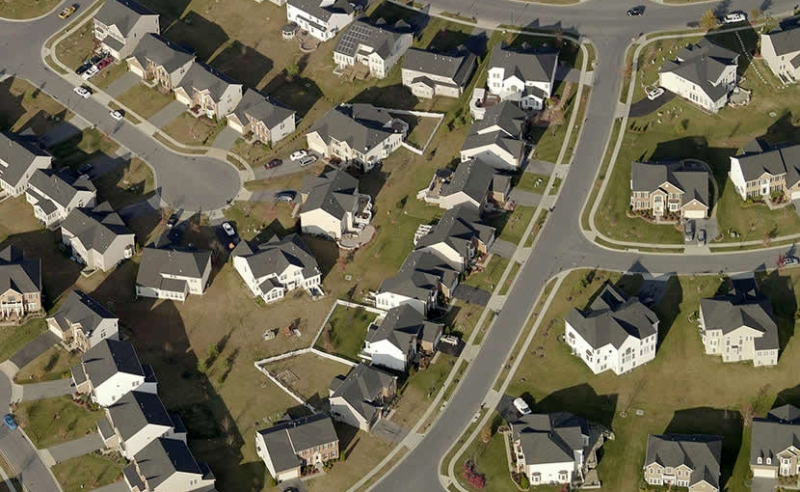 Neighborhoods like this one are major tax revenue sources in many states. (Photo by Pictometry)

Much is made here in Texas about our lack of a personal income tax, but I can tell you that doesn't mean millions of us residents are tax-free.

There's a 6.25 state sales tax. And Austin is among the cities that also tacks on another 2 percentage points, meaning we pay 8.25 percent tax on most of our purchases.

Then there's the county-collected annual tax on our home's value.

Property tax pain: I paid our annual residential property tax bill this weekend and I can assure you that the Travis County tax assessor collector is making out like a bandit, at least in our neighborhood.

It's the same scenario in many urban/suburban areas in the Lone Star State.

That's because here in Texas, state and local programs must have money to operate. If the funds don't come from individual income taxes, lawmakers look elsewhere.

I know, it's unseemly to whine about my house being considered relatively expensive, at least by the county tax assessor-collector. But until I sell, the abode's value is an annual tax pain in the pocketbook.

My only consolation is that my first-world problem is felt not just in parts of Texas, but across the entire United States.

U.S. real estate reliance: The Tax Foundation, a Washington, D.C., nonprofit that tracks tax policy, recently updated its analysis, based on the most recent available data, which is from fiscal year 2018, of how much each state relies on property taxes.

My only surprise in these newest numbers was that Texas ranked fifth. I know Austin is a hot real estate market and there's lots of less pricey property in the less populated portions of our big state, but I thought it might challenge for the top spot here.

Or many that's just my annoying native Texas penchant for wanting to first, even in areas where that definitely is not desirous.

Alaska comes in second, with property taxes accounting for 45.6 percent of the Last Frontier's tax collections in FY 2018.

In addition to sharing a reliance on property taxes, the Granite State and Last Frontier share a couple of other attributes.

New Jersey, Texas and Vermont round out the Tax Foundation's ranking of the top five states that count, excessively in the eyes of those of who pay them, on property tax collections.

Not so property dependent: The place President Joe Biden calls home and the Yellowhammer State are at the other end of the property tax reliance spectrum, according to the Tax Foundation's analysis.

Delaware at #50 and #49th ranked Alabama raised the smallest portion of their state and local tax revenue through property taxes, bringing in 16.8 percent and 16.9 percent, respectively, from real estate tax collections.

Joining these two as the five least reliant on real estate assessments are Hawaii, Arkansas and Oklahoma.

If your state isn't at either extreme, you can see where it falls as far as property tax reliance in the Tax Foundation map below. 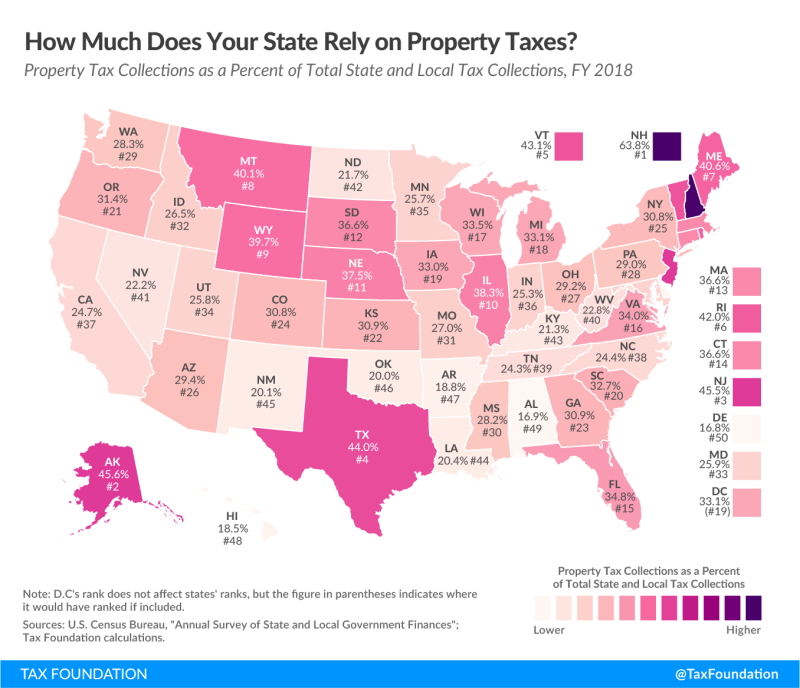 That 71.7 percent of local tax collections nationwide tally earns this week's By the Numbers figure.

In that same year, says Cammenga, 25 states and the District of Columbia collected the greatest share of their combined state and local tax revenue from property taxes. In fact, property taxes the largest share of local revenue in all but two states, Arkansas and Louisiana, both of which have high local sales taxes.

Different taxes pose different burdens: If, like me, you think about moving every year when you get your home's assessment and/or property tax bill, don't call North American or Mayflower just yet.

Also, she notes, states and localities that generate less revenue through property taxes tend to depend more on general sales taxes, individual income taxes, corporate income taxes, excise taxes, among others. And state governments may assume a greater responsibility for funding local governments or local schools in these areas.

Taxes just part of the residency riddle: The bottom line is that the tax men and women cometh for us all. They just take different routes.

Which tax is dominant in a particular state (or more local jurisdiction) might have some bearing on your residency choice. For example, if you're retired, a low or no earned income tax rate doesn't matter as much as what you have to pay on purchases or your home's value.

So be sure you take all factors into account. There are other reasons than taxes — Really! — that need to be considered when deciding where to live.