Millions of taxpayers are facing a deadline at the end of this week.

No, unfortunately I am not talking about the Jan. 15 mark that the Internal Revenue Service is required by law to meet in distributing the second round of COVID-19 economic relief payments.

I'm talking about paying Uncle Sam instead of getting money from him. The final estimated tax payment for tax year 2020 is due on Friday, Jan. 15.

Taking care of taxes yourself: Around 22 million individuals file these extra tax payments, which total four if you make them for the full tax year.

They are the income taxes due — and self-employed taxes, too, for people who are their own bosses — on income that isn't subject to payroll withholding.

This year, many new filers have joined the estimated taxpayer ranks, in large part due to the coronavirus pandemic.

When their regular salaried hours were reduced or eliminated altogether as business closed last year, they turned to gig work. Others, in historic numbers, were forced to take unemployment benefits to help make ends meet.

Either way, that income is taxable and in most cases is not subject to payroll withholding. You can opt to have taxes withheld from your monthly unemployment amounts, but few do because they need every cent to pay bills.

That means you have to pay the income taxes on this money yourself by making estimated tax payments.

Four additional tax payments: If you make money year-round that subject that requires you make estimated tax payments, then you typically make four payments a year.

They're referred to as quarterly, but they don't really follow the standard calendar quarters. Instead, the tax deadlines and the earnings periods to which they apply are shown in the table below.

If the 15th that an estimated tax payment is due falls on a weekend or federal holiday, then it moves to the next business day. (For all you especially nerdy tax blog readers, last year's COVID-19 complications pushed 2020's first and second quarter estimated payments to July 15, the same day as the delayed filing season due date for regular returns.)

Deadlines also are changed at the discretion of the IRS when taxpayers are affected by major disasters. That's the case for some Mississippi filers who live or own businesses in several counties hard hit by Hurricane Zeta last October. They now have until March 1 to make their final tax year 2020 estimated payment. You can find more on this and other deadline changes in this post on the revised Mississippi tax due dates.

You can get a fuller picture of the general rules covering these added payments in my post with the scoop on paying estimated taxes. But here are some highlights.

Equal payments preferred: The IRS prefers that you guesstimate early in the year how much money you expect to make that's subject to estimated tax. Then it likes you to divide that amount by four and make equal estimated tax payments on all four due dates.

You can pay them via a variety of electronic tax options. If you're old fashioned, you can snail mail a paper check or money order, along with the appropriated 1040-ES voucher. The one for the fourth installment due later this week is shown below.

If you go the U.S. Postal Service route, as long as your envelope is postmarked Jan. 15, the IRS will count you has having timely filed.

Or unequal if you're up for extra work: What if you didn't get unemployment benefits or earn money as a contractor until August, after the first two estimated payments were due? No worries.

You just need to start making your estimated payment on the due date of the appropriate quarter(s) in which you made the money.

In fact, some folks make careful note when they make their 1040-ES money and how much in each tax period. Then they pay estimated taxes only on the actual money they made in those periods, rather than the equally divided guesstimate, even when they get the cash year-round.

This is known as the annualized method. It takes more effort, not only in record keeping, but also whey you file your annual Form 1040. At that time, you'll also have to worth through Form 2210 to detail how much you made in each quarter the tax you paid on it.

So why go to the added hassle? If you have estimated tax earnings only part of the year, or if they fluctuate widely from quarter to quarter, this method gives you better control over your cash flow (and taxes).

If you used the four-equal-payments estimated tax method, you'd pay $2,500 each quarter, even in the third one when you had no money subject to tax and in the first and fourth quarters, where your earnings were less than the 1040-ES equal-payments amount.

By figuring each quarter separately, you'll meet your estimated tax obligations, but only have to pay the actual amount due for each quarter. 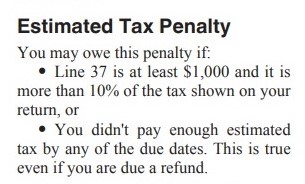 Don't ignore or underpay estimated taxes: OK, not worth it, you say. Fine. Stick with four equal installments.

Just be sure to make the payments, regardless of which method you choose.

If you ignore your estimated taxes totally or grossly under estimate what you owe, you could end up owing even more in penalties and interest.

And note that those added assessments are calculated per estimated tax period because our system is pay as you earn.

Finally, if you pay state estimated taxes, it's likely that your state tax department follows the IRS calendar. Double check and if so, don't miss these added state payments either.

So mark Friday, Jan. 15 on your calendar and send the IRS (and your state tax collector if applicable) at least some estimated tax money on your non-withheld income.