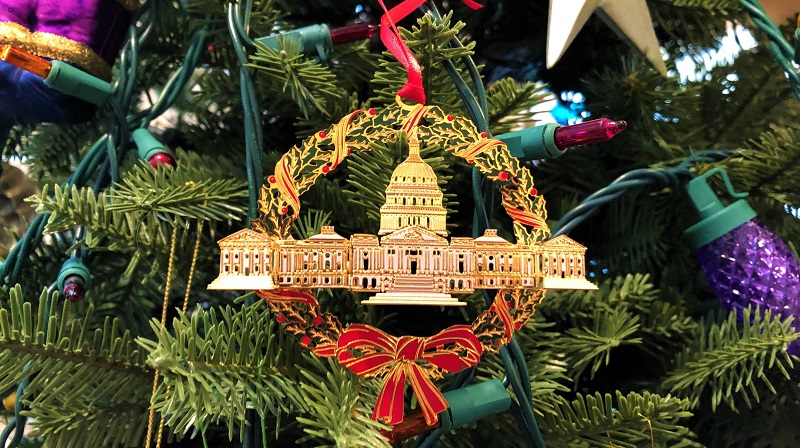 One of the many U.S. Capitol ornaments that adorn our Christmas tree each year. (Photo by Kay Bell)

We all have our holiday traditions. That includes Congress.

Almost every year, Representatives and Senators return to Washington, D.C. in December to take care of must-pass legislation. This year, there are two big items on the legislative to-do list.

One is to approve federal government funding for the remainder of the 2021 fiscal year. Without that money, Uncle Sam's offices nationwide will shut down (again). That's definitely the Congressional equivalent of Santa putting coal in stockings!

The other issue is another COVID-19 economic relief package. The first/last one, the Coronavirus Aid, Relief and Economic Security (CARES) Act, was enacted in late March. Many of its provisions have already been implemented. Others are set to expire at the end of the year.

In all cases, folks are clamoring for more financial help this holiday season … and beyond. 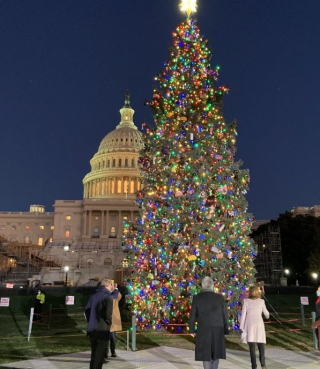 This year, the Christmas tree on the West Lawn of the U.S. Capitol is from the Grand Mesa, Uncompahgre and Gunnison National Forests in Colorado. (Image courtesy U.S. Capitol Christmas Tree Facebook page and Colorado Public Radio)

No, this is not the huge decorated fir on the U.S. Capitol's grounds.

It's a mish-mash of proposals that lawmakers try to tack onto must-pass bills. Those crucial laws are the figurative tree, with all the sundry laws serving as those odds-and-ends ornaments that are always at the bottom of the storage box.

One such bauble that's getting some attention right now is a proposal to increase next year's cost of living (COLA) bump for Social Security beneficiaries.

Earlier this year, the Social Security Administration announced that older folks getting these monthly retirement checks would see them go up by 1.3 percent. On the heels of that announcement was word that the cost of Medicare's Part B coverage, paid by those program's recipients, would go up 2.69 percent in 2021

COVID-19 costs to older Americans: Then there are the costs of the coronavirus pandemic. Rep. Peter DeFazio (D-Oregon) cited these added health care expenses when he introduced H.R. 8598, the Emergency Social Security COLA for 2021 Act.

The bill would replace the 1.3 percent 2021 Social Security COLA increase with an emergency 3 percent hike for the coming benefits year.

Senior citizens are facing additional financial burdens in order to stay safe, said DeFazio in a statement accompanying the introduction of his bill on Oct. 16. "This absolutely anemic COLA won't even come close to helping them afford even their everyday expenses, let alone those exacerbated by COVID-19."

DeFazio's proposal, which has 95 cosponsors, also is getting support from Social Security advocates.

"Replacing the announced 1.3 percent COLA with an emergency 3 percent increase is a way to provide a more fair and adequate inflation adjustment to beneficiaries," said Mary Johnson, Social Security and Medicare policy analyst for The Senior Citizens League, in a statement today (Dec. 8) in support of the DeFazio proposal.

The added money also would be felt across the wider economy, added Johnson.

"Because retirees tend to use their Social Security benefits to pay for essentials such as housing and healthcare, it would be a way to help stimulate the economy and to put younger adults back to work, which in turn, means stronger funding for Social Security and Medicare as well," said Johnson.

Timing is tight: Right now, it looks like Congress will give itself another week to work out the government funding bill. With the Dec. 11 deadline almost here, both the House and Senate are amenable to a week-long continuing resolution to cover federal operations through Dec. 18.

Is that enough time for DeFazio to make his case that the 3 percent Social Security COLA should be a part of the bill? Perhaps.

Or he might wait and try to roll it into a wide-ranging retirement bill, dubbed the SECURE Act 2.0. This is a follow-up to the Setting Every Community Up for Retirement Enhancement (SECURE) Act, which was — you guessed it — enacted at the end of 2019.

If DeFazio's COLA change does eventually take effect, it would be welcomed by millions of the Social Security beneficiaries who rely of this government retirement money.

Taxes on Social Security, redux: Some of them also will end up paying tax on their earnings. I explored that possibility in Tax Form Tuesday post back in October after the 1.3 percent COLA was announced.

With the possibility that the COLA could be more, that post — Social Security recipients to get bigger benefits in 2021, but some retiree money could be taxable — earns a Tax Form Tuesday reprise today.

It looks at Form SSA-1099, Social Security Benefit Statement, which is issued by the Social Security Administration each January to federal retirement benefits recipients so they'll know just how much they received the prior year. You'll need that information if you happen owe federal tax on the amount. 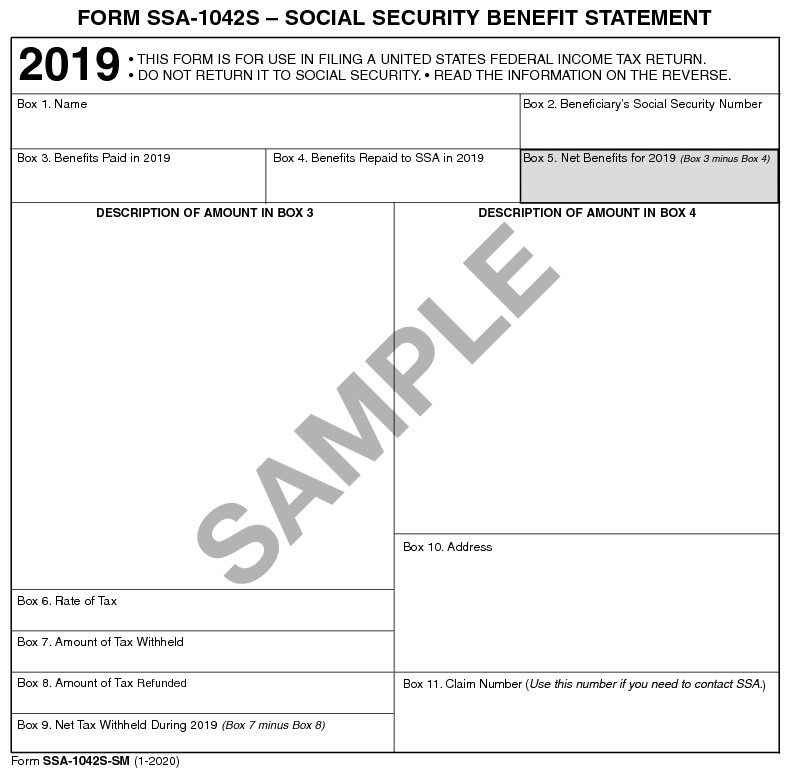 This is the companion to the SSA-1099, but it is sent by Social Security to nonresident alien who receives benefits. In these cases, the amount of earnings on SSA-1042-S is even more important, to you and the Internal Revenue Service.

As a nonresident alien, 85 percent of your benefits are taxed at a 30 percent rate, unless they are exempt or are subject, because of a tax treaty, to a lower rate.