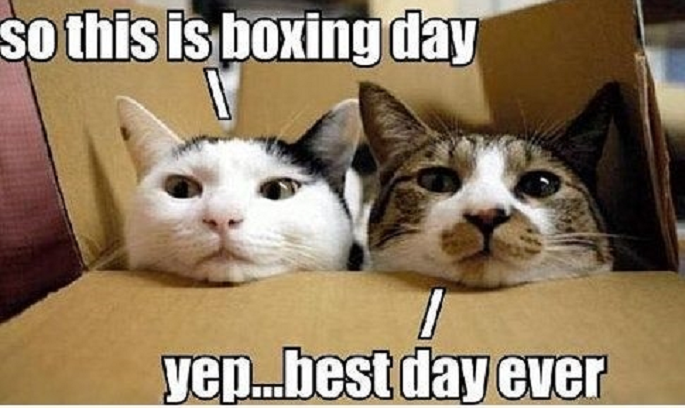 Happy Day After Christmas, or as it's known in many parts of the world, Boxing Day.

As a lover of cats, be they large (like these in an earlier Tumbling Taxes item), small or domesticated (as much as cats can be), I certainly understand the feline interpretation of Boxing Day.

But I also appreciate the other ways, taxes included, to celebrate Boxing Day.

Boxing Day's evolution: Boxing Day got its name in the 1800s when Queen Victoria was on the throne. Since then, it's been celebrated in Great Britain and many of its former colonies, notably Canada, Australia and New Zealand.

One widely circulated accepted origin story is that when Boxing Day began centuries ago, the household servants of that time were given the day after Christmas off as an acknowledgement of the work they had done preparing the estate owners' holiday celebrations.

Another Boxing Day narrative is that it commemorates St. Stephen, who's honored on Dec. 26.

St. Stephen was the first Christian martyr and is celebrated for giving money to the poor. That's led the Boxing Day theory that the day originated in his honor because Dec. 26 was the day on which churches opened their alms boxes and gave the proceeds to the poor.

Origin stories aside, Boxing Day has become an official holiday in many parts of the world. Because of that, when Dec. 26 falls on a Saturday, the so-called bank holiday celebration moves to the following Monday. If Boxing Day is on a Sunday, it is officially observed on the following Tuesday.

And you thought we Americans were the only crazy calendar shifting holiday celebrants with our three-day weekend Monday federal holidays!

Giving on Dec. 26 and beyond: But regardless of the official dates, I love the interpretation that Boxing Day extends the annual giving spirit after all the boxes under millions of trees are opened.

If you want to join in some Boxing Day (or beyond) giving, especially to those who might not have had as joyful a holiday, especially in this COVID-19 pandemic year that was dampened for many facing health, family and financial troubles, your donations will be heartedly welcomed.

And if you make those gifts to Internal Revenue Service-qualified charities by Dec. 31, you might be able to claim a tax filing season gift for yourself: a tax deduction.

So on this Boxing Day 2020 Saturday Shout Out, I'm giving the ol' blog a nod and highlighting some of my earlier tax break donation posts:

Many ways to give, carefully: Remember, you can donate money, either by writing a check or making your gift via a credit or debit card. Or give things, such as the old clothes you no longer need because you got new ones yesterday, or other household goods. Or volunteer.

If you've done well this year and find while rebalancing your investment holdings that some appreciated assets no long fit your long-term plans, you can give those to your favorite charity.

And while there was no required minimum distribution (RMD) for older retirement savers this year, if you're at least 70.5 years old, you still can directly transfer up to $100,000 of your tax-deferred account to an IRS-OK'ed nonprofit.

Remember, just do so by the end of the tax year. That's next Thursday, New Year's Eve, Dec. 31.

But be careful. Be sure to check out the link listed above about checking out charities. It's important not only from a tax standpoint, but for your personal financial safety.

Each year when the charitable giving season arrives, so do related identity theft scams.

And getting back at tax time: As many of the posts listed earlier note, the tax break for donating to charity is most beneficial for taxpayers who still itemize.

But there's also a tax deduction directly on Form 1040 (in the bulleted list) for filers who claim the standard deduction on their 2020 taxes, and maybe in 2021, too, if Donald J. Trump shifts gears and decided to sign the coronavirus relief bill awaiting his signature.

Don't feel guilty about taking the tax break if you donate. We know that most folks tend to give because they want to, not because Uncle Sam rewards them at filing time.

And if you want to give on this Boxing Day but are unsure about which nonprofit to choose, I know some cool cats — and (more Saturday Shout Outs) groups like Charity Watch, GiveWell, GuideStar by Candid and Charity Navigator — that can suggest some worthwhile animal related charities for your consideration.

The groups include ways to help animals. That's something that gets lots of purrs and thanks from all box-loving kitties. 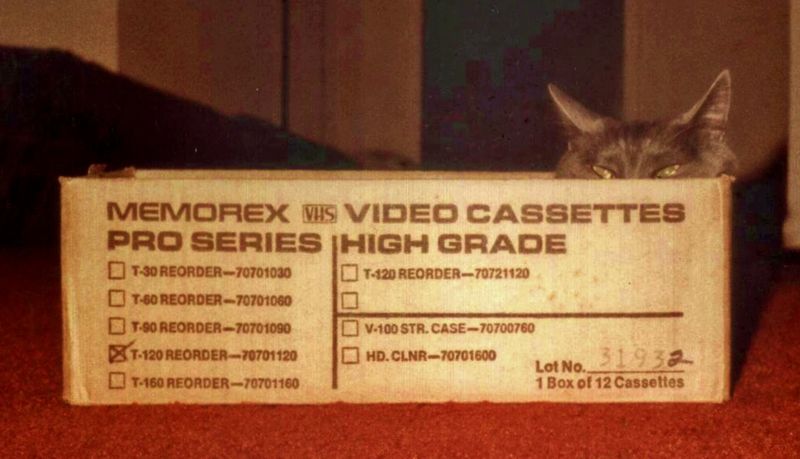 You also can find some bonus cats in boxes at my tumblr blog Tumbling Taxes.