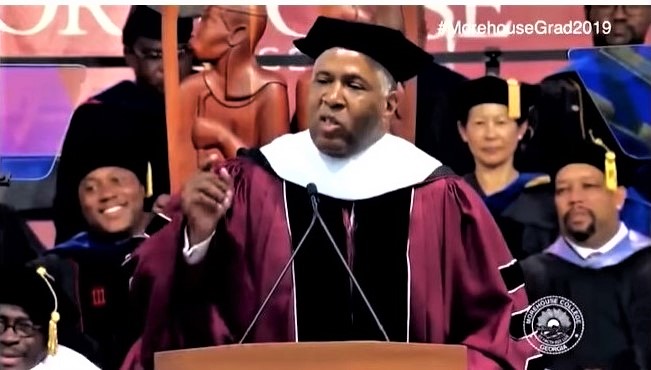 Robert Smith surprised the 2019 class of Morehouse College graduates with a pledge to pay off their student loans. Watch the happy moment via Bloomberg Quick Take on YouTube.

It was one of last year's best feel-good stories. On May 19, 2019, billionaire entrepreneur and philanthropist Robert F. Smith promised graduates of Morehouse College listening to his commencement address that he would pay off their college debt.

The approximately 400 grads at the historically black college in Atlanta were stunned. Then delighted. And the country cheered Smith's benevolence and commitment to making at least a little bit of the United States a better place.

How things have changed in the year and a half since then.

Yesterday, Oct. 15, 2020, Smith entered into a non-prosecution agreement in connection with what federal law enforcement officials say was a 15-year illegal scheme in which Smith concealed more than $200 million in income and evaded taxes by using offshore trusts and bank accounts.

Smith, founder, chairman and Chief Executive Officer of the San Francisco-based private equity investment firm Vista Equity Partners, admitted his involvement from 2000 through 2015 in the arrangement that allowed him to shelter income, according to the announcement by investigators with the Department of Justice and Internal Revenue Service's Criminal Investigation division.

Tax scheme repayment amounts: In addition to admitting his involvement, prosecutors say Smith, who lives in Austin, Texas, will cooperate with ongoing investigations and to pay back taxes and penalties in full. That tax repayment is estimated at around $139 million owed the U.S. Treasury.

Approximately $56 million of that total is from taxes and penalties associated with Smith's unreported income. Another $82 million or so is from penalties stemming from his concealment of his offshore bank accounts, along with penalties.

Additionally, note officials, Smith is abandoning his protective claims for federal tax refunds totaling approximately $182 million. The protective refund claims that were filed with the IRS consisted, in part, of claims filed for charitable contribution deductions on Sept. 21, 2018, and Oct. 11, 2019. Smith shall take no further direct or indirect tax benefit from such claims, according to officials.

As for other investigations, Smith's case is connected to that of another Texas billionaire, Robert Brockman. Brockman also was charged on Thursday with hiding $2 billion in income from the IRS, in what is described as the biggest tax fraud case in U.S. history.

Multiple offshore accounts involved: The offshore holdings created as part of the scheme, according to court documents, were established in Belize in Central America and the Caribbean island of Nevis.

Foreign bank accounts in the British Virgin Islands (BVI) and Switzerland were used to conceal the transactions from the IRS and the Treasury Department.

The financial finagling led to Smith not reporting more than $200 million of partnership income to the IRS. In addition, Smith also failed to report his ownership of his foreign bank accounts as required by U.S. law.

Untaxed money, personal properties: So what happened to the hidden money? Investigators say Smith used millions of this unreported income over the years in question to acquire and make improvements to real estate used for his personal benefit.

Smith admitted such, confirming that in 2005 he used approximately $2.5 million in untaxed funds to purchase and renovate a vacation home in Sonoma, California. In 2010, he confirmed using more untaxed money buy two ski properties and a piece of commercial property in France.

And in 2011 and 2012, Smith acknowledged using around $13 million of untaxed funds to build and make improvement to a residence in Colorado and to fund charitable activities at the property.

Doing the right thing(s): While Smith deserves recriminations for his criminal tax actions, at least he did some good with regard to the Morehouse grads. It's pure supposition by the hopeful part of me, but maybe the memory of the good he did for those students caused him to work out the deal with the feds.

Or maybe, whispers the more cynical side of me in my other ear, federal investigators just had the goods on Smith and he had no other choice.

Whatever the reasons, federal officials are deservedly celebrating their success and encouraging others to follow Smith's admission example.