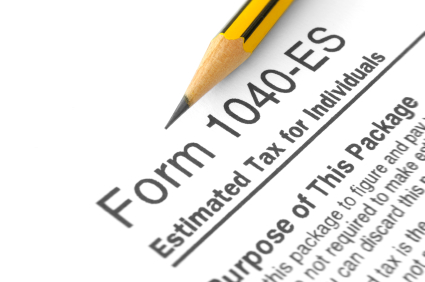 If you get money that's not subject to income tax withholding, then this weekend's Saturday Shout Out posts are for you.

Tuesday, Sept. 15* is the due date for the third quarter payment of estimated taxes.

Our tax system is pay-as-you-earn. That's typically done by withholding from wages. But when there's no per-paycheck tax collection mechanism in place, the payment responsibility falls on the person getting the money. And the way it's done is through estimate tax payments.

When you expect you'll owe $1,000 or more at filing time, you should make estimated tax payments to avoid possible penalties and interest for not, as noted earlier, paying on time, which is quarterly in the estimated tax world.

Third of four payments: The Internal Revenue Service prefers you figure how much money you'll get in the tax year that isn't subject to withholding, figure the tax bill that will generate, then pay it in four equal installments.

While they're referred to as quarterly, you'll not from the table below that the IRS uses its own calendar.

*If the 15th is on weekend or federal holiday, the estimated payment is due the next business day.
In 2020, the 1st and 2nd quarter payments were due on July 15.

The equal payment method also tends to be easier for estimated tax owing filers, too. But you do have different estimated tax payment options.

The basic estimated tax system and an alternate payment calculation system are discussed in four of this weekend's Saturday Shout Outs. They are, shameless plug alert, some of my prior estimated tax posts:

Tax man tidbits, too: So that today's Shout Out isn't totally self-serving, I'm also suggesting a couple of IRS items.

The federal tax collector issued an estimated tax Sept. 15 deadline reminder. It includes plenty of official IRS links if you want even more information on figuring and paying estimated taxes.

Finally, you might want to check out the IRS' video on the subject.

Delayed 1040-ES deadlines: Remember that * earlier in this post? Here's why the asterisk was there. Some folks get extra time this year to file their third quarter estimated taxes.

But the reasons for the grace periods are unwelcome. They've got things other than taxes on their minds because they live in federally declared disaster areas.

That's the unfortunate case for taxpayers dealing with California wildfires and the Iowa derecho. They have until Dec. 15 to make their third estimated tax payment.

A similar delay has been granted those who were in Hurricane Laura's path. Their third quarter estimate tax filing isn't due until Dec. 31.