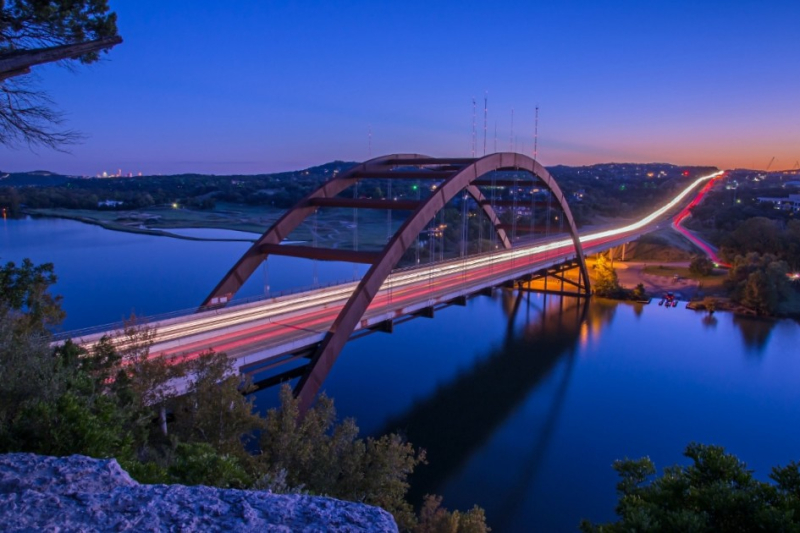 The vehicle lights coming and going across Pennybacker Bridge in northwest Austin are lovely in the evening, but the image also illustrates, as photographer Manuel Garza (via Flickr) notes, "the traffic sucks."

I can't speak for all the country's suburbs, but I know mine is pretty sure that our neighborhood will still be around after the coming presidential election even if Joe Biden does move into the White House.

We are, however, a bit concerned about how our continuing life here outside Austin's downtown might be affected by a proposed real estate tax increase that also will be on our Nov. 3 ballot.

City officials are asking all Austinites to approve the tax hike as a way to pay for increased public transit options. The project's total price tag is $7.1 billion. Voters will decide whether higher property taxes will fund $3.85 billion of that amount.

Terrible traffic, but Texas love cars: Despite the Austin area's horrid traffic, voters have not always been receptive to large-scale transportation projects. In 2014, a $1 billion bond proposal to expand the city's light rail system was voted down by a nearly 14 percent margin.

Some argue the opposition is Texans' independent streak and love of being in control while behind the wheel. Others say it's simply a long-standing Lone Star State dislike of taxes.

Proponents of this latest proposal, dubbed Project Connect, have to convince many of the same voters that rejected the 2014 plan that this bigger transportation measure (and tax) is now worthwhile. They point to congestion in the Texas capital city that is getting worse as it attracts new businesses and residents.

COVID-19 tax vote complications: While Austin's transportation project has been in the works for a while, its election timing is problematic.

Many folks heading to the polls in Texas, and across the United States, have taken financial hits due to the coronavirus pandemic.

Renters facing eviction due to COVID-19 job losses have rightly received a lot of attention. But many homeowners also are having trouble paying their mortgages.

Where they've been able to keep their homes, they're not thrilled with the prospect of paying more property taxes on it, regardless of where the money will go. Project Connect would cost the typical Austin homeowner an additional $332 in taxes next year if the measure is approved.

Texas school tax rates hikes, too: Austin is not alone in asking taxpayers for more money during this economic downturn.

The districts' ballot questions are required under a property tax increase law that took effect on Jan. 1. Local taxing entities now must get voter OK for any property tax hike of more than 3.5 percent.

Elsewhere in the U.S.: Property taxes tend to top the list of most-hated taxes. That's why there continues to be grumbling among homeowners about the federal cap on the deductibility of state and local taxes (SALT).

Property taxes are tied to housing values, so it's no surprise that the actual dollar amounts homeowners pay are higher in places where homes sell for more.

That's why the Tax Foundation recently took another look at property taxes, this time focusing on states' effective tax rates on owner-occupied housing. The analysis came up with the average amount of residential property taxes actually paid, expressed as a percentage of home value.

The Washington, D.C.-based tax think tank found that New Jersey has the highest effective rate on owner-occupied property at 2.21 percent. The Garden State was followed closely by Illinois at 2.05 percent and New Hampshire at 2.03 percent.

Hawaii is at the other end of the spectrum with the lowest effective rate of 0.30 percent. Coming in close behind the Aloha State were Alabama at 0.40 percent, Louisiana at 0.52 percent and Wyoming at 0.55 percent.

The Tax Foundation map below lets you look at how your state compares. Are your property tax rates holding steady? Or are officials also seeking more money from real estate owners in your county, school district and/or state?