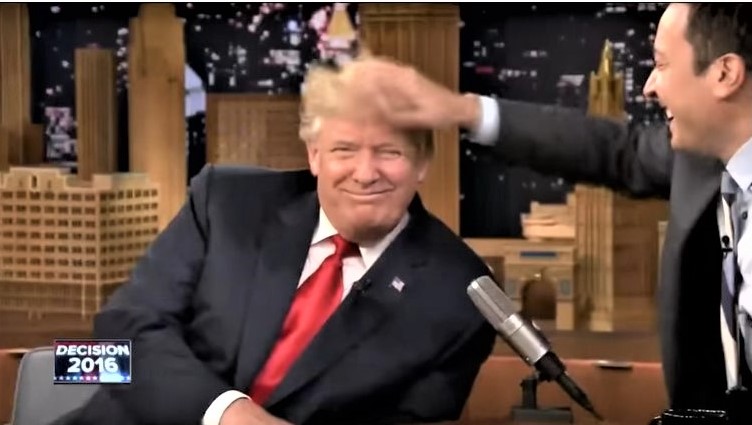 Yes, I — and you and everybody — is talking about that $70,000 tax deduction claim by Donald J. Trump on his taxes, which were obtained by The New York Times and detailed in an expansive story this past weekend.

Trump's hair has long been a point of curiosity and comedy. He knows it. He even has played it up with voters and on non-Apprentice television appearances.

I get it. Sometimes we're all blinded by vanity and wishful thinking and just pure stubbornness when it comes to how we look. In the end, what we think looks good, regardless of reality or realty TV show, tends to win.

So Trump has continued his commitment to his comb-forward quasi pompadour.

And that's fine on a personal level.

On a business and tax level, however, it might not be OK.

Mr. Trump has written off as business expenses costs — including fuel and meals — associated with his aircraft, used to shuttle him among his various homes and properties. Likewise the cost of haircuts, including the more than $70,000 paid to style his hair during “The Apprentice.” Together, nine Trump entities have written off at least $95,464 paid to a favorite hair and makeup artist of Ivanka Trump.

But the story also points out that for such claims to be allowed by the Internal Revenue Service, they must be ordinary and necessary.

Two-pronged requirements: Ordinary and necessary for tax purposes is, like many items in the tax code, is a somewhat subjective area.

What Section 162 of the Internal Revenue Code does say is that a business expense must meet both parts. Specifically, note the "and."

A claimed cost must be both ordinary and necessary. Not one or the other. Both.

After that precise instruction, we get into semantics. That means the IRS gets to play a tax-inclined Merriam-Webster.

An ordinary business expense, says the IRS, is one that is common and accepted in your trade or business. This means that what may be deductible for one business may not be allowed as a deduction for another.

As for a necessary expense, that's one that is helpful and appropriate for your trade or business. An expense does not have to be indispensable to be considered necessary.

Clear? OK. Not so much. Let's look a little closer and see if we get a firmer tax deduction idea.

What's your work? As a writer focusing on taxes and personal finances, I can make a decent argument that my subscription to The Wall Street Journal, a publication that focuses on businesses, taxes and the politics that affect them, is a necessary and common one.

Lots of other financial journalists also subscribe to stay up to date on what's happening in these areas we cover.

However, I and my fellow financial writers probably couldn't convince the IRS that a subscription to People magazine is ordinary and necessary, regardless of how many times we wrote or blogged about the money and tax troubles of celebrities.

As this example illustrates, what's ordinary and necessary varies from profession to profession.

In many situations, it's pretty clear-cut as to what's ordinary and necessary to operate a business. Other times, not so apparent.

That's why you need to able to show the IRS, with appropriate substantiation, why your write-off is legitimate. Remember, the burden of proving a deduction is proper is on you.

Be honest, be appropriate, be ready to explain: As with most tax situations, you want to use your common sense in making any deduction claim.

And as with all tax situations, you want to be honest.

If you know you're trying to put one over on the tax man, then don't be surprised when an IRS examiner calls you on it. They've seen a lot of crazy claims, including probably your questionable deduction, over the years.

Basically, you (and the IRS) just need to use common sense when it comes to work-related expense claims.

No laughing tax matter: You also might want to rely on the laugh test. As you enter the item on your tax return, can you do so without laughing about the absurdity of your claim?

Robert Lee Henry, an accountant, deducted his yacht expenses, contending that because the boat flew a pennant with the numbers "1040," it brought him professional recognition and clients. The matter ended up before the Tax Court.

The court ruled that the yacht wasn't a normal business expense for a tax professional, and so it wasn't ordinary or necessary." In short, the yacht expense was personal and thus nondeductible. (Henry v. Internal Revenue Commissioner, 36 TC 879 (1961))

Henry's creative tax relief attempt got him laughed out of court without his write-off.

Declaring your deductions: When you as a sole proprietor do have a legitimate business expense to claim, you'll do so on Schedule C. This piece of tax paperwork was featured earlier this year on Tax Form Tuesday.

Back on Feb. 25, we looked at deducting business meals & other expenses on Schedule C.

Today Schedule C is getting a second look and mention on this Tax Form Tuesday with a focus on where to claim your ordinary and necessary business expenses.

They are entered, for the most part, on two Schedule C sections: Part II, Expenses and Part V, Other Expenses.

Part II, Expenses, shown below, and its instructions (or your tax software or tax pro) pretty much walk you through what to claim here. 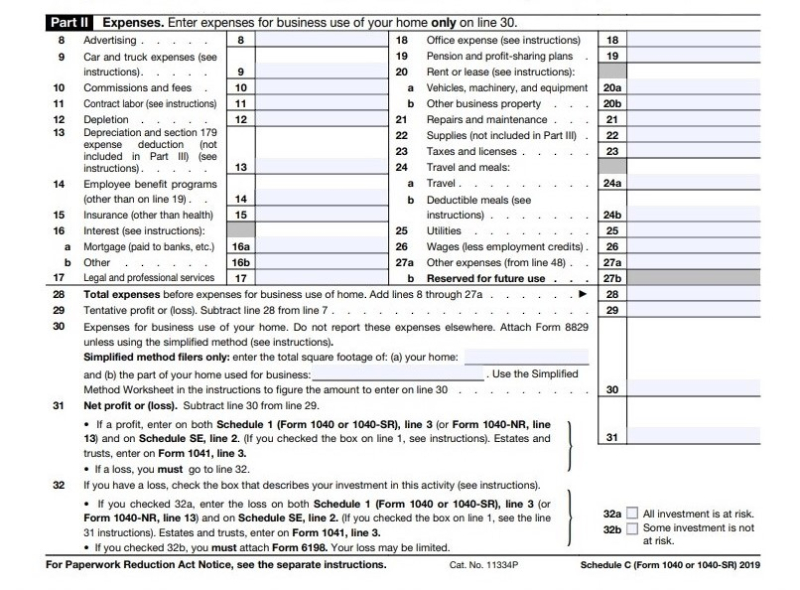 This includes such things as advertising, auto costs, supplies, legal fees, repairs and maintenance, depreciation and Section 179 expenses, and office expenses, which aren't to be confused (although it's easy to do so) with home office costs. Those are addressed separately on line 30 of Schedule C section.

There also are the previously mentioned meal expenses, along with travel costs. If your small business is a bit bigger, you also claim here or wages you paid to employees, as well as folks you hired to help you conduct your business, such as bookkeepers, receptionists and salespeople.

There's also a line to claim amounts you put into pension and profit-sharing plans to keep your employees happy.

Part V, Other Expenses, pictured below, is the last section of Schedule C. It's a catch-all area for any other ordinary and necessary business expenses that didn't fit in the form's previous lines.

This generally includes professional organization membership dues, business publication subscriptions (like the WSJ in my earlier example) and business gifts to clients.

The IRS notes, however, there are some items that you can't count here. Do not include the cost of business equipment or furniture or replacements or permanent improvements to property. It's also a hard no in this section on personal, living and family expenses.

You can find more on allowable and disallowed business expenses in IRS Publication 535.

But it's up to you to determine and convince the IRS — and, if that first decision goes against you, a Tax Court judge, which isn't always easy either — of exactly what's ordinary and necessary for your line of work.