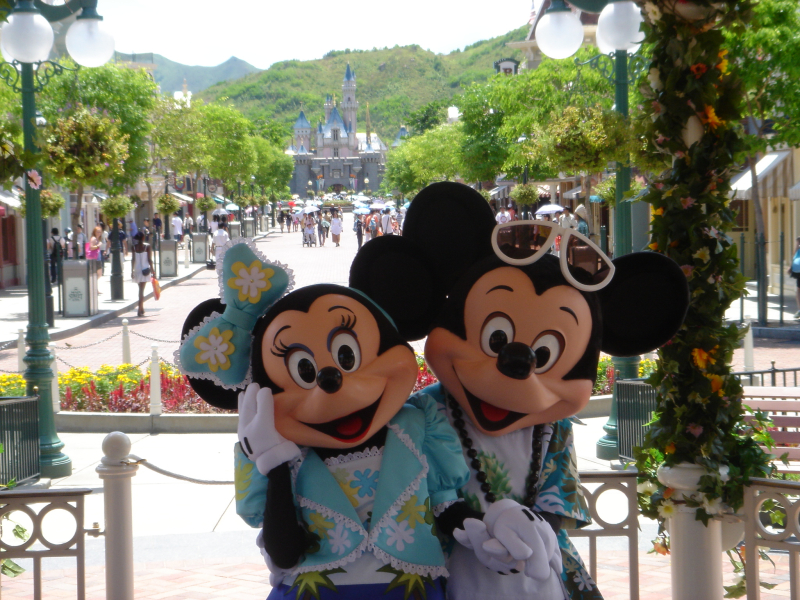 Tax offices often are derided for being Mickey Mouse operations. Rhode Island's Office of the General Treasurer actually went there.

Rhode Island's Department of Revenue said the entertainment industry signatures, which went where state treasurer Seth Magaziner and state controller Peter Keenan should have signed, were due to a technical glitch.

This should have been just a test: The Walt and Mickey signatures were used as part of a test to check out how the images would look on the printed paper documents. They are used on dummy checks printed internally.

A malfunction, however, meant that the faux signatures made it onto checks delivered to a small group of taxpayers.

Everyone errs: I get it. I regularly create rough drafts with nonsensical text as placeholders for to-be-inserted updates. Occasionally, that gobbledygook doesn't get replaced before publication.

In the end, the damage from the mistaken Rhode Island tax payments was minimal.

Sure, Rhode Island had to spend more money to reissue the checks, but there were only 176 of them.

And yes, recipients of the checks, who primarily were Rhode Island business owners who overpaid corporate or sales taxes or who were due tax credit refunds, had to wait a bit longer for their legitimate payments. But they got, or will soon get, their money.

Plus, they have a collector's item. 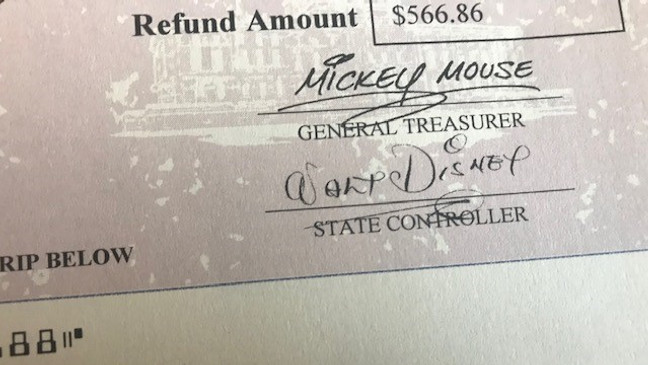 The state voided the checks after they were mistakenly mailed out, so they are no longer of any financial value.

If I had received one, I would have immediately taken it to a frame shop so I could display the fake payment from the House of Mouse founder and his most famous creation.

A few more questions: I admit it, I'm a big Disney fan. I've gone to both Disneyland and Disney World. The latter is my favorite of the two theme parks. I have Disney paraphernalia, mostly from those park visits.

I'm also a Disney+ subscriber, for the company's older animated classics (I still cry along with the Seven Dwarfs when they think Snow White is dead) as well as its newer creations (thanks Pixar, and yes I cry watching Toy Story and Coco). Plus, "National Treasure." C'mon, you, too, totally buy Nic Cage (of tax debt as well as movie fame) as a U.S. history guru.

I am not alone, as the megacorp's earnings prove. So I've always wondered how Mickey Mouse, arguably Walt's most beloved character, became a pejorative descriptor meaning, per Urban Dictionary, something that is "substandard, poorly executed or organized. Amateurish." 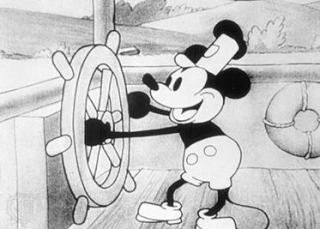 Discussions on Quora, Stack Exchange and the audio item A Way With Words offer some explanations. The one I like, from Stack Exchange's English Language & Usage thread, says:

The phrase isn't referring to The Walt Disney Company itself, but the misadventures and simplistic mindset of the original Mickey Mouse character for which the company is famous.

I can see that in that original character, dubbed Steamboat Willie and pictured above, before he morphed into the ubiquitous Mickey. But today's Mickey is the leader of his character tribe, on film and in the global parks, and is no longer so unsophisticated, so maybe the phrase should be "a Forrest Gump operation."

And here's my final question: How can Mickey, with just those three fat fingers and a thumb, have better handwriting than I?!