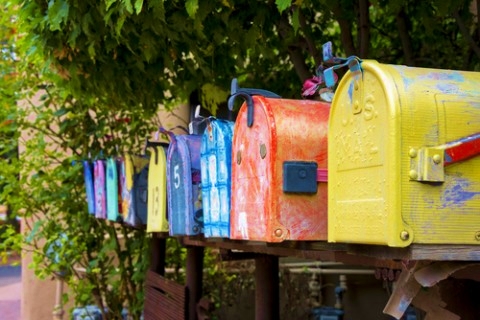 The U.S. Postal Service (USPS) has become a flash point in the coming election.

On Capitol Hill, the constitutionally decreed national delivery service has been at the center of it's become a battle highlighting Republican claims of mail-in voter fraud (largely unsubstantiated) and Democratic concerns about Postal Service funding (not enough) and slowing down of services (too much).

The mail also is a practical issue for the Internal Revenue Service and taxpayers.

Despite increasing efforts to shift to digital tax transactions, the federal tax agency still relies on old fashioned snail mail for many of its tasks and those that it asks (or demands) taxpayers to do in response.

Unfortunately, way too many of those documents every year get bounced back to the IRS because the address to which it was sent was wrong.

Now the IRS is taking steps to change that.

An agency-wide memo went out on July 28 with guidance for IRS employees who process undeliverable mail. It details, pending final formal regs, how they should research and update a taxpayer's mailing address when correspondence is returned by the Postal Service as undeliverable.

Stacks and stacks of mail: The enormity of mail the IRS still deals with was apparent in the backlog of written correspondence created when COVID-19 precautions prompted the IRS to close most of its facilities for several months earlier this year.

When IRS personnel started returning to offices in June, the waiting letter count was more than 10 million.

Most of those literally millions of pieces of paper were from taxpayers who had sent the material to the agency via the USPS.

And, of course, there still were items in those stacks that were from the IRS but returned to sender because they had a wrong taxpayer address.

Long-standing issue: In many instances, these letters come back to the IRS with a USPS yellow label that provides a more current address for the taxpayer. But even with that updated info, a couple of IRS watchdog examinations indicated that the returns weren't handled adequately.

The first Treasury Inspector General for Tax Administration (TIGTA) returned mail examination was in 2010. TIGTA revisited the issue in a follow-up report released in September 2019.

Apparently, things didn't improve that much in the near decade between the TIGTA examinations.

"The IRS mails more than 200 million notices and letters each year to individual and business taxpayers and their representatives. When the IRS does not maintain current taxpayer addresses, it wastes postage and labor processing undeliverable mail," noted the 2019 TIGTA report titled Additional Actions Are Needed to Further Reduce Undeliverable Mail."

The report cited fiscal year 2018 data showing that more than 14 million pieces of undeliverable mail were returned to the IRS at an estimated cost of $43 million.

First, the agency continued in some instances to send out notices to known wrong addresses.

Second, TIGTA also found that some correspondence returned by the USPS with an updated address was destroyed by the IRS without updating taxpayers' accounts.

Taxpayer problems, too: On top of the lost federal revenue, TIGTA examiners noted that the undeliverable mail and the way it is handled by the IRS also produces problems for taxpayers.

"Taxpayers will also experience a burden when they do not receive IRS correspondence, which could result in erroneous balance due notices, collection activity, and delayed refunds," noted the report.

The harm in missing out on a refund is evident.

More costly than that missed money, though, is the missed opportunities for taxpayers to respond to issues the IRS has with their filings. If notices are ignored, whatever the reason, those IRS deemed tax liabilities balloon into more costly unpaid, overdue tax debts.

Yellow label alerts: Despite the crush of coronavirus-related responsibilities, both in administering new pandemic-prompted tax laws and dealing with mail and other backlogs due to safety precautions, the IRS decided to go forward with the returned mail fix.

As noted, the focus is those IRS mailings that are returned with a yellow undeliverable label slapped across the envelope's front that includes a forwarding address for the relocated taxpayer.

We've all dealt with the various incarnations of these mechanically printed USPS labels. They tend to show up during the holidays when our cards come back to us, letting us know that our friends and family moved without telling us.

We also see them on mailings that are forwarded to us when we move. Those yellow labels have our new address. But those only arrive at our new snail mail boxes for a limited time.

And when it comes to IRS mailings, the USPS generally returns those official documents to the tax agency instead of forwarding them.

Filing Form 8822: That's why the IRS continually urges us to send it Form 8822, Change of Address, so as we move. It doesn't matter what time of year it is.

Fill out Form 8822, which is this week's Tax Form Tuesday featured document, and send it to the IRS ASAP. 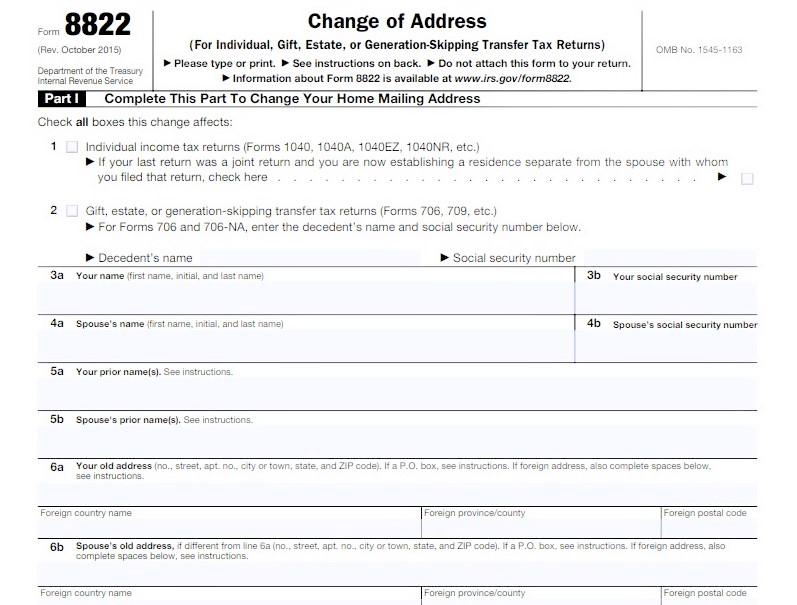 The IRS has more on the process at its webpage Address Changes. Click on the > to expand the information.

It's also a good ideal to let you state tax department know, too.

Form 8822 also is critical because tax law generally doesn't allow the agency to use the new info on the returned labels, even when it comes from a companion federal office like the Postal Service.

Instead, the IRS can only change taxpayer addresses in agency records when it gets clear and concise notification, aka Form 8822.

Procedure change: The IRS memo lays out the process and timetable by which tax mailings are returned, notably those with a yellow label showing the taxpayer's new address and the reason for non-delivery.

Since this label often provides the most current address that the Postal Service has for the taxpayer based on change-of-address requests, the IRS now says that its employees may change a taxpayer address using that USPS label information.

That address info, notes the memo, is from the National Change of Address (NCOA) database and, absent a direct notification from taxpayers, either via Form 8822 or a change made on an official tax filing, the yellow label data now can serve as the taxpayer's last known address for IRS purposes.

The memo then lists five steps IRS employees should take to "examine, research, and update" the address when they receive "any undelivered mail piece with an affixed USPS yellow label."

These guidelines went into effect with the memo's issuance last month. They will be officially incorporated into the appropriate Internal Revenue Manual sections within one year from the July 28 date of the memo.

Where are you? Not to diminish the seriousness and importance of the IRS having correct taxpayer data, but I've got to point out something in the step #5 reference to the agency's Locator Services System, that made me smile.

Once IRS employees make it to this step, the memo says they should use Address Research (LSS-ADR) to issue Letter 2797, Undeliverable Mail System Update, to obtain the taxpayer's current mailing address.

That update system, notes the memo, is known within the IRS as "R U There?"

Despite the amusing moniker, you can save both the IRS and yourself time and potential snail mail trouble by sending the agency Form 8822 as soon as you move.