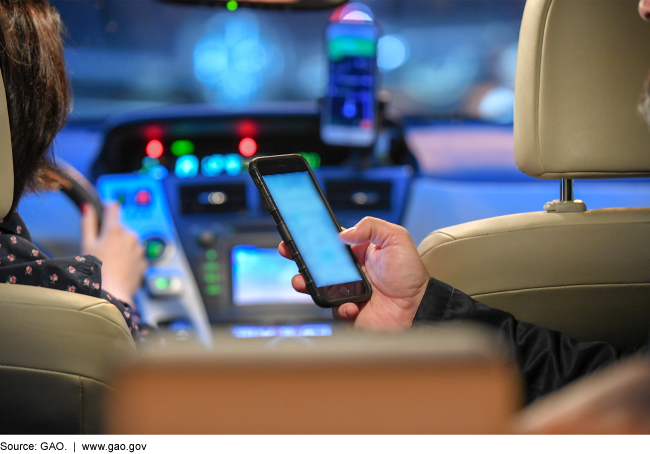 Times are tough for Uber and Lyft operations in California.

Both ride-hailing services are threatening to temporarily shut down in the wake of a Golden State law that took effect in January and, more notably, a recent San Francisco Superior Court order that the companies classify their drivers as employees instead of contractors.

This battle between the popular transportation option and California officials is playing out as the Internal Revenue Service continues its efforts to educate gig workers about their tax responsibilities.

A recent Government Accountability Office (GAO) report has some ideas on how to make sure more freelance workers know or and comply with their required tax tasks.

Here's a look at gig employment, the government watchdog's suggestions (7 in all) to improve tax payment on that money and why the IRS isn't that thrilled about some of the GAO ideas.

Growing taxpayer group: The GAO says there could be up to 2 million of so-called platform workers. This subset of gig economy workers offers goods or services — for example, transportation, retail or short-term lodging — by connecting to customers through a mobile app or other online platform.

"Unfortunately, platform workers may not realize that a company is treating them as independent contractors rather than employees, and as such, these workers have different tax requirements," writes James R. McTigue in a recent post on WatchBlog, the GAO's blog.

Further complicating tax matters, notes McTigue, are the platform companies that only transfer funds between buyers and sellers. They may have reduced reporting requirements.

This means, according the GAO report highlighted in McTigue's post, that platform workers may not get needed tax information on their earnings. That in turn makes it difficult for them to comply with their filing requirements. It also

The GAO graphic below illustrates how workers in the same job might have different tax responsibilities under a platform economy vs. a traditional employer. 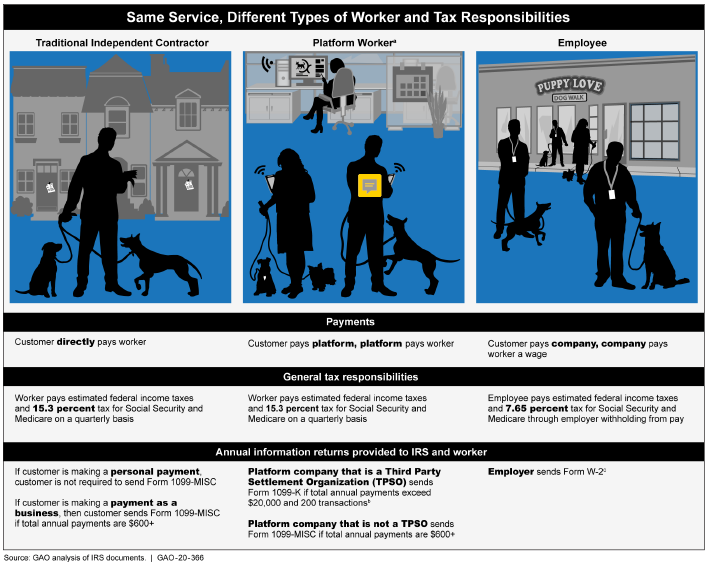 aFor this figure, we use the term platform worker for workers whom the platform company is classifying as independent contractors.
bOnly payments to platform workers who are treated as independent contractors and who are paid through a Third-Party Settlement Organization's (TPSO) payment network are subject to Form 1099-K reporting. Form 1099-K reporting is not required when TPSOs pay independent contractors and employees directly rather than through the TPSO's payment network. Platform companies that classify workers as employees have the same responsibilities as other employers.
cEmployer sends W-2 to the Social Security Administration, which then sends the data to IRS.

Going beyond tax communications: In its taxpayer compliance report "More Income Reporting Needed for Taxpayers Working Through Online Platforms," the GAO noted that the IRS has developed a communications plan, notably its online Gig Economy Tax Center, aimed at workers in the platform, or as the IRS calls it the gig economy.

The GAO lauds the IRS for this move. However, the government watchdog agency says the IRS plan doesn't have a monitoring component to ensure that the tax message actually addresses platform workers' challenges.

To help in this area, the GAO identified seven actions that could help improve tax compliance for workers. They are:

The two GAO recommendations that I find most interesting are a voluntary withholding option and the change to forms indicating that a filer's earnings are from gig/platform work.

The IRS, according to the report, rejected both of these suggestions.

The more you know: When it come to the form changes, the agency told GAO that it has no evidence that platform workers pose a greater compliance risk and that the platform worker designation, by itself, would not be a selection factor for compliance actions.

That may well be true, but by asking filers whether any of their income is from gig work, you remind them at actual filing time that they must pay tax on the money.

And the IRS asked just such an income source question this year on Schedule 1.

At the top of that form that millions used to report earnings other than salaries, there was the yes/no checkbox query, "At any time during 2019, did you receive, sell, send, exchange or otherwise acquire any financial interest in any virtual currency?"

To IRS' point opposing a similar gig earning question, its bitcoin etc. inquiry was posed because the agency says many owners and traders of virtual currency did not realize their tax liabilities and this was an effort to make them comply with the law.

But that cryptocurrency question rationale is the very reason to ask a similar question of filing freelancers. They, too, often do not understand the full tax implications of their app-based gigs or side hustles.

Putting that reminder directly on Form 1040 which all filers will use, rather than a related schedule that they might not realize they need to file, will make gig workers aware they need to include the earning on their returns.

Some tax now, rather than more later: As for voluntary withholding, I'm an independent contractor and am well aware how important full payments are to cash flow.

But cash flow can be disrupted even more when you have to come up with a chunk of money four times a year for estimated tax payments. Or worse, an even larger amount at filing time when you didn't pay enough via 1040-ES filings.

A lot of gig workers probably wouldn't use voluntary withholding. But for those who would, it could be beneficial for them and the IRS. And similar voluntary withholding options are available to recipients of taxable Social Security and unemployment benefits. It seems worth expanding to gig payments.

The IRS, however, opposed this proposal, telling GAO that its role is to administer tax law rather than propose tax policy changes. Also, the IRS says it cannot commit to an implementation date for publishing guidance on a voluntary withholding program due to higher priorities.

I get it. Lots on the IRS plate, especially with the coronavirus pandemic disrupting the 2020 filing season and creating additional duties such as issuing COVID-19 economic relief payments.

But, c'mon IRS, at least put it on your future to-do list rather than dismissing the suggestion outright.

As for IRS qualms about getting involved in tax policy, let's go straight to the appropriate Capitol Hill sources.

Members of Congress are always bemoaning the tax gap, the amount of money Uncle Sam is owed but that the IRS isn't able to collect. Federal lawmakers, particularly those on the House Ways and Means and Senate Finance committees should peruse this GAO report and come up with legislative changes to deal with gig economy under reporting.

I'm copying this post and report to my Representative and Senators, as well as the tax-writing committees. Feel free to do the same if you agree with the GAO ideas.