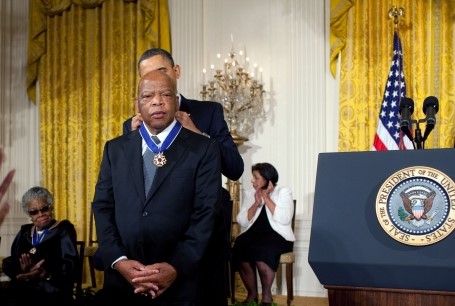 The celebration of the life of the Hon. John Lewis continues. Today, the late civil rights leader and long-time member of Congress lies in state in his native Alabama. Other key moments from his early days in the South also will be commemorated as part of the six-day journey of memorialization and tributes that continues in Washington, D.C., before he goes to his final rest in Atlanta.

America, the world actually, lost a true hero when Lewis passed away on July 17 after his final battle with pancreatic cancer.

As a young man, Lewis started getting into Good Trouble, inspired by and working aside the Rev. Dr. Martin Luther King, Jr. in the fight for civil rights.

Such battles, too often literal, were who he was. And whatever the cause, Lewis was there doing all he could to ensure at least some justice was served.

Tax oversight, too: That also was obvious from his work the U.S. House. In addition to serving his constituents in the greater Atlanta area for 33 years, Lewis also had a tax connection.

He was a longtime leader of the House Ways and Means Oversight Committee, as chair when the Democrats controlled that chamber and then as ranking minority member when the political tides turned. Regardless of his committee title, Lewis stayed on top of problems we taxpayers had with the Internal Revenue Service.

His latest tax accomplishment was as cosponsor and driver of the Taxpayer First Act. This first major reform of the IRS since 1986 became law in mid-2019.

Lewis also worked on legislation to help taxpayers who've had their identities stolen. And he routinely kept the heat on the IRS to stop bogus tax claims that ultimately cost law-abiding taxpayers.

Taxpayer Advocate memories: Lewis' efforts in the tax sphere were reflective of his overall goals of fairness and justice. He was the epitome of doing the right thing for those who needed a champion.

So it's no surprise that the person who, so far, served the longest as the National Taxpayer Advocate also was moved and motivated by Rep. Lewis.

Nina E. Olson, who retired from the internal IRS oversight position in 2019, recently reflected on how Rep. Lewis affected her life and work. Her comments at Procedurally Taxing earn this week's Saturday Shout Out.

I'll let you read Olson's memories of working with the late congressman at your leisure, but I do want to highlight this item from Olson's post about a post-hearing meeting she had with Lewis:

"He took both my hands in his and looked me in the eyes and for the next five minutes or longer just spoke to me, never moving his eyes, talking about those events and the challenges today. The world just stopped for me."

A personal reflection: When the hubby and I moved to Washington, D.C., in 1981, my first job was with Rep. Wyche Fowler, the Congressman who then represented Atlanta.

When Wyche decided in 1986 to run for the U.S. Senate, I remember how proud he was that John Lewis was going to seek the House seat he was vacating. He knew Lewis would win and he knew what an invaluable job Lewis would do for the people of Atlanta and the United States.

My connection with Rep. Lewis was minimal. Being from Texas, not Georgia, I only got to know him in passing from the brief time of transition of the House seat. But I remember how Lewis' office was always one we counted on for moral and legislative support even after Wyche's office moved across Capitol Hill.

I also remember when, after I had long left Washington, D.C., and returned to my native Texas, I continued to be impressed by the actions and commitment of John Lewis. And I called his office a few years ago from my home here just to tell him and his staff that.

John Lewis was that person we all were in awe of because of his truth and soul and commitment to the causes that needed the most support, regardless of how difficult opponents made that effort. He made our world stop, as Olson noted, and in the best possible way.

We all are better because of him. And we, as individuals and as a society, will truly miss him.