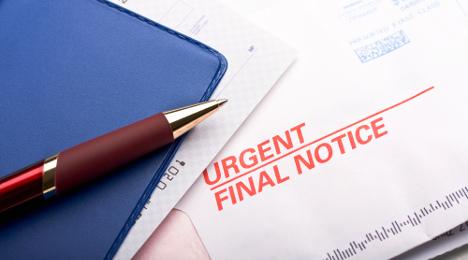 Yes, people should pay their bills. Sometimes, though, things happen. Just look at the financial crises the coronavirus pandemic has created for individuals.

And yes, in some limited cases turning over way past-due bills to a private collection agency is appropriate.

Note the use of the word limited. Full disclosure. For the most part, I hate bill collectors. I've helped family members who were in financial straits deal with them. While things worked out in our favor, those agencies' employees were the total worst.

That's why I was disappointed (yeah, let's use that term to keep the ol' blog family friendly) when Congress forced the Internal Revenue Service to once again employ collection agencies in certain unpaid tax bill cases.

And that's also why I was thrilled to hear about one of those private tax collectors being ordered to pay back at least a little to one improperly targeted taxpayer.

A federal judge recently ruled ConServe, one of the four private collectors that contracts with the IRS, owes a New York man $3,644 to cover his legal fees and the emotional distress he suffered due to its unwarranted collection effort.

Tax owed and discharged: The man, whom I won't name in this post even though his name is in the publicly filed court record, in 2016 had all is personal liability on certain debts discharged by a bankruptcy ruling.

And thus began this legal battle.

Already paid per bankruptcy court: The man went back to the United States Bankruptcy Court, Southern District of New York, this time claiming that all he owed Uncle Sam had been taken care of per the terms of his Chapter 13 bankruptcy.

Specifically, according, to the latest Bankruptcy Court ruling:

The Chapter 13 Standing Trustee's Final Report and Account provides that the IRS' priority claim of $1,291.98 was paid in full by the Debtor's estate; and the IRS' non-priority, unsecured claims were paid their pro-rata share, in the amount of $386.70. ECF No. 39 at 2-3.

However, the man received an IRS notice dated Nov. 6, 2017, informing him that his 2002 tax year debt had been turned over to ConServe. Two days later, the man mailed the IRS a letter explaining the automatic stay per the court ruling.

He also demanded that "[a]ll attempts to collect monies from the debtor must cease immediately."

The IRS ultimately did halt its collection activity on the man's 2002 tax debt on Nov. 22, 2019, according to the court documents. But before then, on Nov. 7, 2018, and Nov. 7, 2019, the IRS collection contractor ConServe sent the man two additional notices seeking payment for the discharged tax bill.

Not how this works: The IRS opposed the man's legal challenge on two points.

First, the federal tax agency argued that the District Court lacked subject matter jurisdiction to hear the tax dispute because the main failed to exhaust his administrative tax remedies. Second, the IRS contended that even if there is sufficient court jurisdiction, the tax debt was not discharged in the man's bankruptcy case.

ConServe filed its own opposition incorporating IRS arguments that the collection agency did not violate the discharge order.

The ruling by the Hon. Cecelia G. Morris, Chief Judge of the Court, provides a solid 23 pages of Internal Revenue Code §s and prior case rulings to support her finding for the prior tax debtor.

However, cutting to the chase in her final determination, Morris found that the man's complaints against the subsequent collection effort were valid. She noted:

At the hearing held before the Court on April 28, 2020, the IRS argued that, even if the tax debt was discharged, the IRS was permitted to collect on the debt as Debtor did not bring an adversary proceeding to discharge these taxes. That is not how the bankruptcy discharge works.

Further, Morris noted, "Debtor does not bear the burden of demonstrating that any of his tax debt meets the exception to be discharged. The IRS bears that burden."

Moral more than monetary relief: On the financial side, the man did not get quite all he sought.

He had asked the court to award compensatory damages, attorney's fees of $2,640 and punitive damages of $10,000 each from the IRS and ConServe.

Morris determined that since the man had not, as the IRS noted, exhausted his administrative remedies, no damages may be awarded against the tax agency.

She also denied his request for $10,000 in punitive damages, from either the IRS or ConServe.

However, Morris found that the criteria had been met to award compensatory damages payable by ConServe.

The breakout, per the ruling, is $500 for each of the two notices issued by the collection agency to pay for the stress and emotional distress he suffered upon learning that a creditor was attempting to collect a discharged debt.

ConServe also was ordered to pay the man's attorneys $2,644 for their services in the case.

Again, not a huge monetary whack to the debt collector, but definitely a victory against the collection agency.

And as the old TV commercial said, that's priceless.