Trump vs. Biden on taxes, a 2020 election preview 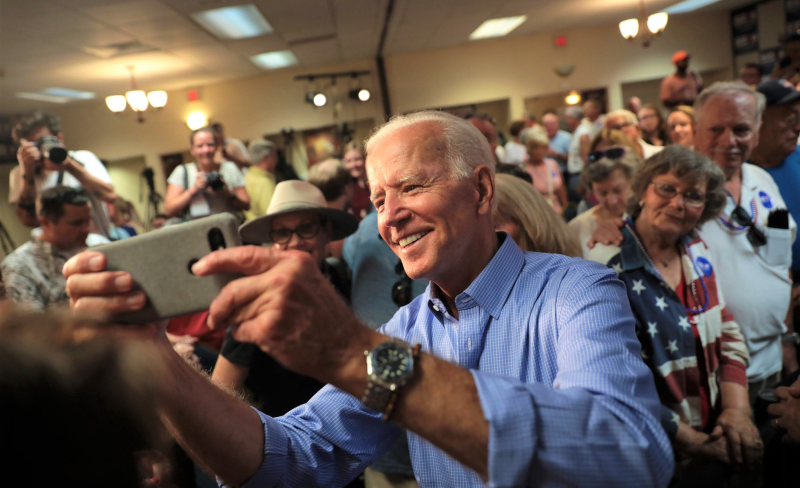 Former Vice President Joe Biden meeting supporters in Iowa last year in the early days of his campaign. Now he's the Democratic presidential nominee. His and opponent Donald Trump's tax plans will be a part of the election discussions. (Photo by Gage Skidmore via Flickr)

It's a done deal. Former Vice President Joe Biden will be the Democrat challenging Donald J. Trump this November for the White House.

Biden secured enough delegates last week to formally become the Democratic nominee on the first ballot at the party's convention. That official imprimatur will come in August at the Democrats' combined in-person and virtual convention in Milwaukee.

The Democrats' decision to scale back their gathering and go partially digital was made to safeguard delegates since the coronavirus is still a health threat.

COVID-19 also has affected the Republican presidential nominating convention, but in a different way.

The GOP still plans to hold an all in-person event and that's forced it to look for a new location. The governor of North Carolina is hesitant to relax COVID-19 precautions for the party's proposed Charlotte gathering.

Campaigning in and on coronavirus: The parties' divergent convention pandemic positions also are playing out in the overall presidential campaign.

Biden and Democrats are stressing their commitment to public safety and additional financial help for those struggling due to the outbreak and subsequent business shutdowns.

Trump and Republicans are pointing to recent state business re-openings and the surprisingly good May employment numbers as validation of their return-to-work approach to the coronavirus.

Expect those opposing political points to be emphasized as Nov. 3 nears.

Also expect to see and hear more from both candidates and their parties on taxes.

This weekend's Saturday Shout Out offers a preview of the GOP and Democratic tax plans.

Specifically, Deloitte, which counts among its multinational services one of the world's largest accounting groups, has published an overview of how the 2020 presidential candidates propose to tax affluent individuals.

Biden's traditional focus on rich taxpayers: The broadest tax take is that Biden is campaigning on the premise that the income tax system needs to be retooled to ensure that high net worth individuals pay more than they currently do under the GOP's 2017 tax reform bill.

However, rather than calling for a wealth tax on affluent individuals based on their net worth, Biden is taking a more traditional approach to redistributing the tax burden. He wants higher taxes on both wage and capital gain income and a higher federal tax on estates left by the wealthy.

Trump's call to expand tax reform's cuts: Trump has not officially issued an official tax policy proposal as part of his reelection campaign. But based on the budgets his White House has submitted to Congress since the enactment in late December 2017 of the Tax Cuts and Jobs Act (TCJA), he and his fellow Republicans want to make permanent that tax reform measure's temporary provisions for individuals, estates and passthrough entities.

Remember, only corporate tax changes are permanent under the TCJA. Other, individual provisions are set to expire at the end of 2025.

Trump also has at various times called for expanding the TCJA via what Republicans call tax reform 2.0. Expect to see GOP specifics by September, when the general election season begins in earnest.

The Deloitte document has more details, as far as they've been published or referred to by the Republican and Democratic candidates, including a handy side-by-side comparison. It breaks down where each stands, right now, on the tax treatment of ordinary income, investment earnings, itemized deductions, carried interest, passthrough income, payroll taxes and the federal estate tax.