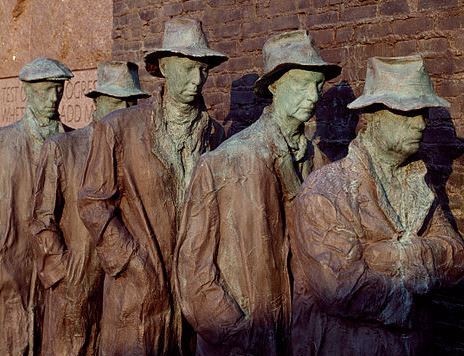 A closeup of the bread line statues that are part of the Franklin Delano Roosevelt memorial in Washington, D.C. (Photo courtesy National Park Service)

Another 5.245 million Americans filed for unemployment benefits in the week ending April 11, according to the Department of Labor's report issued last week.

These latest applications mean that coronavirus ramifications have wiped out more than a decade of U.S. job growth. Since June 2009, more than 20 million new jobs were reported across the United States. But in just the last four weeks, the number of unemployment claims has reached 22 million.

That 22 million mark earns this week's By the Numbers recognition.

Past the peak perhaps: The good news is that some economists believe the number of unemployment claims will steadily begin falling in the coming weeks as COVID-19 cases appear to have plateaued in some of the hardest hit areas.

"The labor market curve is flattening and that's a good thing for the economic outlook as it signifies a recession this time around not a new Great Depression from the 1930s that lasted three and a half years," Rupkey added.

The latest unemployment insurance claims analysis by the Tax Foundation also seems to support that position.

Prior to the coronavirus crisis, the highest one-week unemployment claims as a percentage of everyone in the unemployment insurance system (those currently in "covered" employment plus those claiming benefits) was 1.36 percent in January 1975, note Jared Walczak and Tom VanAntwerp, directors of, respectively, state tax policy and IT at the Tax Foundation.

During the Great Recession, the one-week peak was 0.68 percent in January 2009, according to the duo's latest analysis of unemployment claims. The peak during the current crisis, reached the week ending April 4, was 3.89 percent.

Federal money helps, but not totally: State workforce offices hope that we are indeed heading down the slope of unemployment claims because they are struggling, among other financial concerns, with how to meet unemployment demand.

Federal COVID-19 relief has provided millions in emergency administrative grants to increase states' ability to process unemployment applications and make payments. But for some states, that's just a drop in the bucket.

Many states' unemployment trust funds don't have enough money to cover more than a few months of traditional unemployment benefits for the level of claims experienced during the pandemic. The Tax Foundation illustrates the financial challenge in the map below showing the number of weeks of benefits that every state's trust fund can cover. 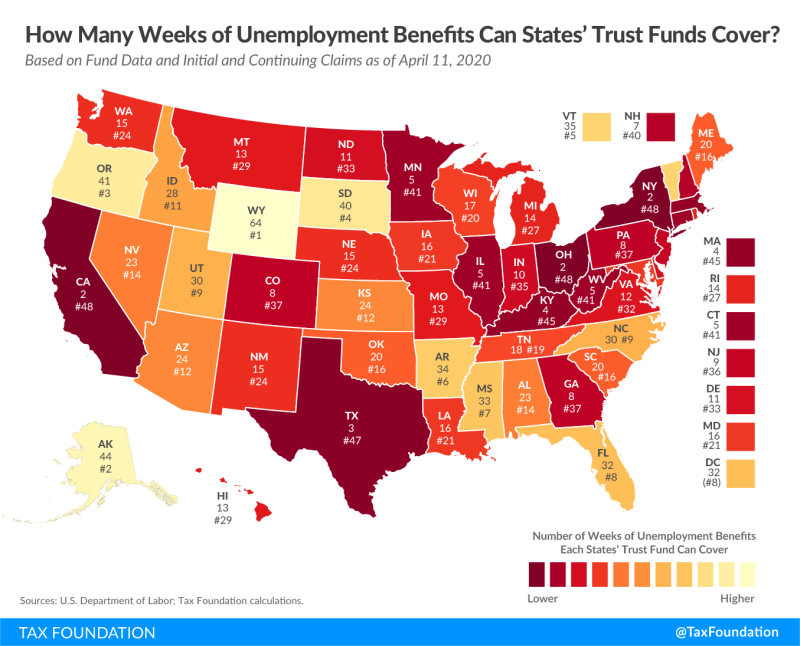 The news is not good her in Texas. Or in California, New York and Ohio. All of these states have just two weeks in the unemployment insurance bank.

The Washington, D.C.-based tax policy nonprofit also has an interactive tool, embedded below, that lets you see how the most recent week's initial unemployment compensation claims in each state ranks compared to average and peak weekly claims during the Great Recession.

BONUS: Check out my tumblr blog Tumbling Taxes' post on this topic, featuring Bing Crosby's rendition of the Great Depression era anthem "Brother, Can You Spare A Dime?"