Estimated tax payment deadlines have changed, but you still have calculation options

The first two estimated tax payments for 2020 aren't due this week because of COVID-19 changes, but it's still time to look at how much you owe via 1040-ES and how best to figure those amounts. I've paid estimated taxes for almost as long as I've filed taxes. These payments, in case this tax is new to you, are the equivalent of withholding.

With estimated taxes, however, we taxpayers must cover the income (and usually other) tax on things like freelance earnings or investment payouts since we get the money without anything being taken out beforehand for Uncle Sam.

There are four estimated tax due dates, shown in the table below.

Wednesday, April 15, is the due date for the first estimated tax amount calculation. And yes, I used the word calculation for a reason.

Delayed payment, but not determination: Folks who've been following the many COVID-19 tax changes know that we don't have to make our first estimated tax payment by April 15. The Internal Revenue Service has decided that we can pay it by July 15, which basically is the new Tax Day this year due to the coronavirus chaos.

Even better, the IRS says we also can delay paying the second estimated tax amount, usually due by June 15, until July 15.

That delay is good for our cash flow, at least here in April. But talk to me in July when two estimated tax payments for a decent first few earnings months of 2020 and any 2019 taxes are due all at once.

That's why on this Tax Form Tuesday (which features the old-school Form 1040-ES voucher. That's the first quarter one shown below; the other three are sprinkled through this post), we're going to look at an estimated tax calculation option that might be worth utilizing this extraordinary tax year.

Four equal payments preferred: The IRS prefers that all of us estimated tax payers come up with a good estimate of our earnings for the year and then send our 1040-ES payments in four equal installments.

That's easy for the IRS to track. It's also generally easier for us, too.

But it's not necessarily a good cash-flow move.

If you're earnings for which you must pay estimated taxes fluctuate during the year, you could owe a 1040-ES amount at a time when you haven't brought in any money.

This could happen, for example, if you run a lawn service. You bring in lots of cash during the spring and summer, but in the fall and winter, clients don't need so much mowing. But you're sending the IRS the same estimated amounts for all quarters, sometimes having to struggle to come up with the tax payment.

Here, instead of making an estimate of your full year's expected income and then dividing that by four, you pay estimated tax for each period based on your actual taxable income for each time frame.

Going back to the lawn service example, let's say for the first quarter of 2020 you brought in just $5,000 as dormant lawns didn't need much tending. That's the amount you'll use to calculate your estimated tax for the quarter ending March 31 and due, usually, by April 15.

Then spring arrives, followed by summer. Everything is blossoming and growing, including your income. For these next two estimated tax payment periods, you pay tax on the $15,000 you made in April and May (due June 15 in normal tax times) and the $25,000 you took in June through August (due Sept. 15).

Then things drop off again. Some landscape winterizations from September through the end of the year brought in just $7,000. The tax on that is paid in your final estimated payment due next Jan. 15.

If you'd used the four equal installment method, you'd have been paying an equal amount of tax on a quarter of your $52,000 income four times. That's tax on $13,000 every estimated tax due date even when you didn't make nearly that much in some quarters. That could put you in a real cash bind trying to come up with your 1040-ES amounts some months.

But by calculating and paying estimated taxes, you're essentially putting your self-employed self into a system that works more along the lines of paycheck income tax withholding. That is, you pay your taxes closer to when you make the money and have it available to cover the tax bill.

Annualizing means more work: While the annualized income installment method means that your year-round cash flow is better, as least as far as taxes are concerned, it does cost you more work.

And you might have to show the IRS your estimated tax calculation work when you do file your annual return by also filling out and submitting — Yay! A bonus Tax Form Tuesday form! — Form 2210, officially titled Underpayment of Estimated Tax by Individuals, Estates, and Trusts. 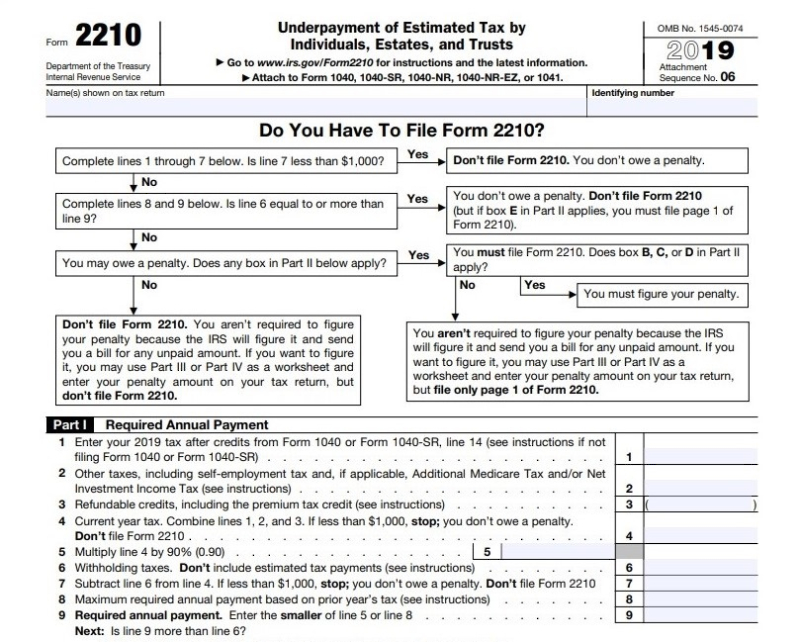 This is because, as noted earlier, the U.S. tax system is pay as you earn. Underpay your total estimated amount or even just the amount due in one quarter, and you could get slapped with a penalty and interest.

Generally, if you do not make at least a minimum payment for a certain estimated tax payment period, you will owe a penalty. Yes, the penalty is figured separately for each installment due date, meaning you could owe a penalty for an earlier due date even if you paid enough tax later to make up the underpayment and end up getting a refund.

Remember, it's pay as you earn, including for estimated taxes.

Figuring each quarter: Form 2210 also comes in handy when, for example, you don't have any estimated tax income during first payment. When you suddenly show up making estimated taxes later in the year, the IRS tends to presume that you should have been paying all along.

You can use Form 2210 to show your annualized income installment method payments and file it with your tax return even if no penalty is owed. 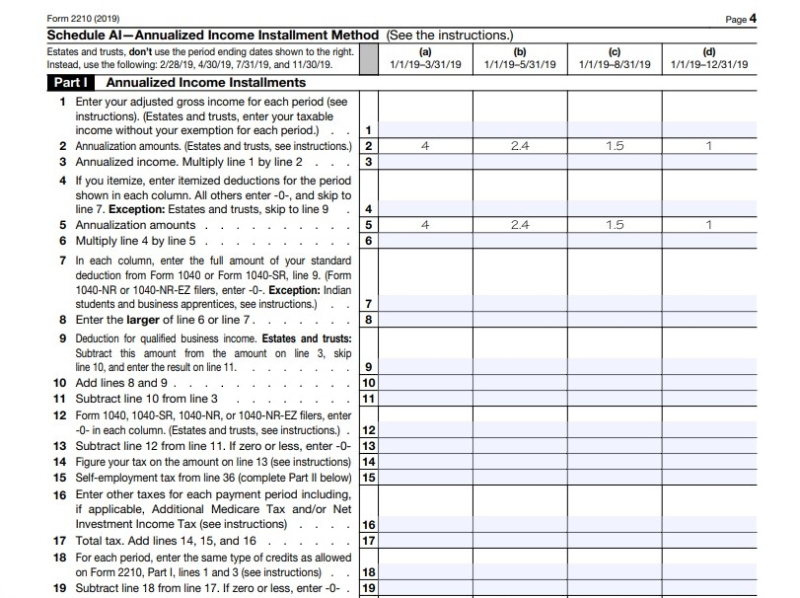 By showing your estimated tax work on Form 2210, you'll let the IRS know that you did indeed pay the uneven, but appropriate, tax amounts four times based on your fluctuating earnings.

Yes, Form 2210 is a pain. Aren't you glad you have a tax professional or at least use software?

But for folks with uneven earnings, using the annualized income installment method of paying estimated taxes and subsequent added filing is usually worth it.

Don't miss the deadlines: Likewise, if you must make all four estimated payments and miss one payment period altogether, then you will owe a penalty from the date that payment was due until the date you make it.

So regardless of which method you use, make sure you send in your estimated tax payments, with a 1040-ES voucher if snail mailing or sans the form if you pay electronically, on time.

Even when the deadlines are extended until July 15.