The Senate also addresses this year's tax filing and payment deadline, as well as those for 2020 estimated tax payments, in its coronavirus relief bill. Keep reading for more on this latest change and check out this Q&A for elaboration from the IRS on some specific tax considerations under the new mid-July deadlines. 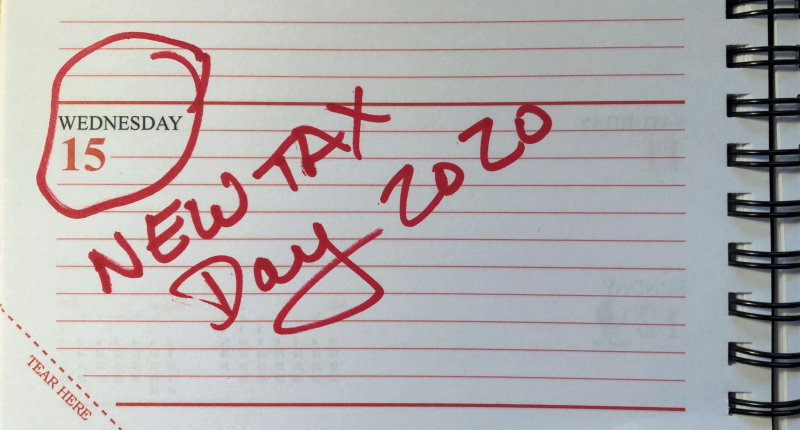 2019 tax year returns and any due payments now will be due on July 15, 2020, according to a Treasury Department announcement this morning. And yes, I drew that sloppy circle and scribbled the info on my own calendar. I should have had a cup of coffee before doing so!

That noise you hear are the hallelujahs being shouted nationwide by tax professionals. They've been clamoring to have the usual April 15 tax-filing deadline delayed since coronavirus precautions have disrupted the tax world along with the wider world.

He announced, via Twitter (of course), that "we are moving Tax Day from April 15 to July 15. All taxpayers and businesses will have this additional time to file and make payments without interest or penalties." 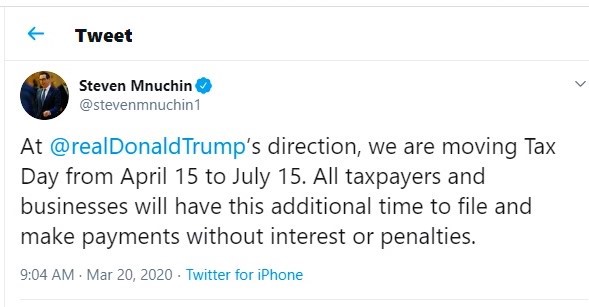 Exactly one minute later, Mnuchin also encouraged all who are able to file (and pay) before then to do so

I encourage all taxpayers who may have tax refunds to file now to get your money.

Tweaking of earlier tax deadline change: The Treasury Department and Internal Revenue Service earlier this week (Wednesday, March 18) issued official word about the prior delay until July 15 of tax payments only.

That date change also covered the first estimated tax payment for 2020 that normally is due on April 15.

But even though they adjusted the payment timetable, Uncle Sam's financial officials left the 2019 tax year Form 1040 filing deadline of April 15 in place.

Tax professionals and their representative associations immediately lambasted Treasury and the IRS for splitting the filing and payment dates.

Such dual deadlines, they argued, would wreak further havoc on a filing season that's already forced everyone, taxpayers and tax preparers alike, to make dramatic changes in their personal, business and tax lives.

Most states that have income taxes use the federal tax filing and payment deadlines, too. That's because those state returns tend to use information from your federal 1040.

So it's likely that state tax officials will follow this IRS move and push back their due date. But check with your state tax department to make sure.

Estimated taxes still not aligned: However, it did not mention any further estimated tax payment action.

Many in the tax world, however, pointed out that would mean that the first estimated payment would come after the second one due by June 15.

Senate would adjust all filing, paying dates: I'm basing my predictions and "later" hedging on the language in the Senate's just-introduced Coronavirus Aid, Relief, and Economic Security Act, or as it's being called the CARES bill. That measure would change various tax filing and payment due dates.

You can read my reading of the CARES deadline changes in this Twitter exchange earlier this morning. Yes, I was up earlier than usual because the ray that is now is messing with my sleep patterns more than usual. I am not alone.

Basically, the Senate looks to be taking the tax pros' suggestions that the filing and payment deadlines for 2019 returns be aligned on July 15. That gives folks three months to get their taxes done and paid without any penalty or interest charges.

The CARES bill also addresses the usual mid-April estimated tax due date, as well as all the other 1040-ES payments for the 2020 tax year and that are due this calendar year, specifically the dates in bold red type below:

Under the Senate proposal, the April, June and September estimated tax payments for the 2020 tax year wouldn't be due until Oct. 15. That's the regular deadline for folks who get an extension to file their annual tax return. CARES says "all such installments shall be treated as one installment due on such date."

More time to come up with money: Mnuchin's proposal and the sort-of concurring Senate bill, which is still in early legislative stages, give taxpayers who owe a 2019 tax bill three months to file that return and pay their taxes. That's good, since many of them are now without jobs thanks to COVID-19 closings and social/physical distancing.

Similarly, the Senate's suggested postponement of 2020 estimated tax payments also would allow filers to keep more of their cash longer. Hopefully, by October things will be better, tax and general life wise.

I'm sure the IRS will be issuing an official notice detailing Mnuchin's Twitter announcement about the new July 15 tax filing and payment deadline. It should, I hope, clear up things and also address the estimated tax deadline(s). Yeah, I know. I'm hoping for a lot, tax and otherwise, nowadays.

Also, keep an eye on the Senate CARES measure. I will, too, and let you know what happens there when it finally happens.

And, at the risk of sounding like a broken record, Meanwhile, hang in there and take care. Your and your families' health is much more important than any tax considerations.

William, the proposed extended extension of Tax Day 2020 is still up in the air. I'll post if and when it's changed ... or not! Thanks for the question and for reading. Kay

Any News on IRS changing DUE DATES TO BE September, 2020?
Thank you
William Hoffman
Public Tax Preparation, Ltd.

Thank you for your post! Do you think this will also affect IRA contribution deadlines? In my own research, was curious if decision makers would follow code around extensions found here: https://www.law.cornell.edu/cfr/text/26/301.7508A-1