Is delaying the April 15 tax deadline a good way to deal with coronavirus? 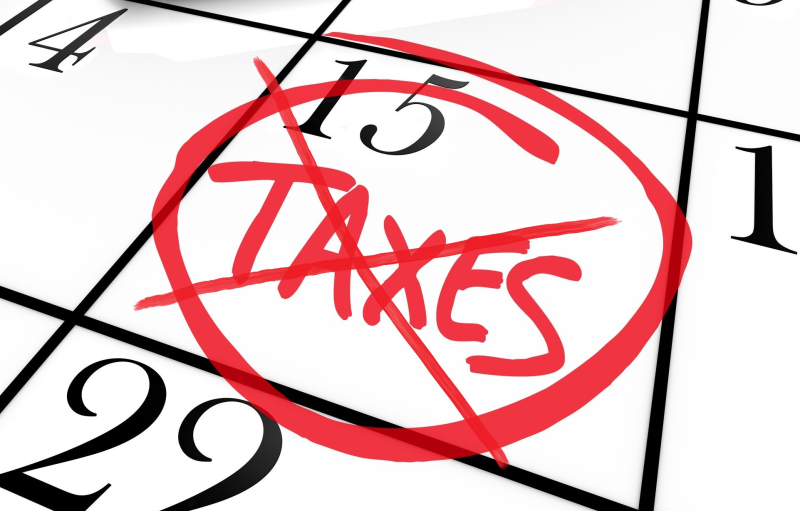 If you're freaking out about the approaching April 15 tax filing deadline, the Internal Revenue Service might have some welcome news for you.

The reason (you guessed it) is the coronavirus that's spreading across the country.

Mass gatherings — social, political and cultural — already have been halted or dramatically limited in many places. Such actions have hit home for me. Here in Austin, we're — well, they, not really we, as I long ago quit going to the thing — in mourning over the cancellation of South by Southwest.

I get it. Avoiding masses of humans is the best way to slow the transmission of COVID-19.

But why delay the tax deadline?

Tax interaction issues: Taxes are personal. That means that for millions, taxes already are basically filed in isolation.

Folks nowadays — more than 30.3 million as of Feb. 28, according to the running IRS filing season count; that's almost 3 percent more than at that time last year — do their returns on their own, from the privacy of their homes, using tax software. Fill out, click send and boom, your 1040 is e-filed without another human anywhere in site.

Filers who get help from tax professionals also have limited interpersonal contact.

Such professional assistance generally is just the tax preparer, the taxpayer (or taxpayers when it's couples filing jointly) and the tax pro's office staff.

That potential personnel tax pro office interaction generally is well below what most public health officials view, for now, as dangerous. (The Centers for Disease Control has no set attendance cap suggestion, but state officials seem to have settled on groups of 250 or less as the cut-off in their warnings.)

IRS tax isolation actions: So why the move, which Treasury Secretary Steven Mnuchin today told a Congressional hearing is all but set?

A couple of reasons.

One is that while millions of us take care of taxes on our own, some do seek help at more public forums, such as Volunteer Income Tax Assistance (VITA) and Tax Counseling for the Elderly (TCE) locations nationwide.

TCE operations are particularly worrisome, as older individuals are more susceptible to the virus.

Then there's the financial impact of the coronavirus.

The Trump Administration sees the postponement of not only filing returns, but paying any due taxes as an economic lifesaver to those who are struggling financially because of the outbreak.

For individuals who've had to miss work and companies that have seen their operations disrupted by the coronavirus, an extension to file and pay essentially would be a short-term loan.

IRS authorization: The idea of tinkering with the April 15 deadline was broached on Tuesday when Democrats on the tax-writing House Ways and Means committee sent a letter on the matter to IRS Commissioner Charles Rettig. 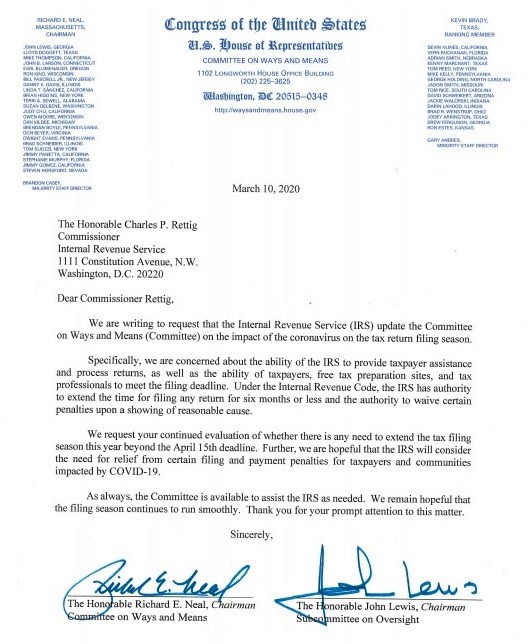 Click image to see letter with all Ways and Means signees.

Now the IRS is seriously looking at the possibility and at just what it can and can't do.

In natural disaster situations, the IRS routinely extends deadlines. That happened most recently in the wake of the March 3rd deadly Tennessee tornadoes. Affected Volunteer State taxpayers have until July 15 to meet upcoming tax deadlines.

In such cases, the federal tax agency also has the ability to waive late filing and payment penalties. It's now reportedly exploring whether it can, without any Congressional action, also abate interest charges in extraordinary circumstances such as a national public health emergency.

Also being debated, both on Capitol Hill and internally within Treasury and the IRS, is whether other tax deadlines, such as the April 15 estimated tax due date and the almost-here March 15 deadline (now March 16 since the 15th is on Sunday) for some business filers also will be affected.

Good, bad or meh: As expected, reaction to the potential Tax Day delay has been mixed.

The National Taxpayers Union Foundation is all for the postponement.

Nicole Kaeding, an economist, NTUF vice president of policy promotion and @NKaeding on Twitter, says there are economic and logistical reasons to support the delay. She suggests a new Tax Day of June 1, with a reassessment at the end of April to determine if that extension is sufficient.

"Additionally, states should follow this lead and delay their own tax filing requirements," writes Kaeding at the NTUF website.

I consulted the collected tax wisdom of social media and here are some of the thoughts of tax professionals on Twitter and Facebook.

Enrolled Agent Phyllis Jo Kubey, aka @PKubeyEA on Twitter, also has some concerns about the interaction of and effect on state and federal filings.

Good, with misgivings. The big question is #IRS relief for payments due on 4/15. How will that be framed & implemented? And also, a major issue is how the states will respond. Many taxpayers file in multiple states. It could be interesting.

Phyllis is much more tactful and polite in her choice of "interesting" that I am!

Brad Garland, a CPE who is Twitter's @TaxPoetic, also is skeptical. "I don't think it would provide any real advantage," he says. "If the IRS falls behind because the DC (and other) offices must work from home, that doesn't impact the submission and payment of taxes, just processing times. If clients need more time, that's literally what an extension is for."

But if the April 15 date is moved, he posits that June 15 would be a good date. It would provide a 60-day window, notes Garland, and aligns with the second quarter estimated tax deadline.

Melinda Nelson, another CPA on Twitter as @MelindaNCPA, is not a fan of continuing tax season, but says that "if 'social distancing' is going to be a thing, guess we all  have to do our part…"

Adam Markowitz, another Enrolled Agent known on Twitter as @adammarkowitzEA, also is not big on pushing back April 15.

"I generally think it's a bad idea to extend the deadline universally," Markowitz says. "Even people who are contained or quarantined can still get documents to their #TaxPros. Sure, there should be exceptions to rules, but the IRS makes exceptions all the time."

And as for tax pros already dealing with what life, clients and taxes throws their way, @cpagirl1 Wendy sums it up with this Tweet:

I’m just wondering how long they would extend it. 2 weeks? Could this make a permanent change to the deadline? We always deal with other viruses during tax season and I’m sure everyone takes precautions.

So what do you think? Would you welcome a delay in the filing deadline? Do you think Treasury and the Administration are overreacting? Is it as much a public relations move as a practical tax consideration? Have you already filed and just don't care?

Let us know in the comments section below.

And as for current comments in this post, you've probably noticed that all the social media reactions were from the #TaxTwitterverse. A lot of the ol' blog's Facebook page followers have seen my request there for input, but so far, no takers. When any relevant comments are posted at that social media platform, I'll add them here.

Great article, Great content with all the helpful information.