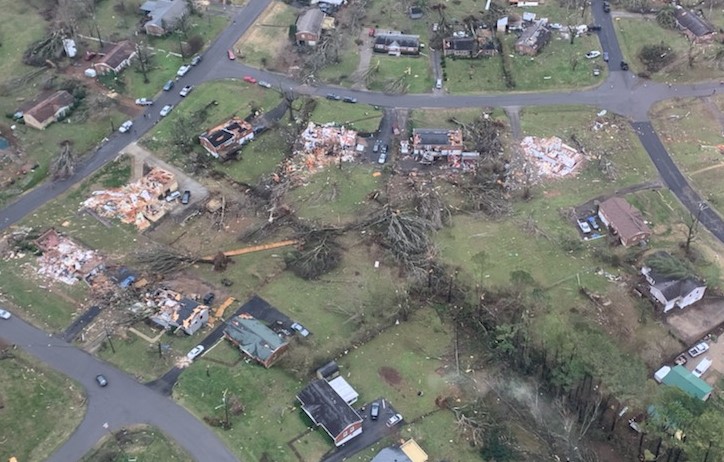 Spring storm season came early and with a vengeance to the southern United States last night. At least 25 people lost their lives when a tornado roared through the Nashville area early today.

Tornado sirens started sounding around 2 a.m. Central Time on March 3. By the time the twister completed its rampage, it had become Tennessee's second-deadliest March tornado. More than 150 were injured. Residents and officials are still assessing property damage.

Volunteer State residents are living their home's motto today, as they not only work through their losses, but also helping out neighbors.

In the coming weeks, those that have insurance will file claims. Those that don't will look to the federal government to see if the tragedy meets levels to be declared a major disaster.

If the White House does issue an official declaration, the Federal Emergency Management Agency (FEMA) will start providing assistance. You can check FEMA 's special webpage where it tracks major disaster declarations.

In addition, that official designation will allow those suffered property damage to get special relief from the Internal Revenue Service and possibly file a tax claim to help cover their losses. The IRS also has a special webpage with its tax actions in connection with disaster declarations.

Major disaster claims only: Under the Tax Cuts and Jobs Act that became law in late 2017, you can no longer claim casualty and theft losses as itemized deductions unless your they resulted from a federally declared disaster. This claim limitation is in effect through 2025.

When a tornado or other natural catastrophe does merit major status, you can your losses on this week's Tax Form Tuesday featured document, Form 4684, Casualties and Thefts. (Yes, the name is the same, although it mostly deals with losses that now apply only to major disasters.)

Personal claims on page 1: For personal losses, you'll focus on page 1 (excerpt shown below), where Section A asks for details on your personal property losses. 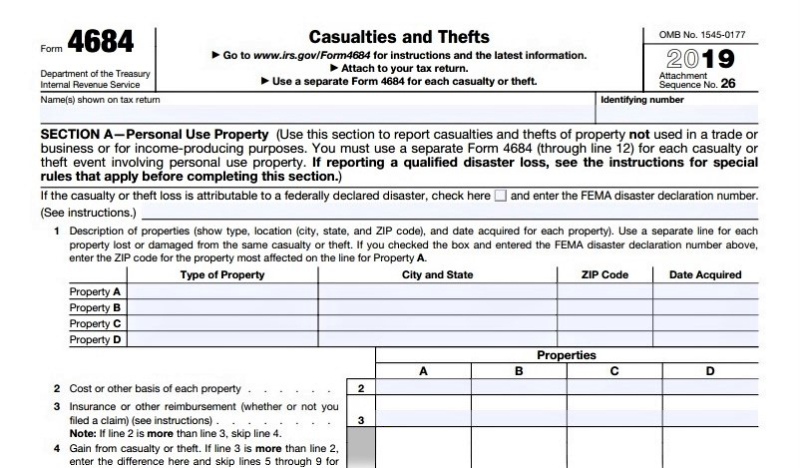 The form provides lines up to disaster claims related to four different properties. If you had more damage, you can attach the additional information.

Note that you'll need to show the value of the property when it was damaged, as well as any insurance reimbursement you may have received.

Also, since only major disaster damage claims are eligible, the form also asks for the FEMA disaster declaration number.

Your income amount comes into play here, too. You must subtract 10 percent of your earnings level from any potential tax claim.

Once you've filled out this form, the results go on your Form 1040 Schedule A with your other itemized deductions.

Section B is for business losses: If your business or other income-producing property sustained losses, that information goes in Section B (excerpt shown below). 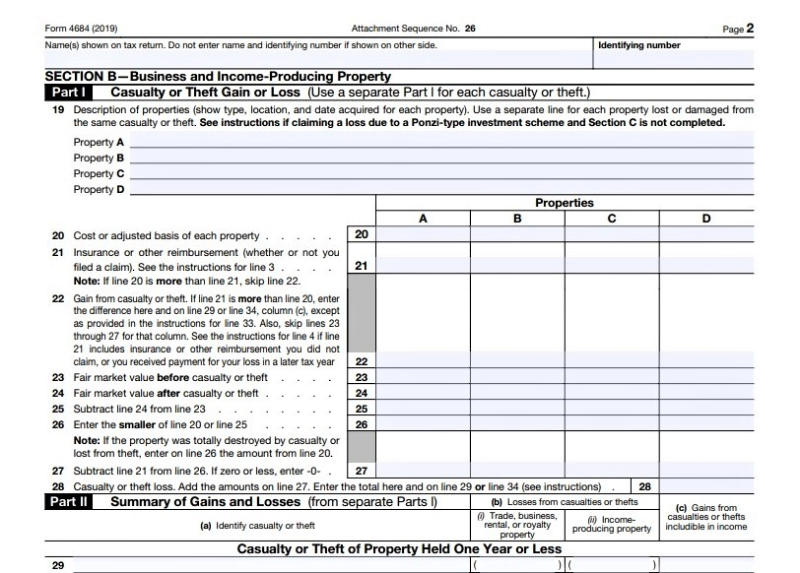 Page 3 is for Ponzi: The form's third page (excerpt shown below) is for loss claims due to a Ponzi scheme. In this type of financial scam, named after Charles Ponzi. He perpetrated a notorious investment scam involving postal reply coupons in the 1920s.

More recently, securities trader Bernard Madoff was convicted of a Ponzi scheme that involved hundreds of investors who lost a combined $65 billion. 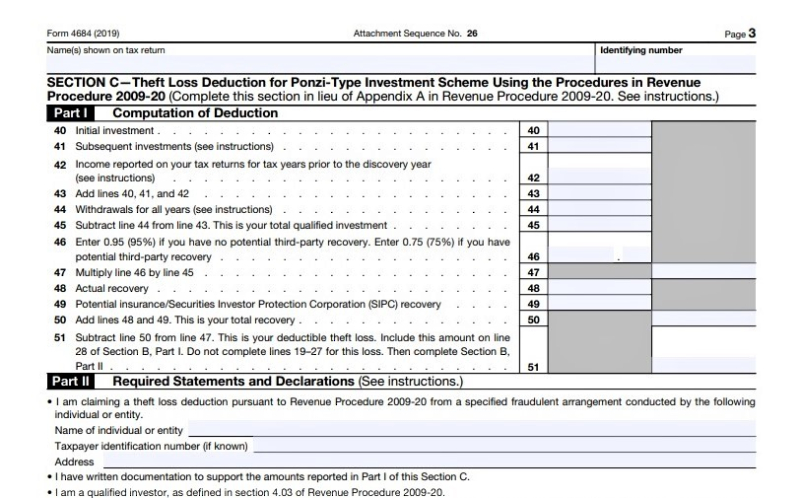 Ponzi scheme investors see such gains at first, which attracts more investors, but the schemer never actually makes any investments or earns any profits. Instead, the "results" that investors receive actually come from their own or other conned investors' money. Such scams eventually fail when the con artist can't convince new investors to join.

Form 4684 instructions have more on who can claim Ponzi scheme losses. If you've fallen prey to this con, you also should consult a tax professional on claiming this tax relief.

Time shifting tax losses: Finally, page 4 of Form 4684 returns to natural disasters claims. This section (shown below), you have the option to claim your current major disaster losses as if they happened in the previous tax year. 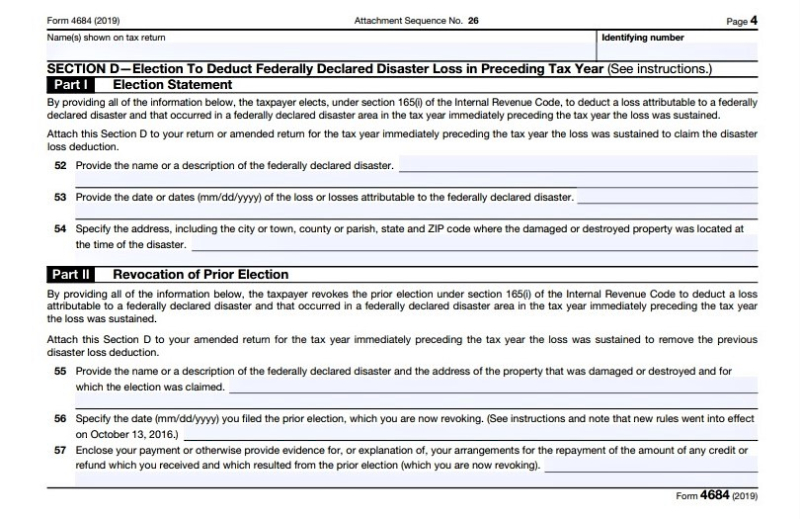 Changing your claim date can be a valuable option when such tax time shifting produces a larger refund or better tax result than if you claimed it for the tax/calendar year in which you actually suffered the losses.

Claim and other disaster details: You can find more on how to determine when to file a qualifying disaster loss claim in my earlier post on how to get tax help for your natural disaster losses.

You also might want to review how your home's basis, not its market value, is key in calculating your disaster loss tax claim.

Those items are just two tax-related of the many disaster posts found in the ol' blog's special collection of storm related posts. These posts, collected on six ever-growing "Storm Warnings" pages, look at, among other things, how to prepare for, recover from and help those dealing with major natural disasters. (This post is going on the recovery page.) 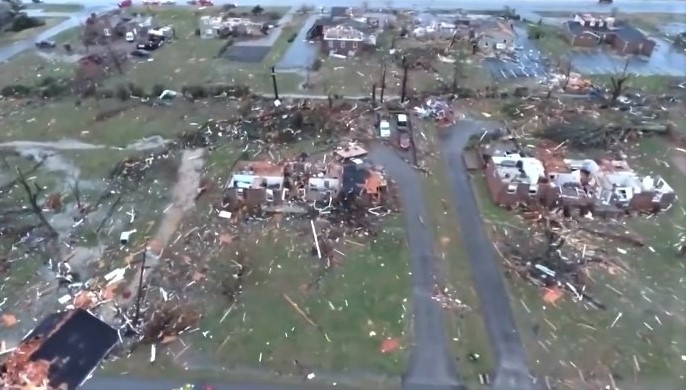 Also note that in major disasters, the federal funding bill enacted in late December 2019 established automatic 60-day tax filing deadline extensions for folks in devastated areas who have things other than taxes on their minds.

If the Tennessee tornado does receive major status, that will give affected taxpayers there more time to file their 2019 tax returns.

Finally, while you can find the following posts on the aforementioned Storm Warnings pages, here are a few that Tennessee readers might find particularly useful.

If you live elsewhere, keep the links handy, too. The spring storm season is fast approaching.