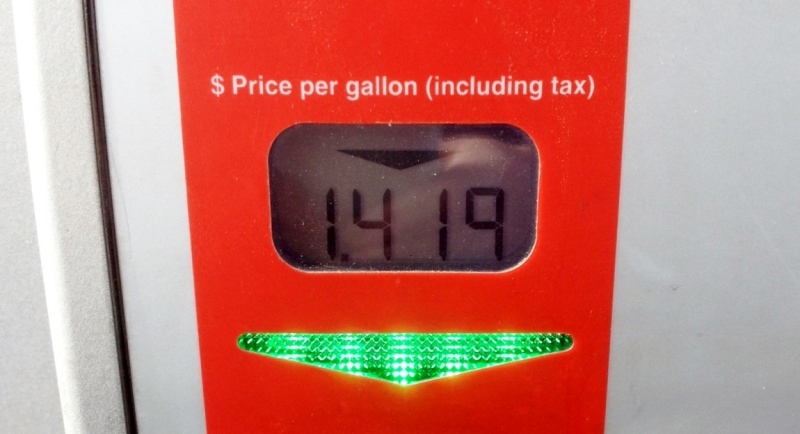 This is what I paid for a gallon of gas four years ago. It's not quite that cheap right now, but fuel prices here and nationwide are heading down again.

Life is full of trade-offs. That includes our tax lives.

If you have money in the stock market, the continued declines of asset values are, at best, disconcerting.

Uncertainty about the coronavirus, both how quickly it's spreading and questions on how to contain it, have been a major factor in the market's losses. But another factor came into play with today's dive.

And this is where one of those inevitable trade-offs comes into play.

Last week, the online fuel price tracking company GasBuddy reported the national average price of a gallon of regular gasoline was $2.41. That's $1.70 less than the highest recorded average of $4.11 set in July 2008.

A gallon of gas costs less than $2 at more than 3,000 gas stations in the United States. The stations in my neighborhood are part of that group. You can get a gallon here for just $1.92. That's not quite the $1.42 shown at the top of the post I paid back in February 2016, but I admit I recently topped off my tank.

The current lower pump prices nationwide are making it easier, or at least less contentious, for some lawmakers to raise their states' fuel taxes.

Here's a look at four states where such tax hikes are at least being discussed.

Virginia: Virginia's General Assembly is nearing completion of a transportation package that would hike gas taxes across the state. The 10-cent increase would be implemented over the next two years. The measure, is backed by Democratic Gov. sad Northam.

After the Old Dominion's fuel tax is fully in place, any increases will be tied to the Consumer Price Index. The additional funds will go into the state's fund that pays for Virginia roads, transit and rail projects.

In exchange for the higher gas prices, Virginia drivers will get a $10 reduction in the state’s vehicle registration fee.

Massachusetts: Further up I-95, however, a transportation bill that includes a gas tax increase might not fare as well.

The Massachusetts House has overwhelmingly approved a ten-year, $18-billion transportation and infrastructure spending bill that raises taxes on gasoline and diesel fuel. The Bay State's gas tax would go from 24 cents per gallon to 29 cents per gallon. Diesel taxes also would increase to 33 cents per gallon.

In addition, the Massachusetts measure calls for increased fees on ridesharing trips offered by companies like Uber and Lyft. (That's happened at city levels elsewhere.) The current 20 cent fee would go to $1.20.

It's fate in the Massachusetts senate, which like the House is controlled by Democrats, is likely, but that chamber has not indicated when it will act on the bill.  Even if the tax hikes are approved by the legislature, Republican Gov. Charlie Baker has said he'd veto the measure.

Kentucky: In Kentucky, the legislative process is just beginning on a possible gas tax hike there.

A bipartisan bill introduced in the Kentucky State House would hike gas taxes by almost nine cents per gallon. It also would add more fees to both electric and gasoline-fueled vehicles in the Bluegrass State.

If approved, Kentucky's gas tax would increase from 26 cents per gallon to 34.6 cents per gallon. As for electric vehicles, as drivers would pay $200 when they register their vehicle and another $200 for the annual renewal of their license plates.

The bill still has a way to go as it was submitted last week on the final day to file bills during the 2020 Kentucky regular session.

Utah: Think you're safe from gas tax hikes because you live west of the Mississippi River? Think again.

If Utah's Republican governor gets his wish, that state's drivers will be paying higher gas taxes.

While the Beehive State is looking at an overall reduction in taxes, Gov. Gary Herbert says the Utah road and general funds are running out of money. The best way to replenish that account, he argues, is with a gas tax increase.

Utah did hike its gas tax a few years ago, but didn't that move didn't fully take into account inflation adjustments for the 20 years before that.

Potential positives: Lawmakers in these states looking at possible fuel tax hikes obviously didn't plan on the recent market turmoil and its effects on gasoline. However, they can use it as short-term cover for the increases.

And regardless of whether you live in a state that's looking to increase gas taxes, if the pump prices stay low, you also might have a personally positive trade-off when the coronavirus finally subsides.

When that happens and if you didn't lose too much investment money, you can treat yourself to a vacation that should cost less thanks to lower fuel costs and companies looking to lure back travelers.