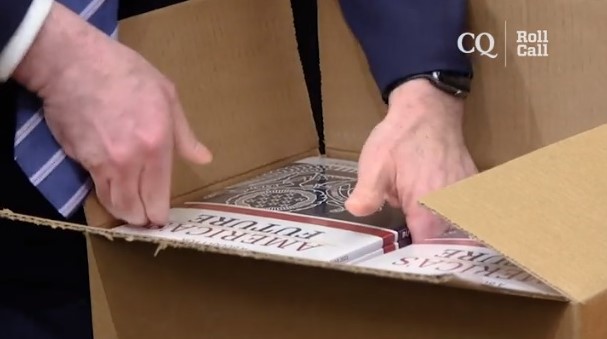 Treasury was one of only five departments or major agencies — the others are Defense, Veterans Affairs, National Aeronautics and Space Administration (NASA) and Homeland Security — that got budget bumps in the Trump Administration's Fiscal Year 2021 budget request. (Screen shot of CQ/Roll Call video of delivery of budget books to Capitol Hill)

The annual presidential wish list, formally known as the administration's fiscal year (FY) budget, is public. Bottom line, and it's a big one, is the FY 2021 proposals top out at $4.8 trillion.

When it comes to this funding exercise, regardless of which president or party initiates it, much of what's in a FY budget proposal won't happen.

That tends to happen, or rather not happen, when a White House doesn't have control of both legislative chambers.

It's particularly true when the White House and U.S. House, where spending measures originate, are led by opposing political parties.

Still, a president's annual budget proposal like the one issued today, is similar to a kid's overly hopeful letter to Santa Claus. It gives us an idea of an administration's priorities.

Expect to see more of the funding ideas in Donald J. Trump re-election ads than in actual spending bills.

No budget surprises: As for those ideas, there's not much new in this latest budget.

It's no surprise that Trump's pet projects, such as the U.S.-Mexico border wall and the military (with a special nod to the new Space Force), get more money.

And while the document acknowledges that the federal deficit be more than $1 trillion, it says that is a short-term problem.

"This year's Budget includes $4.4 trillion in savings — bringing deficits down each year, and putting the Federal Government on a path to a balanced budget in 15 years," according to the budget document.

More on this pledge later.

More money for the tax man: The IRS also gets a bit of good news.

While no Republican administration can ever be expected to be a true friend of the IRS, the Trump White House continues to be at least a nodding acquaintance of the agency.

The Trump administration is boosting slightly funding for the IRS, proposing $12 billion for the agency in fiscal 2021 to go toward its primary functions.

As in its prior budget, the Trump Administration again seeks money for the IRS to continue to deal with its technology-related challenges. This latest budget proposal earmarks $300 million so the IRS can continue information technology (IT) modernization efforts.

The budget also wants Congress to consider legislation that would provide additional funding to expand and strengthen tax enforcement.

Last year's White House budget request was $11.5 billion, which ultimately made it through Congress and into law. That was an increase from the previous $11.3 billion funding level for the federal tax agency.

Overall, the Treasury Department, of which the IRS is part, would get $15.7 billion, also a slight bump over the current funding level.

Why IRS money matters: Most folks aren't fans of the IRS and wouldn't be upset if the agency didn't get a budget boost.

But since most Americans must, at some point in their lives, deal with Uncle Sam's tax collector, it's really in our best interests for the IRS to work properly and efficiently.

Already, according to the IRS, for every $1 dollar in funding it gets, it brings in $4 dollars in new revenue. That's a pretty good return on investment.

If the tax agency can't collect all that money the Treasury is due, we all have to live with the shortfall. That difference, in most cases, will be made up either by us paying more in taxes or living with fewer services.

Enough … for now: The National Treasury Employees Union, which represents about 70,000 IRS workers nationwide, has long argued that decreased IRS funding, as well as associated reductions in staffing and other resources affects the agency's ability to do all its jobs.

The jobs ranges from collecting taxes to auditing those who don't pay to assisting taxpayers trying to do the right tax thing.

IRS Commissioner Chuck Rettig, whom I'm sure would never turn down more money, is, at least publicly, more sanguine about budgets and his agency's ability to do what's required, at least through most of this year's tax filing season.

"The fiscal 2020 budget, which will run through September, will provide us with a $207.5 million increase over last year, taking the agency to $11.5 billion,” Rettig wrote in a memo to IRS employees at the end of 2019, according to Government Executive, which received a copy of the internal communication.

The commissioner did admit, however, that "the IRS will face budget challenges this year," primarily due to personnel (current and retired) costs, as well as other operating expenses. These fiscal concerns would pose "some difficult budget choices in the year ahead," requiring the IRS to "allocate our resources strategically."

Still, Rettig assured employees in the memo that he is confident they can handle the work.

Other budgetary tax matters: OK, the IRS is covered. But what will other tax-related FY 2021 proposals mean to the rest of us?

Fans and makers of electric vehicles aren't happy. The Trump budget eliminates some tax breaks in this area.

And yes, the issue of more oversight of paid tax preparers is still there.

It's not as detailed as previous budget requests, but is cited as the White House's support for "several proposals to ensure that taxpayers comply with their obligations and that tax refunds are only paid to those who are eligible, including: improving oversight of paid tax preparers; giving IRS the authority to correct more errors on tax returns before refunds are issued; requiring a valid Social Security Number for work in order to claim certain tax credits; and increasing wage and information reporting."

Extending individual tax cuts: The biggie, though, involves the tax cuts in the GOP tax reform measure known as the Tax Cuts and Jobs Act (TCJA).

The individual tax breaks are temporary, set to expire at the end of 2025. The business tax breaks, you'll remember, don't have an expiration date.

The Trump Administration wants to extend the TCJA's individual measures for another decade beyond their current expiration date. The cost of keeping them on the books through 2035 will be $1.4 trillion.

Not to worry, though, says the White House.

The cost of the continued TCJA tax breaks, goes the perpetual GOP thinking, will not be a problem because "all administration policies will pay for themselves."

Many folks, including esteemed economists, regular financially-focused folks like me and history, disagree with this assumption. No economy has grown consistently or enough to generate sufficient money to make up the cost of tax cuts.

But expect that debate to continue when Congress does start looking at the president's budget and the federal government's upcoming fiscal year's funding needs.

Yay Chuck! Quietly, without fanfare, he gets more bucks.