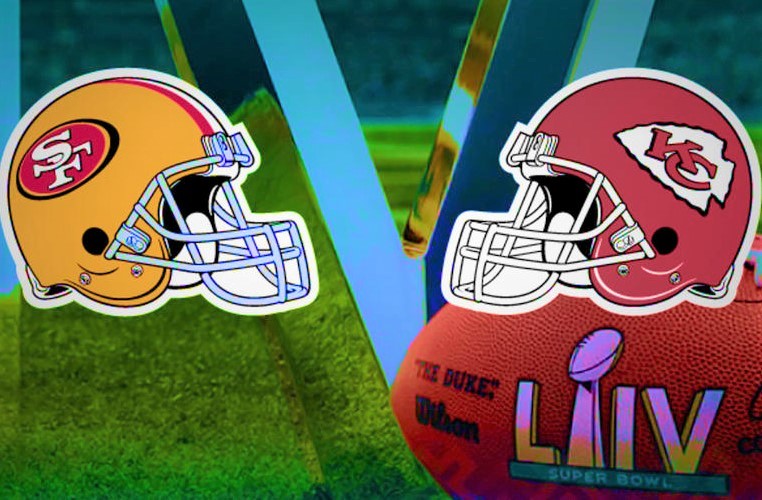 Are you having some trouble getting fired up for Super Bowl LIV?

I feel ya. It's hard when your team isn't one of the competitors. But as a lifelong Dallas Cowboys fan, I've learned over the last 24 years — yes, that's how long it's been since Them Cowboys were in the National Football League championship game — creative ways to pique my interest in the annual match-up.

This year, for example, it's pretty easy to find a reason to watch.

Kansas City Chief's star quarterback Patrick Mahomes is not only a native Texan like the hubby and me, but he also played for our Texas Tech University Red Raiders.

The Kansas City Chiefs, with its star quarterback Patrick Mahomes, is among the handful of teams that National Football League watchers say have a shot at winning Super Bowl LIV next February.

So sorry San Francisco 49ers and all your fans, my cheering money (if not any literal betting dollars) is on the Missouri team.

Player homes and schools: Actually, the birthplaces and college affiliations of members of both the Chiefs and 'Niners covers the United States pretty well.

No, I didn't do the research myself. I'm not that much of a demographic football nut.

But the folks at the U.S. Census Bureau are.

This Super Sunday, according to the Census Bureau, players will represent 33 different states and five countries.

You can get a more specific look at where the players on Chiefs and 49ers were born and played college ball with the Census' nifty interactive map. 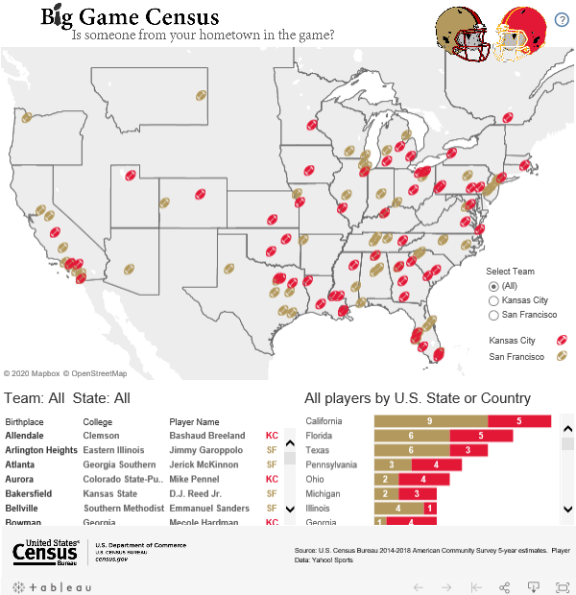 Dubbed The Big Game Census, the online visualization not only takes a closer look at the players' birthplaces, but also provides Census data points for those locales.

You can sort by teams and then dig deeper state-by-state. When you click on the hyperlinks (when available), you'll be redirected to a U.S. Census data site for more information on various geographies. If you find it as confusing as the on-field Xs and Os, just click on the help icon (the circled question mark) in the top right of the map page.

I've spent way too much time playing with the Census Bureau's Super Bowl LIV map since discovering it, so of course it gets a Saturday Shout Out.

Jock and residency tax concerns: Wait. Is that long-time readers of the ol' blog I hear asking, "What's the tax connection?"

As you already know from my prior posts, professional athletes are among the large group of income earners who are subject to jock taxes. These are the levies that states with income taxes and many cities (and other more-local jurisdictions) collect from professional athletes (hence the jock tax moniker) and other entertainers when they make money in those tax jurisdictions.

And don't be fooled by the term jock tax. State and cities apply their collection efforts to anyone who makes money within their borders.

I'm not sure where Mahomes calls home, but if his legal tax residence is in the Lone Star State, he's going to have a great state-tax-free Super Sunday.

Texas has no individual income tax. Neither does Florida, where the NFL biggest game will be played for the 15th time. Feb. 2's kickoff in the Miami-area stadium will be number 11 there. Four other Super Bowls were played in Tampa.

Relocating for taxes isn't simple: Many professional athletes make no-tax states their homes so they can avoid as much state tax as possible. Heck, even Donald J. Trump has decided to forgo New York's high tax rates for full-time state tax-free living at Mar-a-Lago in Palm Beach.

OK, I know he said it was for other reasons, but we all know how important paying as little in tax is to Trump.

The key to taking advantage of another state's lower taxes is to truly establish state residency. If you're just doing so halfheartedly and for obvious tax reasons, you can be sure that state tax officials will contact you.

Weinberg's more recent piece warns relocating taxpayers they should be prepared for a residency audit.

The bottom line as both these tax professionals point out is don't just load your stuff on a truck and think your state tax collector will ignore it. If you are indeed moving primarily for tax purposes, you need to consult with a reputable tax pro before uprooting.