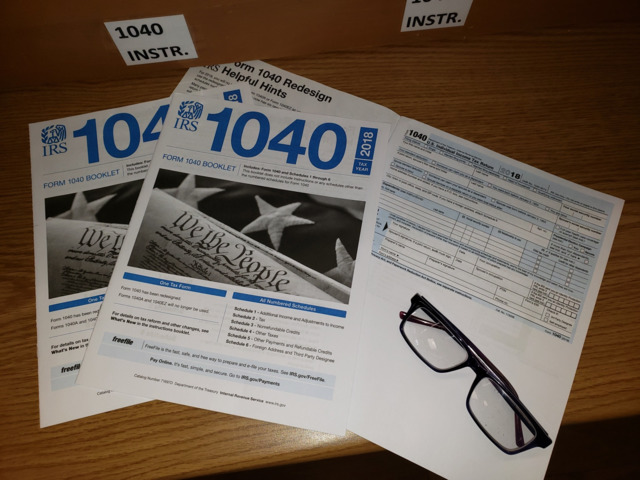 Taxpayers got their first experience with new filing forms with last year's 2018 returns. There are more changes to the 1040 for 2019 taxes, too, but the revisions actually could be helpful.

Tax season is about to start in a less than two weeks. Jan. 27, in case you forgot.

Many of us are already working on our 2019 returns, either by working with a tax preparer or filling out our forms on our own.

Doing taxes has never been a fun job for most folks. But filing under the Tax Cuts and Jobs Act (TCJA) has made that job a bit simpler in one regard.

One form, but six schedules: True, the TCJA wasn't quite able to get the return down to the promised postcard size. The first 1040 under the new tax laws did, however, cut 56 lines from the old long tax return, ending up with 23 lines.

But they still were spread over two pages (front and back).

And to account for the shortening, the info that used to go on the long 1040 was parceled out over six new schedules. Depending on your tax situation, you had to fill in one or all of the new pieces of paper with the lone Form 1040.

Even though tax software or a paid preparer walked taxpayers through the new paperwork, it still didn't go over well.

So the Internal Revenue Service reworked the Form 1040 for the 2019 tax year.

TCJA 1040 take 2: The 1040 now is a bit longer (yeah, that postcard idea definitely is dead). But the idea is that the form should be easier to understand.

The reason for the added length? Some of the info that had been shifted to some of the new schedules now can be found back directly on the 1040.

So this first Tax Form Tuesday, a new feature this year on the ol' blog, looks at the new, and hopefully from a filer's perspective, improved Form 1040 we'll be filing this year.

Back to the 1040 future: The biggest change upon first glance is that the revised 1040 now looks more like the old 1040 that had been in use for decades before the TCJA overhaul that took effect with the filing 2018's taxes.

You still enter your personal information, along with that of your spouse and any dependents, the same as last year and pre-tax reform. 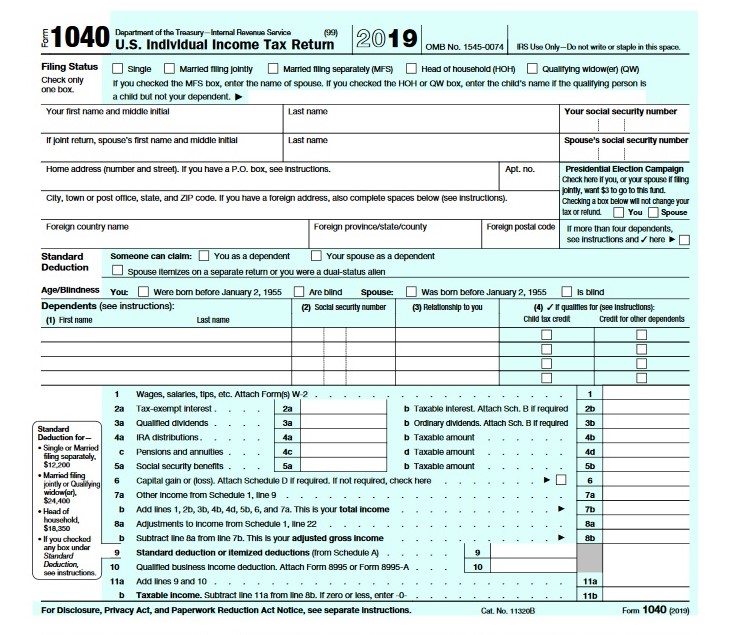 What's new in this top section is any foreign address information. Last year, that data was collected on Schedule 6, which the IRS has discontinued.

In addition, the bottom half of the 2019 Form 1040 now has income information instead of last year's signature blocks, which seemed weird to me as it gave the impression of signing something before filling in the form.

Information that was on the back (page 2) of the 1040 last year now is on the front page, including how much you made from:

The most noticeable thing about this latest 1040, however, is that you get a look at the TCJA's expanded standard deduction amounts on the new first page of the tax return.

And while adjusted gross income still isn't the last line on the first page of the post-TCJA 1040, the 2019 revision does give us an even more important figure as page 1's last entry: our taxable income.

I don't know about you, but with this reworking I feel like at this stage of completing the 1040 I've accomplished something.

But wait, there's more: Page 2 of the form again is reminiscent of earlier 1040s.

The top section of this on 2018 returns lumped together income reporting, your withholding (and other tax payments, like estimated ones), your deduction (standard or itemized) choice and some tax credit claims.

That's still there in the 2019 tax year version, but it's got a cleaner look, thanks in large part to fewer boxes, inserted Swiss cheese style in last year's 1040, awaiting info transfer from other forms and schedules. 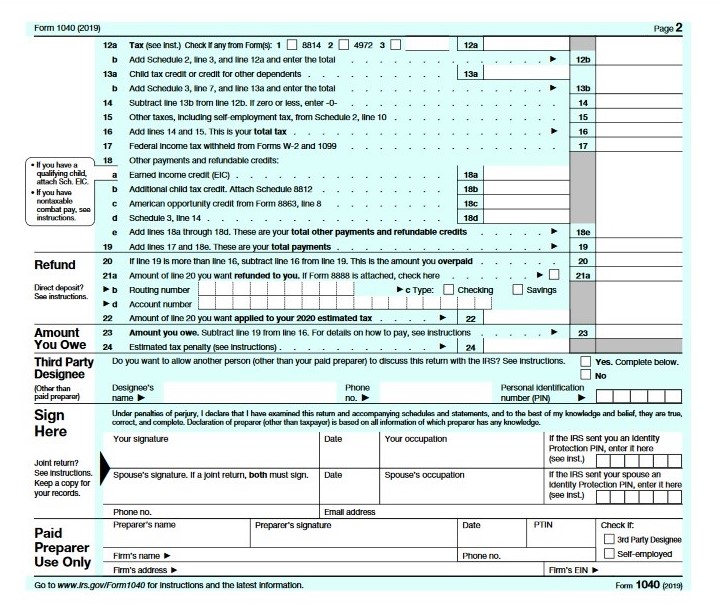 You'll also notice that the Additional Child and American Opportunity tax credits now get specific mentions (lines 18b and 18c, respectively), along with last year's holdovers of the child tax credit and/or credit for other dependents and the Earned Income Tax Credit (EITC).

The amount of your refund and direct deposit info is that's what you choose, along with any amount you owe are still on page 2. There is, though, one noticeable change here. The tax owed section title is back to a pre-tax reform larger font, reinforcing one of the IRS' main jobs.

And now the area where you can name a person who can discuss your return with the IRS is back on the back of the Form 1040. This Third-Party Designee data last year was on the now-gone Schedule 6.

Underneath it is the signature section, which as noted earlier, is back on the second page. But there is another interesting addition.

As the IRS continues its digital shift, there's also a block where, if you choose, you can give Uncle Sam your email address.

The IRS elaborates on this electronic communication entry — and the possibility that it could cause some confusion since the long-standing IRS rule is that generally doesn't reach out to taxpayers via email — in the 1040 instructions:

You have the option of entering your phone number and email address in the spaces provided. There will be no effect on the processing of your return if you choose not to enter this information. Note that the IRS initiates most contacts through regular mail delivered by the United States Postal Service.

You can report a phone scam to the Treasury Inspector General for Tax Administration at IRS Impersonation Scam Reporting or the FTC using the FTC Complaint Assistant at FTC.gov. Add "IRS Telephone Scam" in the notes. You can report an unsolicited email claiming to be from the IRS, or an IRS-related component like Electronic Federal Tax Payment System, to the IRS at phishing@irs.gov.

I'm interested to see future statistics as to how many of us hand over our email address to the IRS.

Finally, while the 2019 tax year version technically is just one more line longer than the 2018 form (now 24 instead of 23), the layout makes it look longer, with the information filling around two-thirds of page instead of just half.

All the additions/returns to Form 1040 mean that in filing your 2019 taxes you'll have to deal with just three numbered schedules instead of six.

As noted earlier, the former Schedule 6 info is now incorporated directly on Form 1040. As for the other five schedules, here's how they've changed and/or merged.

Schedule 1, Additional Income and Adjustments to Gross Income, is still around.

Basically, you report in part 1 of Schedule 1 any additional income, such as business or farm income or loss, unemployment compensation, prize or award money or gambling winnings.

The schedule's part 2 wants to know if you have any deductions to claim, such as student loan interest deduction, self-employment tax, or educator expenses. These adjustments, based on the layout of the old pre-TCJA 1040 were called above-the-line deductions.

There's a line reflecting the IRS' increasing focus on cryptocurrency. If you engaged last year in a transaction involving virtual currency (bitcoin and the like), the tax collector wants details on Schedule 1.

The 2019 Schedule 1 also wants to know about alimony payments, since these amounts are no longer deductible to the payer or reportable income to the receiving ex-spouse for divorces or marital settlement agreements entered into as of Jan. 1, 2019.

Schedule 2, Additional Taxes, remains, but now is a combination of last year's Schedules 2 and 4. As its title notes, it's where you report any additional taxes you may owe.

This could be, in part 1 of this schedule, the Alternative Minimum Tax (AMT) or any excess advance premium tax credit you got to help pay for health insurance purchased from the Marketplace.

Part 2 of Schedule 2 wants to know about any claims you can make for a nonrefundable credit other than the child tax credit or the credit for other dependents. These tax credits include the foreign tax credit, education credits or the general business credit.

Schedule 3, Additional Credits and Payments, also was consolidated with info that previously went on the now defunct Schedule 5.

Part 1 of Schedule 3 is where you claim nonrefundable tax credits that aren't on Form 1040. This includes such tax breaks as foreign taxes you paid, child and dependent care expenses, contributions to retirement savings, residential energy improvements and the Lifetime Learning credit.

Take note of this schedule if you paid estimated taxes or had any of your prior year's tax refund applied to your future tax liability. Those amounts go on line 8 of Schedule 3.

Form for older filers, too: These schedules also are to be used by older taxpayers who opt to file the new Form 1040-SR.

As I noted in my earlier post on the 1040-SR when it was released last year, the appended two letters standing for seniors, as in older taxpayers. In the tax world, that those at least age 65.

If you're like me, getting closer to that birthday than you'd like, don't comment, email or lash out on social media. I agree with you. Mid-60s are the new mid-50s (or younger!). But that's Capitol Hill's and the IRS' evaluation of who counts as a senior citizen.

Eligible 1040-SR filers aren't required to use the form. But if they find it's a good tax fit, then it's available.

Of course, older taxpayers are like the rest of the taxpaying community. They tend to use tax software, too.

So, you're asking, why did I go into such a long post about a form that most of us won't ever actually see as we enter our info by computer or let our tax preparer do the same?

Because, as a wise tax pro told me many years ago when I started writing about taxes, the best way to understand the tax law is to look not at any legislation, but at the tax forms needed to comply with the law.