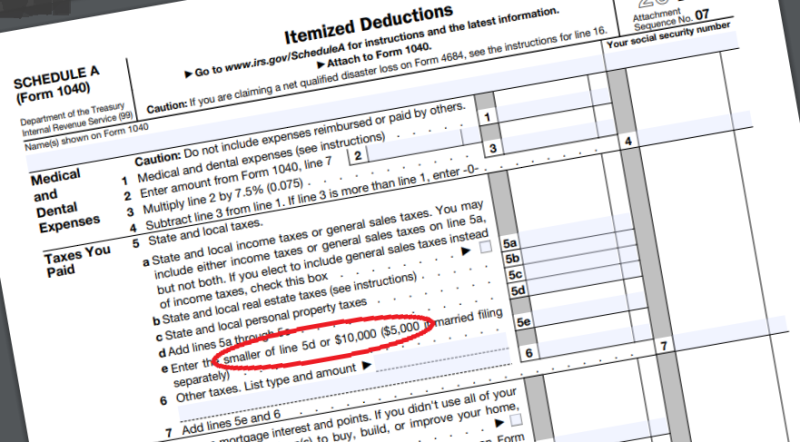 "Do nothing" has long been the derisive descriptor attached to the U.S. Congress.

Actually, though, the House and Senate could more accurately be described as a legislative body that does things that don't have any chance of becoming law.

That's the case most recently with a bill that would eliminate, at least temporarily, the $10,000 cap on tax deductible state and local taxes, referred to by the acronym SALT.

Cutting SALT in the tax diet: The House last week narrowly passed, by a 218 to 206 margin, H.R. 5377, dubbed the Restoring Tax Fairness for States and Localities Act.

It in the years that SALT cap remains in place, which would be through 2025 under the Tax Cuts and Jobs Act (TCJA), the bill would double the deduction for married taxpayers who file joint returns.

The lawmakers who voted for H.R. 5377 know it has no shot of becoming law.

To date, the Senate has moved minimal bills that the House has sent over for consideration. There's no way that GOP-controlled body would OK this bill that attacks a part of the party's tax reform law, its biggest legislative victory so far.

Even the White House has weighed in, saying that if H.R. 5377 somehow does clear the upper chamber, Donald Trump would veto it.

Legislative vs. political calculations: So why even bother?

And before you go there, I'll forever believe that cynicism and reality can exist, especially in the national capital. Here's how that applies in the SALT situation.

Before the TCJA became law at the end of 2017, taxpayers who itemized could deduct all the state and local taxes they paid in a tax year from their federal tax return.

Writers of the TCJA put in the cap to come up with money to offset some of the bill's other tax breaks. But they also noted that the limit would affect primarily wealth taxpayers.

The rich tend to go over the Schedule A deduction limit because they pay more than $10,000 in state and local income taxes on their very high earnings. They also pay big property tax bills on their expensive homes.

These well-to-do taxpayers, argue the SALT cap supporters, can afford to take a bit of a tax hit. Meanwhile, they add, most regular taxpayers don't come near the $10K limit so they don't suffer any adverse tax effects.

Congress' own nonpartisan Joint Committee on Taxation says that by 2021, about half of the benefit of repealing the SALT cap would go to those who earn more than $1 million. The committee's analysis also noted that taxpayers earning less than $100,000 would get almost no benefit from the move.

In some high tax-states, folks who definitely don't consider themselves rich have been affected. This is the case in traditionally Democratic-leaning places like New York, New Jersey, Massachusetts and California.

Even in some redder states, especially areas where real estate has been enjoying a boom, some taxpayers staring at large local real estate bills are upset with the deduction limit.

That's why the House vote on the bill wasn't strictly along Democratic/Republican party lines.

And that's also why both sides weren't too upset about voting on a bill that has no chance of ever making it into law.

Campaign seasoning: The vote came on the eve of 2020, an election year. Both sides will spin it their political ends when they hit the campaign trail.

Those who see the SALT deduction as a giveaway to the rich will point to their no vote on the bill.

And these pro-SALT cap lawmakers definitely will make sure their constituents know they're up in Washington, D.C. (and want to stay there) working for Joe and Jane Average Taxpayers.

Meanwhile, those who support repeal or hiking the SALT cap, either temporarily or for good, are just as happy to go on the Congressional record as being for Restoring Tax Fairness for States and Localities Act.

You can bet that bill title, with fairness emphasized, will be repeated on a loop when they meet with SALT-y voters back home.