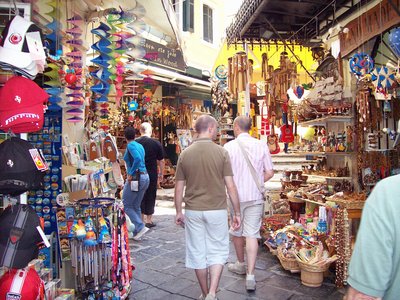 Every day, more Americans go digital, at least partially, when comes to their finances.

We pay via our smartphone features and apps. Our paychecks or gig earnings are directly deposited. Even the Internal Revenue Service is nudging (and sometimes shoving) us to handle our tax tasks electronically.

But we are nowhere near where Greece is going.

That Mediterranean country, the one that's been on the financial edge or over it for years, now is forcing its residents to use electronic transactions equal to around a third of their yearly income.

If they don't, Greek consumers will be hit with a hefty fine.

Unpaid taxes prompt new collection efforts: Taxes are the rationale for the change in spending. Specifically, tax evasion. Even more specifically, to stamp it out.

Greece is regularly listed among the world's largest shadow economies. The Institute for Applied Economic Research's 2017 found that Greece had the largest in the world, being equivalent to 22 percent of gross domestic product.

Unpaid taxes were estimated in 2016 to cost the Greece up to €16 billion ($17.8 billion U.S.) every year, largely through fraud on the value added tax (VAT) on purchases or income tax.

Greeks, both individually and as business owners, say they are enticed to under report earnings and avoid taxation due to the nation's high tax rates and cumbersome bureaucracy.

Whatever the reason they're not being paid, those lost taxes have contributed to Greece's financial woes, leading to repeated bailouts by the European Union (EU).

The government has struggled over the years to counter the revenue shortfalls and catch tax cheats. Greek officials even considered at one point having tourists act as revenue spies.

30 percent digital spending requirement: Prime Minister Kyriakos Mitsotakis has proposed legislation that would require many payments for goods and services be made via electronic means, such as credit cards, online, e-banking and the like.

While the Greek government isn't being specific about the kinds of payments, it has set a number on the amount. The digital transactions must come to at least 30 percent of a person's annual income.

The reason? This type of commerce leaves a trail that tax auditors and collectors can easily follow.

If Greek residents fail to meet the one-third target, they will face a 22 percent tax on the shortfall.

For example, if an individual spends just 20 percent of their income through electronic means, they would face a 22 percent tax on the remaining 10 percent.

Solution or more problems? Some worry that the electronic transaction tax will simply force more people into the underground cash economy.

That's a possibility since many Greek workers are paid in cash and they tend to use that real money to pay rent and other bills.

Also, Greece has one of the lowest internet usage rates, 72 percent, in the EU. Perhaps they should look into Africa's popular and expanding M-pesa.

Still, the Greek government is going to give the new tax plan, which also calls for a corporate tax cut from 28 percent to 24 percent, a shot. If things go as hoped when it's implemented next year, it's estimated to raise around €500 million ($556 million) a year.

Another Greek idea to go global? If the Greek digital transaction requirement (and tax) works, could other countries follow suit?

I think of one of my favorite movies, My Big Fat Greek Wedding (still 76 percent fresh), and how Toula's father Gus constantly and proudly announced Greece as the world's birthplace.

OK, so it's words with Greek roots that Gus is talking about. But, still, never underestimate love, especially love of one's country, and the power of electronic ease.

We'll have to wait to see if Greek's new digital transaction tax does indeed work well enough within its borders to become a global way of monetary life.

In the meantime, Greece's 30 percent digital transaction requirement to avoid a tax penalty is this week's By the Numbers honoree.

Perhaps not the "birthplace of the world" as there are many civilizations that preceded it, but Greece is the birthplace of what is called Classical Antiquity, where the idea of a self-governing citizenry first arose. It was a new ideal that put it in odds with Persia, ruled by emperor gods.

So the Greeks should be proud of their contribution to individual freedom, which is the bedrock of modern democracy. They should be proud of their 22% underground economy, which is nothing more than one's right to pay with cash - legal tender. There is a convenience to paying cash and independence you do not get with digital forms of payment. Not everything needs to be digital, especially not our shopping habits. No need for the government and the banks to know where and when we spend our money. Or how much we spend for that matter. At the very least, you gotta respect people's freedom to chose.

Hopefully, the Greeks will continue to be a beacon to the world and continue to transact in cash. In an era when banks keep your money hostage (via capital controls) and devalue your currency (via stimulus packages) and give haircuts to your bank accounts (Cyprus) and where governments try to tell you the manner in which you are to spend your money, the Greeks, well, just ignore the fools like the person that wrote this propaganda piece of ...

The mode of tax collecting is changed and so does we have to change the system in which tax is collected. There are many online Calculators which are being used to check the actual amount of tax so does one doesn't have to make manual calculations.