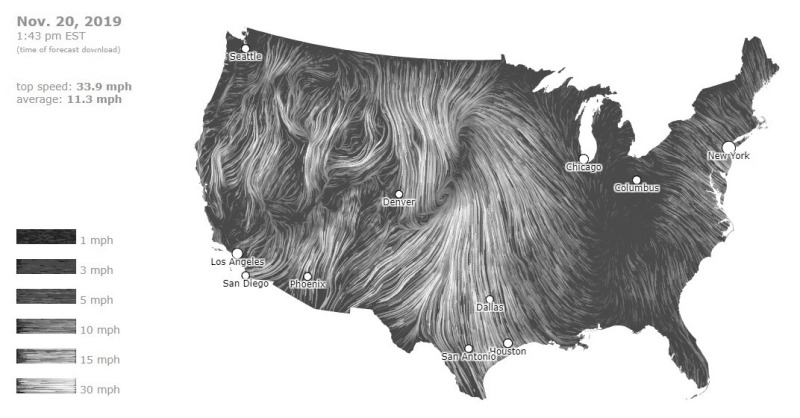 Today I'd rather be in the Midwest, say northern Ohio or Michigan, at least as far as the weather. Yeah, it's chillier than I like, but at least it's not so dang windy.

As the screen shot above of the live wind map wind shows, the rest of the country is dealing with some strong gusts.

Locally, we're at around 13 mile per hour sustained wind, with gusts up to 30 mph.

Where wind pays: You'd think I'd be used to the wind. I did, after all, grow up in West Texas, where the wide-open spaces are perfect to spin turbines, both the old-fashioned many-bladed windmills scattered across ranches and now arrays of giant ones in wind farms.

There's plenty of room to position the massive turbines properly for maximum efficiency. And more days than not, the wind blows in the 50-to-60-mph range, the optional speeds for turning wind into the maximum amount of energy.

That's why right now there are more than 40 different wind-power projects in Texas producing more wind power than any other state. The Energy Reliability Council of Texas (ERCOT) says wind power accounted for at least 15.7 percent of the electricity generated in Texas during 2017. 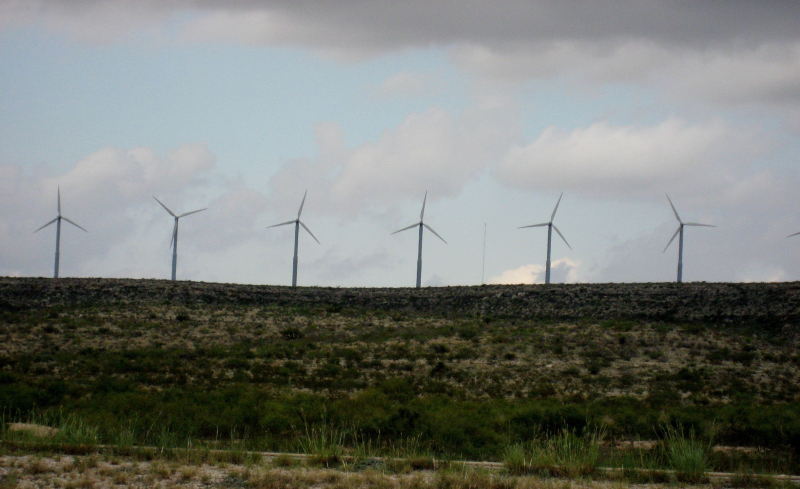 If the Lone Star State were a country, it would rank fifth in the world in wind energy production, as it currently exceeds installed wind capacity in all countries but China, Germany, India and the rest of the United States.

The proposal, spearheaded by Rep. Mike Thompson (D-California) and 19 of Democratic colleagues on the tax-writing House Ways and Means Committee, would extend tax credits for solar and wind power and electric vehicles. It also would create new tax incentives for used electric vehicles, energy storage systems over 20 kilowatt hour (kWh) and offshore wind.

Thompson hailed the bill, titled the Growing Renewable Energy and Efficiency Now, or GREEN, Act, as "a comprehensive approach to tackling climate change by using the tax code to extend and expand renewable energy use and reduce greenhouse gas emissions."

"Estimates say that climate change will cost Americans more than $500 billion each year by the end of this century. We cannot afford to wait any longer to address this existential threat," said Thompson in a statement announcing the GREEN Act. "This bill will build on existing tax incentives that promote renewable energy and increase efficiency and create new models for technology and activity to reduce our carbon footprint."

Renewed and new tax credits: The parts of the discussion draft highlighted by Thompson and his 23 W&M colleagues who worked on it include provisions to:

More specifically on the tax side, the measure would provide the following tax incentives:

Legislative vehicle options: Rep. Richard E. Neal (D-Massachusetts), chair of the Ways and Means Committee, also threw his support behind the GREEN Act, indicating the framework it could soon get a review by the full tax-writing panel.

However, with time running out on 2019 and the work days scheduled by the House and Senate, action on the GREEN Act is far from certain.

It's possible that when (if?) federal lawmakers finally get around to addressing the expired/expiring tax breaks known as extenders, and which already include some energy provisions, the GREEN Act language could be included in that measure.

There also could be an effort to attach the energy measures to must-pass legislation, such as a final federal government fiscal year spending bill. The House on Nov. 19 passed a continuing resolution to keep the government operating through Dec. 20. The Senate is expected to pass the measure soon, with the White House indicating it would sign the short-term funding extension.

But as for longer-term tax legislation, energy-related or otherwise, the prospects on the other side of Capitol Hill are less clear.

While some energy tax credits, such as energy storage, have bipartisan support, there is more division between the Senate's Republican majority over how or even whether to address these issues now.

And, as noted, time is short.