Welcome to Part 8 of the ol' blog's 2020 series on tax inflation adjustments.
We started on Nov. 6 with a look at next year's income tax brackets and rates.
Today we look at considerations of U.S. taxpayers living and working abroad.
Note: The 2020 figures in this post apply to 2020 returns to be filed in 2021.
For comparison purposes, you'll also find 2019 amounts to be used
in filing 2019 returns due April 15, 2020. 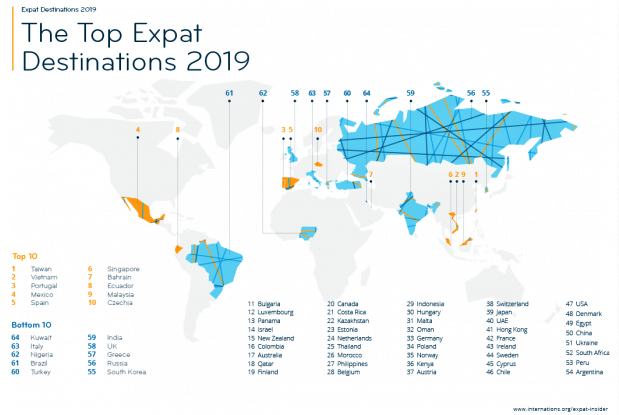 Where's the best place for the world's millions of expatriates? InterNation's latest annual Expat Insider Survey says it's Taiwan. Regardless of where they go globally, U.S. residents who move abroad for work or to follow a dream still have to deal with the Internal Revenue Service.

People definitely are peripatetic. Millions of us move every year, crossing national borders to set up new homes.

Sometimes it's to fulfill a lifelong dream. Other times it's a work opportunity.

For most, leaving behind a home country is worth it.

Many Americans who go abroad, however, find there's one U.S. institution they can't escape: the Internal Revenue Service.

When it comes to individual taxpayers, Uncle Sam still relies on a worldwide tax system. That means the IRS collects a portion of citizens' or resident aliens' incomes regardless of where in the world they earn their money.

There are, however, some tax benefits for U.S. workers abroad. And they also are affected by inflation.

Excluding foreign-earned income: The most notable tax break is the foreign earned income exclusion, or FEIE. This allows workers abroad who meet certain requirements to legally avoid paying U.S. tax on some of their foreign wages.

Since inflation is a global phenomenon, it's only fitting that this U.S. tax exclusion amount is adjusted annually for inflation.

First, start with your residential expenses. And note that the IRS says they must be reasonable. If you decide to go lavish a la Elvis' Graceland (Thank you, thank you very much), Donald J. Trump's gold-plated Manhattan apartment (which could soon be on the market as he transitions to full-time Florida Man) or the South Florida waterfront mansion pictured below, the excessive costs won't pass the tax man's muster. 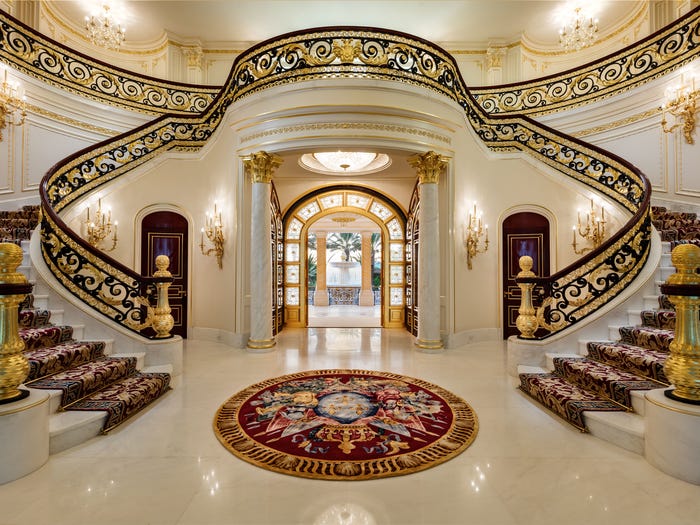 Nestled between the Atlantic Ocean and the Intracoastal Waterway, the entry into this Playa Vista Isle home features a 12-foot-high, 22-karat gold door and double staircase made of South African marble. (Image courtesy Concierge Auctions)

When all the multiplying and subtraction is done, the final 2020 computation means that the most many foreign-based workers next year can exclude housing costs from their income of only $14,826.

That's a $193 increase over the 2019 housing exclusion amount calculated below:

The Department of State tracks the cost-of-living worldwide and grants an allowance to employees officially stationed in a foreign area where the cost of living, exclusive of quarters costs, is substantially higher than in Washington, D.C.

For example, a U.S. worker who for all of 2019 rents a home in expat-favored Taiwan, specifically in Taipei, which per the State Department has a 15 percent higher cost of living, can exclude from income the difference between $46,188 (the IRS announced limitation for that Asian nation's capital) and this year's $17,261 base housing amount, or $28,927 in housing costs.

We won't know the 2020 higher-priced residential areas until spring of next year when State and the IRS release those figures.

More foreign tax info: Whatever reason you're headed abroad, enjoy soaking up another country's culture (and great food!). And use these tax breaks to make sure you pay the U.S. Treasury less so that you can spend those tax savings exploring your expatriate home.

You can read more about foreign tax issues in general in IRS Publication 54, Tax Guide for U.S. Citizens and Resident Aliens Abroad. It should be updated soon for the 2019 tax year.

The IRS also has special pages with details on the foreign earned income exclusion. That page is a bit slow (OK, more than a bit since the latest inflation adjustments shown are for 2015), but it does have a link to an interactive tool where you can see if you're able to exclude income in a foreign country.

Finally, you also might find these blog posts about global taxes of interest: