Donald Trump, especially early in his presidency, spent a lot of time at Mar-a-Lago, his South Florida club and residence. Here, Trump and Melania in April 2017 welcomed the People's Republic of China president Xi Jinping and his wife Peng Liyuan to the Palm Beach abode. Now Trump says it, not Trump Tower in New York City, will be his official residence. (Photo via Trump's Twitter account and Wikipedia Commons).

The hubby and I used to live in Donald J. Trump's future full-time home. Alas, for us, we weren't on the fancy schmancy island of Palm Beach, but still in a pretty nice community in the northern part of Palm Beach County.

Although I loved our years in Maryland, I must admit it was nice to get back to a no-income-tax state.

Following our excursion to Florida, we ended up back in our native Texas, another one of the seven (soon to be eight) states that doesn't tax any personal income.

Is this tax break why Trump has decided to forego his New York residency and officially make the Sunshine State his home? Maybe.

Is it that easy? Not really.

Basic tax residency rules: Generally, your domicile for tax purposes is the place you treat as your primary and permanent home. It's also where you intend to return if you're living or working temporarily in another state or country.

You can have only one domicile.

It doesn't change until you abandon it in one state and reestablish it in another.

States look at many factors to determine which location is your real domicile and no single issue is determinative. Common factors include where you spend most of your time, vote, open bank accounts, conduct business, obtain a driver’s license, register vehicles, maintain professional licenses, visit doctors, join clubs and the like.

If you don’t have sufficient contacts and evidence that where you live is your official tax domicile, most states will presume you’re a resident if you spend six months or more there during the calendar year. A handful of states — Alabama, Arizona, California, Hawaii, Idaho, North Dakota and Ohio, according to Kiplinger's tax newsletter — require more time within their borders to qualify as a legally domiciled resident.

Declaring domicile only one part: As you would expect, high-tax states like New York are always on the lookout for dubious residency claims by second-home owners (aka snowbirds) who try to use those pieces of out-of-state property avoid bigger tax bills.

That's why Trump's declaration of domicile is just one part. And it might not be enough to fully avoid New York's tax collector.

"Simply declaring [Florida residency] does absolutely nothing, it’s a minor consideration," says attorney Lou Vlahos, partner at law firm Farrell Fritz in Uniondale, New York. "The fact remains that his business is up here. That will doom him. He'll very likely remain a New York domiciliary."

That business connection, adds Vlahos, is why financier Carl Icahn moved his whole operation to Florida. But, he notes, "you can't do that with real estate," which is Trump's primary business.

The matter of tax residency earns this week's early Saturday Shout Out, or as it's known when I shift the usual weekend feature to the end of the week, Friday Focus.

"There are instances in which an individual taxpayer who is not domiciled in New York will nonetheless be treated as a resident of New York for a particular tax year," writes Vlahos. "

"Unfortunately for most taxpayers, they are not aware of their classification as a 'statutory resident' of New York until they have been audited by the state's Department of Taxation and Finance, at which point they face not only a tax deficiency, but also interest and penalties," adds Vlahos.

Also unfortunate for former (or those who think they are former) New Yorkers, the Empire State tends to be very aggressive in collecting any tax it believes it is owed, even (or particularly) from folks in other parts of the country.

Living dual resident lives: That leads to this week's second shout out — actually second and third — to CPA Peter J. Reilly's recent articles in Forbes, for which he's a contributor.

In his Nov. 1 (today's) piece, Reilly notes that "it is hard to establish that you have become a Floridian, because it is not quite the distinctive identity that being a New Yorker is. And domicile does turn on irrational factors."

Reilly also wrote about What Happens When You Are A Full Year Resident Of More Than One State back in August.

It deserves a look in like of Trump's frequent shuttling between D.C. and, before he moved into the White House, New York and Mar-a-Lago. 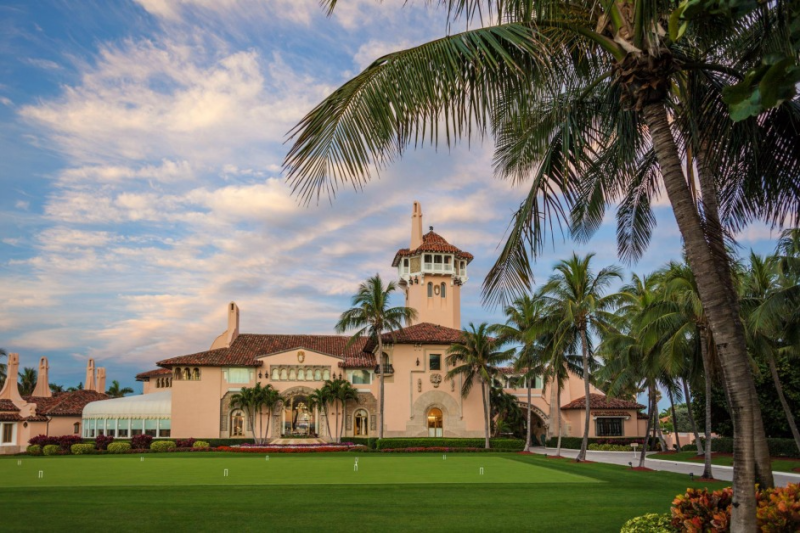 One of the views of Ma-a-Lago showcased on the private club's website.

It also deserves a look if you happen to be snowbirds, like our neighbors on either side of our former full-time Palm Beach County residence.

A new Florida man to follow: Finally, Reilly and I, both devotees of Twitter, had the same thought when we saw the headline about Trump's plans to permanently decamp to the Sunshine State

His Florida Man identity — originally @_FloridaMan and now replaced by @FloridaMan__ — was first defined on Twitter in 2013 as the "world's worst superhero."

Since then, wrote Logan Hill for The Washington Post, "many men (and it's almost always men) have assumed the mantle. He is a man of a thousand tattooed faces, a slapstick outlaw, an Internet-traffic gold mine, a cruel punchline, a beloved prankster, a human tragedy and, like some other love-hate American mascots, the subject of burgeoning controversy."

I guess we'll just have to see if the new Florida-based Trump can live up (or down) to the social media mantle.