Gas prices are down, but state gas excise taxes are up this Thanksgiving road trip season

More than 55 million people are expected to travel this Thanksgiving week, according to AAA, with the majority of them doing so via vehicle. If you're among this group of travelers, drive safely! (Photo by Reinis Traldas via Flickr CC)

The hubby and I aren't going over the Pedernales River or through the Hill Country meadows this Thanksgiving.

In fact, we usually don't. We have our own small family spread of Texas smoked brisket, sausage and all the yummy sides like ranch beans, coleslaw and potato salad.

We do incorporate a few traditional Turkey Day elements into our November holiday. I make cornbread and the hubby handles the pumpkin pie (or two).

But I did do one thing that millions of Thanksgiving travelers have done or will do this week. This morning I filled up my car.

Gas price bargains: Even though it'll stay parked in the garage this week, I couldn't resist.

Gasoline prices here in Central Texas have been dropping recently. When I saw regular at $2.10 a gallon, that was it.

For the majority of Americans, AAA expects gas prices to be fairly similar to last year's Thanksgiving holiday, which averaged $2.57.

Yep, I am so glad I took advantage of what looks to be bargain gasoline here in CenTex.

If your fuel is cheaper, too, great! Any savings will be welcome by the more than 49 million folks that AAA says will be hitting the highways this week.

Maybe these drivers can spend the saved fuel dollars on roadside treats to quiet down impatient young (or older) passengers who just can't stop asking, "Are we there yet?"

Gas taxes and fuels prices: One thing that tends to be a constant when it comes to gasoline prices is the excise tax that states collect on the fuel.

Sure, lawmakers can bump it up or, rarely, lower it. And some taxes and fees are tied to inflation.

But usually, once a state sets a fuel tax for a calendar or fiscal year, we drivers are stuck paying it for the next 12 months when we refuel our vehicles.

So what do those taxes mean to Thanksgiving 2019 road travel? Below is the American Petroleum Institute's (API) latest quarterly map of the gas excise taxes across the United States. 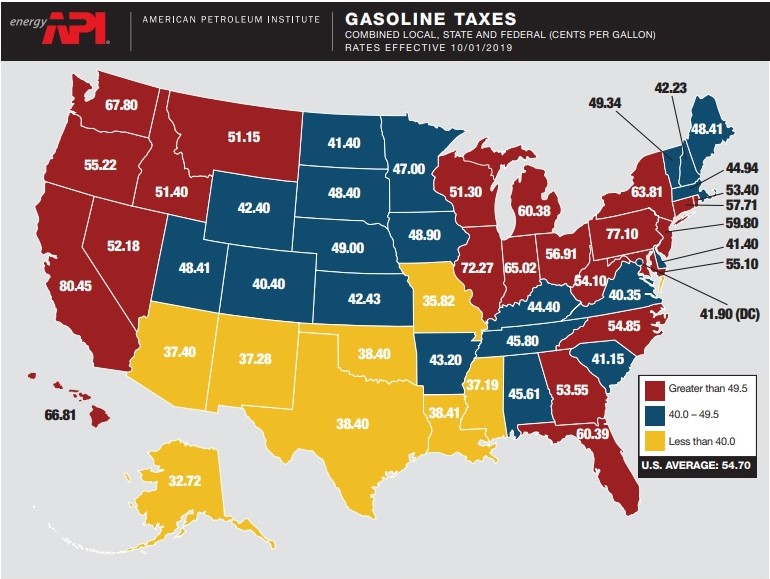 API also has an interactive map that gives you gas tax specifics for each state.

Overall, says API, the nationwide average tax on gasoline is 54.70 cents per gallon (cpg), up 0.13 cpg from the July 2019 study. Note, tough, that the July report was based on second quarter amounts (April, May and June) and many states implement new legislation, including gas tax hikes, on July 1 each year.

Various tax components: There are myriad considerations that go into the price of a gallon of gasoline across the United States.

And as with all taxes, gas tax calculations and comparisons are not simple.

API's figures from which its map is made reflect, says fuel trade group, a weighted average for each state. This means that any taxes which can vary across a state's jurisdiction are averaged according to the population of the local areas subject to each particular tax rate.

In breaking down the fuel factors, API's July report notes that the average state gasoline excise tax is 24.99 cpg, up 0.14 from the July 2019 study.

Adding these taxes and fees to the state excise taxes results in a volume-weighted average state and local tax of 36.30 cpg.

And where appropriate, the weighted average also takes into consideration the typical percentages of premium, midgrade, and regular fuel purchased in each state. In states where taxes vary depending upon the price of the motor fuel (for example, where the tax rate is set as a percentage of the sales price rather than a cents per gallon method), the state average listed on the chart is a snapshot based upon the price of fuel (as reported by AAA) on the date the chart is updated.

On-the-road tax diversions: If your Thanksgiving trek this year is long — AAA uses trips of 50 miles or more away from home in its holiday travel projections — this Thanksgiving, maybe you can link to the latest API report and more detailed state-by-state notes and let the kiddos read them on their mobile devices.

Even more fun, they can share the details of the fuel taxes with you, Mom and Dad, as you go from state to state en route to your final Thanksgiving destination.

Sort of a tax-themed version of the old license plate road trip game.

Now you know why the hubby and I, even though we don't have youngsters, decide not to travel on holidays.

Regardless of how you're getting to your Thanksgiving celebration, or if you're like the hubby and me and are simply staying home, I hope you have a wonderful time with your family and friends.

I guess they're still lower than any time in history.