Casper, with almost 58,000 residents, is the second-largest city in Wyoming. Despite having few metropolitan areas, the Cowboy State again reigns as the place with the best business tax climate. (Photo by Adbay via Wikipedia Commons)

The focus on the economy tends to be national. But businesses and consumers deal with the economic — and tax — conditions of 50 different states and the District of Columbia.

Each year, the Tax Foundation takes a look at those various and varying economies and issues its State Business Tax Climate Index.

And while the report focuses on the tax climate for businesses, the data show that individual income and sales taxes play important roles in the state rankings.

So which jurisdiction takes the top and bottom spots in the 2020 report?

And once again, New Jersey gets the lowest ranking.

Top 10 for 2010: The measure of total taxes paid is relevant, but other elements of a state tax system can also enhance or harm the competitiveness of a state's business environment, notes Jared Walczak, the Tax Foundation's director of state tax policy.

Other elements of a state tax system can also enhance or harm a jurisdiction's competitiveness, says Walczak. That's why the annual index uses more than 120 variables in the five major areas of taxation— corporate, individual income, sales, unemployment insurance and property taxes — to compare states and the District of Columbia.

All that figuring put the Cowboy State at the top of the latest State Business Tax Climate Index. It's held the top spot since 2014 (and before).

The complete top 10 list of states with the best business climate are:

Places six through nine traded spots with each other, with #10 Indiana holding that position for a second consecutive year.

Shared tax attributes: A notable factor about the top 10, writes Jared Walczak, the Tax Foundation's director of state tax policy, is that most of them don't have a major tax.

"Property taxes and unemployment insurance taxes are levied in every state, but there are several states that do without one or more of the major taxes: the corporate income tax, the individual income tax, or the sales tax," says Walczak.

Wyoming, Nevada and South Dakota have no corporate or individual income tax. Nevada does, however, impose gross receipts taxes.

Alaska has no individual income or state-level sales tax.

Florida has no individual income tax.

New Hampshire, Montana and Oregon have no sales tax.

Worst business climates: At the other end of the tax climate are the 10 states with the least welcoming tax-related business policies.

Once again, we have a repeat winner, uh, loser. The Garden State has ended up at the bottom of the Tax Foundation's index every year starting in 2015.

And once again, the business climate's bottom 10 also share some tax traits.

"The states in the bottom 10 tend to have a number of afflictions in common: complex, nonneutral taxes with comparatively high rates," writes Walczak. "New Jersey, for example, is hampered by some of the highest property tax burdens in the country, has the second highest-rate corporate income tax in the country and a particularly aggressive treatment of international income, levies an inheritance tax, and maintains some of the nation’s worst-structured individual income taxes.

Notable changes in the middle: The map below provides an overview of where the states and D.C. rank in the 2020 index. 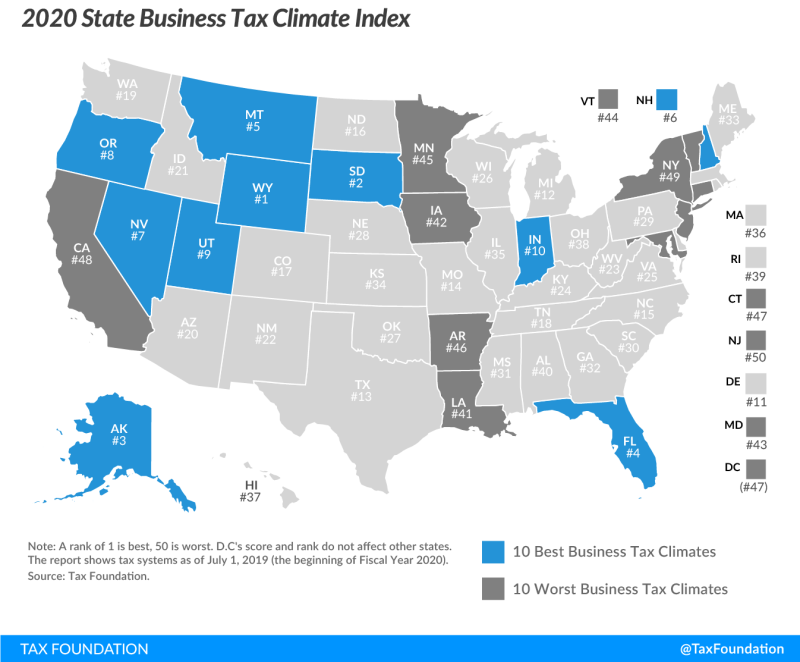 You also can find additional tables and more on the notable ranking changes, particularly among those 31 jurisdictions in the middle of this year's index at the Tax Foundation's website overview and in the full report.

Tax-law changes effect on future rankings: Of particular interest is how the Tax Foundation's 2020 analysis incorporated two major developments that, the tax policy nonprofit notes, "have remade the state tax landscape like no other changes in decades."

They're talking, of course, about the major federal changes under the Tax Cuts and Jobs Act (TCJA) in late 2017 and the U.S. Supreme Court's ruling in June 2018 in South Dakota v. Wayfair that economic, not physical, nexus can be used as a basis for remote sales tax collections.

It will be interesting to see, as states reassess their policies in connection with these tax matters, how future rankings might change.

Until then, enjoy checking out how your state's tax system compares to the others across the United States and what that means to business already there of who might be considering a move to a more tax-friendly climate.