No luxury tax for 2019 World Series competitors, but it's on the Astros' minds for 2020 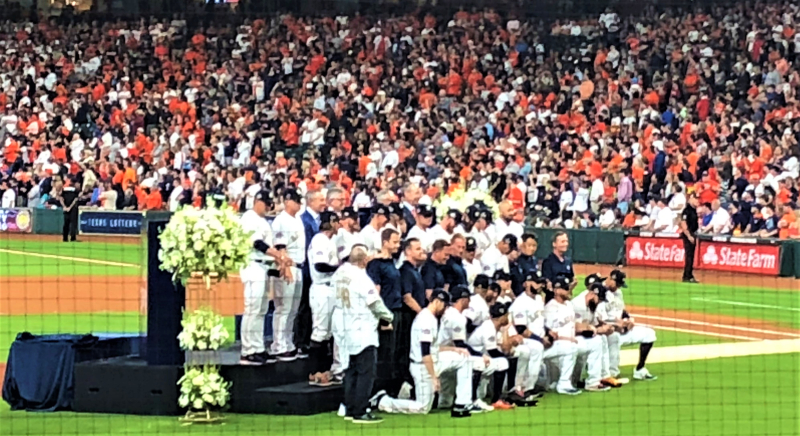 The hubby and I got to see the Astros receive their 2017 MLB championship rings back in April 2018. Our fingers and toes are crossed this week for a repeat of that World Series outcome and another trip to Houston for a second ring ceremony. (Photo by Kay Bell)

The 2019 World Series starts tonight and the best pitcher in Major League Baseball right now will be on the mound.

The good news for me and other Astros fans is that that righthander, Gerrit Cole, is on our team.

The bad news for me and other Astros fans is that this could be, depending on how long the baseball championship series goes, Cole's last start in Minute Maid Park as a part of home team.

The reason is that Cole's contract is up at the end of the MLB season and he picked the perfect time to have an almost perfect season. I won't bore non-baseball fans with the details. You can read about his dominance in this SB Nation story.

And as much as all Astros fans — and probably team management, too — would like to keep him, it's unlikely the Astros will pay the price that Cole can command.

The problem isn't so much the estimated multi-million deal (some speculation is $231 million over seven years) Cole will get.

It's that if the Astros paid Cole's market price, they'd end up owing MLB's luxury tax.

Paying to be the best: OK. The luxury tax's real name is the competitive balance tax.

And OK. It's not a tax in the strict sense that the money is paid by community members (although players' salaries eventually affect ticket prices fans pay) to support projects that are deemed for the common good (although major league franchises argue that their sports' ancillary income provides cities added revenue, along with intangibles such as athletes involvement in the communities).

The pros and cons of sporting franchises' public and fiscal values or costs are many and a topic for a future post.

Today, however, I'm having a hard time today focusing on anything except the Astros and the World Series. So this sports-related luxury tax, semantics aside, is going to have to suffice as today's blog item.

Whys and wherefores of MLB's tax: The luxury tax — yep, that's the name I prefer, since sports for most of us is an entertainment luxury — is the how MLB tries to keep the free-spending richer owners from packing their teams with top talent.

The goal is to punish them financially so that they'll let some players go to other teams, thereby, theoretically, making more teams more equal on the fields.

The luxury tax is imposed on a team when its total payroll exceeds a certain amount previously defined in the league's collective bargaining agreement with its players.

And like the income tax system under which you and I pay a part of our annual earnings to Uncle Sam, baseball's luxury tax is progressive.

If an owner insists on stockpiling the best players despite their prices and the tax, MLB jacks up the levy for the repeat, in their view, offenses.

So you can see how Cole's potential payday, even spread over several years, can pose a luxury tax concern for the Astros.

And like the real-world taxes on bad behaviors like smoking (and now vaping) or consuming high-calorie food or sugary beverages, the results are mixed.

In some cases, the tax cost does deter what the tax creators deem are bad habits. Cigarette taxes has been the most effective, especially in keeping young people with less disposable income, from spending their scare funds on cancer sticks.

In other cases, folks just decide screw it. I like what I like and I'm buying it, taxes be damned.

Even when the taxes do dissuade sales of certain items, taxing jurisdictions then have to deal with reduced income. So from a revenue perspective, the taxes cost cities, counties and states operating revenue.

Expenditures and tax don't always pay off: It's similar with Major League Baseball.

Some teams decide the tax is worth it, at least for year or two, to make their teams better.

In recent years, MLB powerhouses New York Yankees, Boston Red Sox and Los Angeles Dodgers have paid luxury taxes. But only Beantown's team took home the title and their free-spending executive got the ax a couple of week ago.

The Washington Nationals, who are the Astros' World Series opponent this year, also paid the tax, although it was back in 2018 and the team didn't make playoffs last year.

Personally, I wish Astros' owner Jim Crane would shell out whatever it takes to keep Cole in Houston.

Hey, he got a deal when he bought the team at a discount. It's not his prime business, but is raking in the bucks. And he's a billionaire. So c'mon, Crane, give the man the money!

But, natch, it's not my money or team.

So I guess I just have to keep trusting 'Stros general manager Jeff Luhnow and coach A.J. Hinch, who appear to have a pretty good handle on talent they think they need, can afford and make the most of on the field.

Still, I'm not ruling out a Go Fund Me by fans to keep Gerrit Cole in Space City!