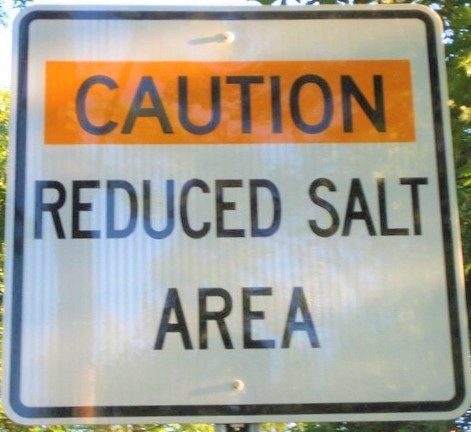 Reduced salt isn't just an issue for road safety or healthier diets. It's a contentious part of the Republican tax reform law.

Many U.S. homeowners who each year face increased property taxes tend to hate the Tax Cuts and Jobs Act (TCJA).

New law prompts wider use of old loophole: This tax deduction workaround was in place in some states even before the TCJA changes, largely as state funds that benefit private schools.

The charity deduction option spread after the new tax law and its $10,000 SALT deduction limit was enacted in December 2017.

Under the taxes-turned-into-donations system, taxpayers would give, for example, the $20,000 that equaled the amount paid in state and local income and property taxes to their state's new charity. In return, they would get an 80 percent state tax credit for the charitable gift and a $20,000 charitable gift claim on their federal tax returns.

The IRS did not look kindly on what it saw as state-sponsored attempts to circumvent the new federal tax law.

In August 2018, the IRS issued a rule, detailed in Treasury Regulation 112176-18, saying states could keep making the tax-to-donation shift. But, and here's the real issue, the IRS said donating taxpayers could only deduct the amount that was more than any state credit they received for their state-sponsored donations.

So instead of deducting the full donation to the state fund, taxpayers must subtract the credit they got from the state. In the $20,000 given in the example above, that's a $16,000 reduction, meaning a federal charitable tax claim on Schedule A of only $4,000.

And that means the taxpayers would be better off just paying their state and local taxes as usual and claiming the $10,000 now allowed.

IRS uses existing law to support limit: The IRS didn't write new law here. Its regulation essentially follows the longstanding donation rule that anything you receive for a donation must be subtracted from your gift amount to arrive at the allowable tax-deductible amount.

Or, as tax geeks who also are public broadcasting fans refer to it, the PBS tote bag rule.

You give your local PBS television or radio station $100 and get a $10 tote bag as a thank-you gift. You can only claim $90 on your federal taxes.

And Schumer, whose New York constituents are among those most hurt by the $10,000 cap, used a rather arcane legislative tool in the attempt.

Congress has the ability under the Congressional Review Act to overturn recently issued federal rules — Treasury issued the final rule in June — with a simple majority of both chambers of Congress and approval of the president.

"I think we are very, very close," Schumer said before the vote.

It was no surprised that California and New Jersey lawmakers supported the New Yorker's effort. Property owners in those three states bear the brunt of the deduction limit.

However, says Schumer, it's not just residents of those primarily Democratic states who are suffering.

"The devastation in New York is very, very bad," the Empire State senator told the Associated Press, adding that the law also is affecting "many Republican states" with suburban neighborhoods where homes face high tax valuations.

He also cited the charitable programs in Kentucky, South Carolina and Colorado, three states with Republican senators, who have said they would be hurt by the new rule.

That's why, Schumer told the wire service, he was optimistic about getting enough Republican votes.

"I think we are very, very close," Schumer said.

But not close enough. The effort failed on a 52-43, mostly party-line vote.

House passage would be easier: The result wasn't really a surprise. Such Congressional Review Act-based votes haven't been that successful.

And despite Schumer's optimism about Republican help, the reality exhibited by today's defeat is that the GOP-led Senate isn't going to break ranks when it comes to the party's only major piece of legislation to make it into law since Donald J. Trump moved into the White House.

In fact, one Democratic Senator, Michael Bennet of Colorado, voted against the rule repeal.

The prospect of changing the SALT limitation in some form seems to have more support on the other side of Capitol Hill.

Democrats, who took control of the House after the 2018 midterms, already have indicated their desire to remove or revise the SALT deduction limit.

Several House bill already have been introduced to do that, including Rep. Bill Pascrell's (D-New Jersey) H.R. 1142, which has a Senate counterpart in Sen. Robert Menendez's (D-New Jersey) S. 437, that would repeal the cap and raise the top income tax rate.

H.R. 1757, sponsored by Illinois Democratic Reps. Lauren Underwood and Sean Casten, would increase the cap to $15,000 for individuals and $30,000 for couples.

Not likely to be the last effort: Although Schumer's SALT limit effort failed, it likely won't be the last.

The TCJA's $10,000 cap is in place though 2025, but some Democratic victories in the Senate next year, as well as the outcome of the 2020 presidential vote, could dramatically change the landscape for this TCJA provision.

I don't see why anyone needs more than $10000 tax deduction for RE taxes and state income taxes. If they have more than $10000 in these expenses they are wealthy and can afford not taking a federal deduction beyond $10000. I'm retired, have a 7200 sq ft brick home, a 3 bedroom mountaintop cabin and an adjacent mountaintop lot and my total RE taxes are only $8800.