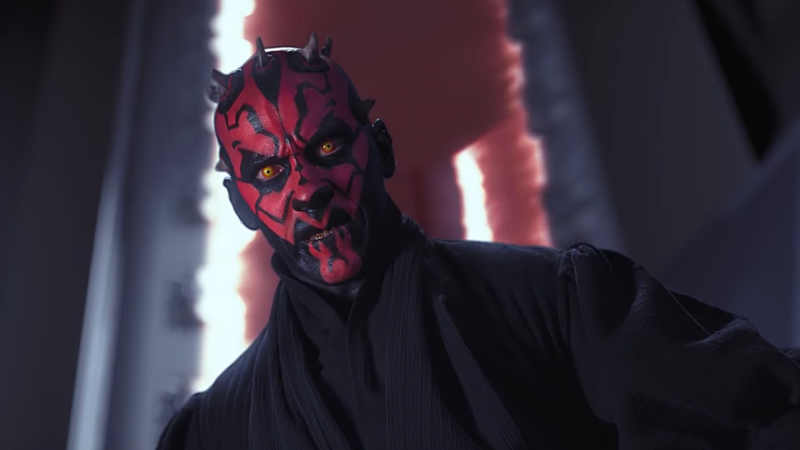 Darth Maul apparently — spoiler alert — was killed in The Phantom Menace, but later showed up in subsequent Star Wars productions. His persistence is akin phantom investment transactions that are created simply to lower multinational companies' tax bills. (Photo via Lucasfilm)

What I consider the real Star Wars trilogy came out when I was in college. That's why I've not bothered to see any of the subsequent sequel/prequel movies.

But they came to mind last week when the International Monetary Fund (IMF) and the University of Copenhagen released a new study on the growth of so-called phantom capital and its costs to global economies.

This tax version of The Phantom Menace is phantom foreign direct income (FDI). Essentially, this is investments passing through empty shell companies without any real business activities, but rather to simply to lower the tax bills of multinational companies.

FDI now accounts for, in the words of the IMF study's authors, an "astonishing" $15 trillion globally.

That amount is about the same as the combined yearly economic output of China and Germany.

It's also substantially more than what all the various Star Wars' films have grossed globally over the decades.

That's also enough for the IMF $15 trillion figure to earn this week's By the Numbers recognition.

That's why so many countries establish policies to attract more of it.

But not all FDI, defined as cross-border financial investments between firms belonging to the same multinational group, brings capital in service of productivity gains.

Much FDI is phantom in nature. The so-called investments pass through empty corporate shells, also known as special purpose entities that have no real business activities.

Study authors Jannick Damgaard, Thomas Elkjaer, and Niels Johannesen* say that while phantom FDI doesn't produce the traditional types of economic results for the nations receiving the funds, it does pay off for them.

*Jannick Damgaard is adviser to the executive director in the IMF's Office of the Nordic-Baltic Executive Director. Most of this research was carried out in his previous role as senior economist at the National Bank of Denmark. Thomas Elkjaer is a senior economist in the IMF's Statistics Department. Niels Johannesen is a professor of economics at the University of Copenhagen's Center for Economic Behaviour and Inequality.

"Even if the empty corporate shells have no or few employees in the host economy and do not pay corporate taxes, they still contribute to the local economy by buying tax advisory, accounting, and other financial services, as well as by paying registration and incorporation fees," writes the trio.

The usual tax haven suspects: One thing that's not surprising is the list of nations that welcomes phantom FDI.

The usual well-known tax haven suspects host the vast majority of the world's money movements for tax purposes. Specifically, according to the report:

"Luxembourg and the Netherlands host nearly half. And when you add Hong Kong SAR, the British Virgin Islands, Bermuda, Singapore, the Cayman Islands, Switzerland, Ireland, and Mauritius to the list, these 10 economies host more than 85 percent of all phantom investments. … For the tax havens in the Caribbean, these services account for the main share of GDP, alongside tourism."

In less than a decade, phantom FDI has climbed from about 30 percent to almost 40 percent of global FDI, as the graphic from the report below indicates. 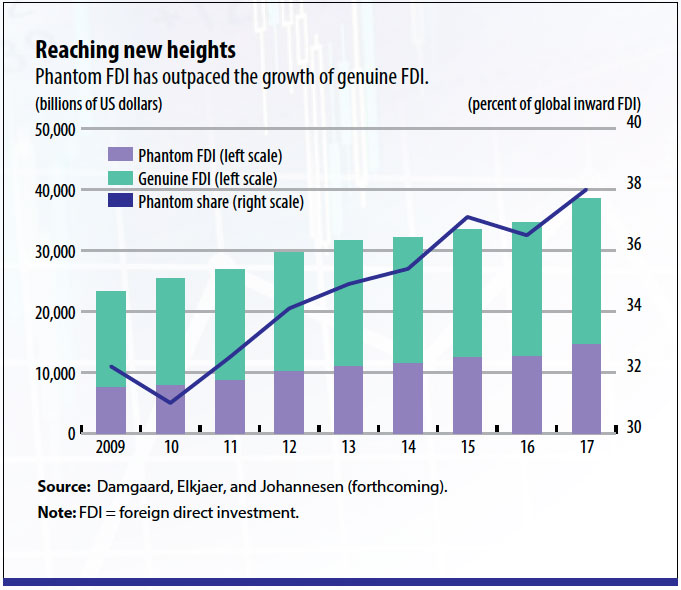 "This growth is unique to FDI," note Damgaard, Elkjaer and Johannesen, with FDI positions growing faster than world GDP since the global financial crisis.

All countries affected: While phantom FDI is largely hosted by a few tax havens, the trio of economic researchers say that "virtually all economies — advanced, emerging market, and low-income and developing — are exposed to the phenomenon."

"Most economies invest heavily in empty corporate shells abroad and receive substantial investments from such entities, with averages across all income groups exceeding 25 percent of total FDI," according to the report.

These investments in foreign empty shells could indicate that domestically controlled multinationals engage in tax avoidance.

This data will be key in helping worldwide policymakers as they attempt to address international tax competition and work together to deal with taxation in today's globalized economic environment.