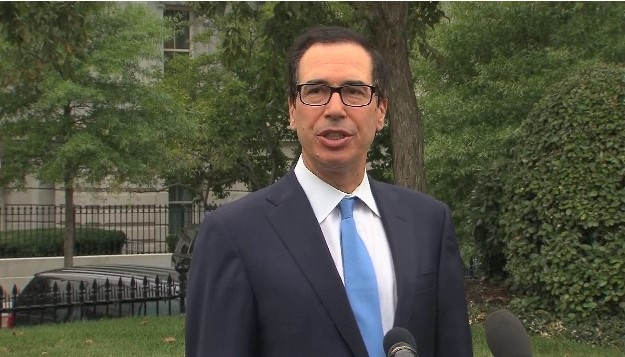 Click image to watch Treasury Secretary Steven Mnuchin's touting of Tax Reform 2.0 in 2020 via The Hill.

There's not much hope that a divided Congress will get much done on taxes in the remaining months of 2019, but at least one Trump Administration official is more optimistic about 2020.

Will Tax Reform 2.0 actually happen in 2020? Is this just a political ploy leading into what could be a difficult re-election campaign? Will tax cuts become the new Infrastructure Week?

My answers: No, probably and highly likely.

Unpopular tax cuts: Expanding the tax reform that Trump and the GOP House and Senate were able to push through at the end of 2017 has long been a goal of the party.

That effort has intensified as it became clear that the general taxpaying public wasn't as enamored of the Tax Cuts and Jobs Act (TCJA) as its creators had hoped.

Although individual tax rates were lowered, a RealClearPolitics average of polling from April and May showed that Americans disapprove of the new tax law by a 39 percent to 34 percent margin.

The big problems with the tax reform measure are that it provides more tax breaks to the wealthy than the working class and the individual tax breaks expire at the end of 2025.

The Senate never took up the House measure.

And any chance of extending TCJA provisions effectively died when Democrats regained control of the House a month later.

Election, recession fuel tax talk: So why, with a politically divided Congress, is Mnuchin even talking about additional tax legislation?

Conventional (and cynical) wisdom is that the possibility of a middle-class tax cut is again politically motivated.

But with another and more important to the White House election day on the horizon, tax cut talk has resurfaced.

Growing fears of a recession during a presidential election year also are adding intensity to the discussion. Trump's economic approval rating has dropped from 51 percent in July to 46 percent in a new Washington Post-ABC News poll.

However, Mnuchin insisted in his impromptu press conference that economic worries have no bearing on possible new tax cut legislation.

"I think there's no question the U.S. economy is in very good shape," the Treasury Secretary said.

Tax talk is just that: Some of the spaghetti thrown against White House walls tax cut ideas floated recently by Administration officials include even lower individual tax rates, lower capital gains rates, changes for businesses other than corporations and relief for residents of high-tax states.

Of course, all this new tax cut talk is just talk, what with the current political split in House and Senate control.

But look for the tax chatter to ramp up as we get closer to Nov. 3, 2020, especially if the economic numbers do start going against the current White House.