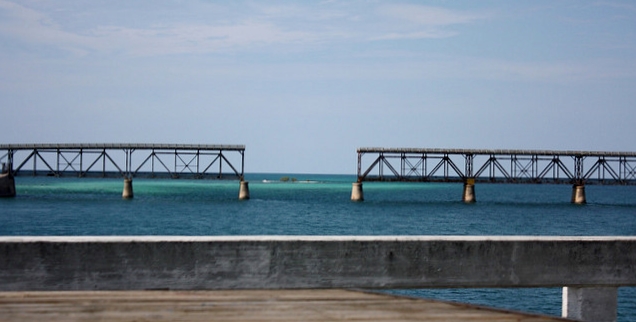 The tax gap is holding as steady as this gap on the old Florida Keys bridge. (Photo by Ewen Roberts via Flickr)

We might want to revise Benjamin Franklin's famous tax saying. The new version could read, "In in this world nothing can be said to be certain, except death, taxes and the tax gap."

The tax gap is the difference between the amount of tax that filers should pay and the amount that they actually hand over voluntarily and on time to the Internal Revenue Service.

Back in 2008 through 2010, the tax gap grew to around $458 billion a year. After IRS enforcement efforts and taxpayer late payments, the gap annual gap during that period shrank a bit to $406 billion per year.

New IRS data released today shows that for tax years 2011 through 2013, the average gross gap of missing tax money dropped slightly to $441 billion a year. Factor in late tax payments and enforcement efforts for 2011-13, and the IRS says the latest net tax gap is estimated at $381 billion.

Compliance rate also holding firm: While those raw tax gap dollars are close, the voluntary tax compliance rate of taxpayers is even closer.

The compliance rate is defined as tax paid voluntarily and timely divided by the total true tax and expressed as a percentage. And it's holding steady, based on the latest figures.

The new tax gap estimates translate to about 83.6 percent of taxes paid voluntarily and on time, says the IRS.

That payment rate, notes the IRS, essentially is unchanged from a revised tax year 2008-2010 estimate of 83.8 percent.

That compliance rate percentage also is line with the tax year 2001 and 2006 estimates of 83.7 percent an 82.3 percent, respectively.

"Voluntary compliance is the bedrock of our tax system, and it's important it is holding steady," said IRS Commissioner Chuck Rettig in announcing the latest tax gap numbers.

Tax gap components: The tax gap is created by three main components. They are taxpayers who don't file, don't report all their income and underpay what they owe.

Digging a bit deeper, the IRS says the non-filing tax gap is the tax not paid on time by those who do not file the required returns on time.

The underreporting tax gap is the net understatement of tax on timely filed returns.

And the underpayment tax gap is the amount of tax reported on timely filed returns that is not paid on time.

The tax gap is also categorized by five types of tax:

For the 2011 through 2013 tax years, IRS data shows that the biggest tax gap contributor was underreporting. That accounted for $352 billion.

And among that group, it's individual income taxpayers who are shorting the U.S. Treasury the most.

The folks shaving some of their taxable earnings off their 1040 forms accounted during those years for $245 billion of the tax gap.

Going after the gap: Tax gap studies through the years have consistently demonstrated that third-party reporting significantly raises voluntary compliance.

This is the statements we get, such as W-2 forms from employers or 1099 statements from folks who hire us as self-employed contract workers.

Compliance gets even better, notes the IRS, when income payments are also subject to withholding.

"Tax gap estimates help policy makers and the IRS in identifying where noncompliance is most prevalent," said Rettig. "The results also underscore that both solid taxpayer service and effective enforcement are needed for the best possible tax administration," added the commissioner."

The IRS noted its array of programs aimed at supporting accurate tax filing and helping address the tax gap. They range from working with businesses and partner groups to a variety of education and outreach efforts among all categories of taxpayers.