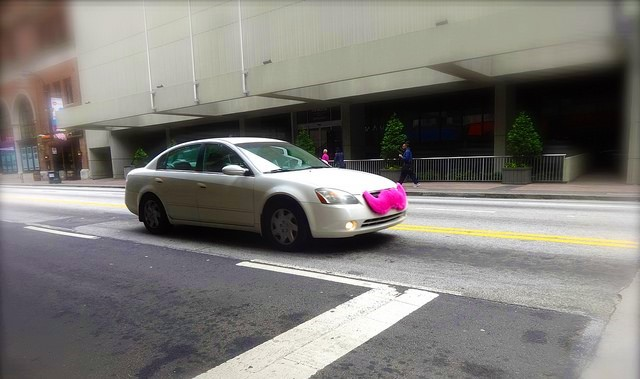 Lyft and Uber rides would face a new fee in Seattle to help pay for a public transportation option. (Photo by Daniel X. O'Neil via Flickr Creative Commons)

The hubby inherited some gas leases from a distant relative many years ago. It's not quite the same as Texas legend Eddie Chiles' famous urging that "if you don't have an oil well, get one," but the royalties have come in handy.

One of the first purchases we made using this money was to buy new bicycles. We got a kick out of fossil fuels paying for a more climate-friendly way to travel.

That same if you can't beat them, use them for something else approach is being suggested by a Pacific Northwest city leader.

Seattle Mayor Jenny Durkan wants to impose a 51-cent per ride tax on Uber and Lyft transports to help pay for a downtown streetcar.

Added to existing ride levy: The new tax would be in addition to the current 24-cent fee that Seattle already collects on ride-sharing trips, according to Heidi Groover of the Seattle Times.

The new 51-cent charge would help pay for the streetcar's $56 million budget shortfall, with any extra perhaps going toward Seattle's affordable housing initiatives.

The proposed new tax is projected to raise around $25 million a year over five years.

Driver wages, too: Durkan also plans to set a minimum pay rate for ride-share drivers, but any details on this proposal are pending a study.

The timing of the Lyft and Uber drivers' salary rates and per-ride taxes, however, are expected to be linked, at least as far as timing.

Groover reports that if both the tax and wage rules are passed by the city council, they would take effect in July 2020.

Groover notes that the combined 75-cent Seattle tax would be well below the $2.75 fee charged in New York and just a bit above the 72 cents that Chicago charges.

Lyft and Uber, not surprisingly, aren't fans of the proposal. The ride-share companies say it's a lose-lose for customers, who will pay more, and drivers, who will earn less.

Commuter tax comparison: Public reaction in Seattle has been mixed.

I suspect, though, that this might not engender the same amount of opposition that generally comes from similar commuter tax proposals.

In case you've never lived in a big city, calls for commuter taxes come up periodically, especially when cities are having a hard time making budget ends meet.

A commuter tax is a levy on persons who work, but do not live, in a particular jurisdiction. The argument for a commuter tax is that it pays for public services, such as police, fire and sanitation, received by and beneficial to people who work within the jurisdiction levying the commuter tax.

Here, a fee or tax is paid by users to enter a restricted area, typically a city center, as part a way to pay for or reduce traffic congestion within that area.

London enacted a congestion fee in February 2003. The United Kingdom metropolis remains one of the largest congestion charge zones in the world.

Commuter, congestion tax roadblocks: Arguments against such commuter management tools are that the taxes, either explicit or de facto, encourage businesses to relocate outside of the jurisdiction, along with their residents. That means a reduced permanent tax base.

There are also jurisdictional fights between not only cities and suburbs, but cities and the sometimes the state.

New York City had a commuter tax until 1999. There continues to be calls for its reinstatement, but that possibility is complicated by the fact that, as noted above, it would have to have support from the New York legislature.

Since many of the Empire State lawmakers who would have to agree represent people who do not live in New York City, the odds are not good for them to agree to give the Big Apple added transportation taxing power.

Plus, New York State already imposes an income tax on many commuters.

A commuter tax is assessed in Philadelphia. Since August 2013, the City of Brotherly Love has collected a 3.924 percent wage tax on residents and a 3.495 percent tax on non-residents for income earned within its borders.

A commuter tax also came up regularly during the almost two decades the hubby and I lived in suburban Maryland and commuted to jobs in the District of Columbia.

Since around 300,000 people come into Washington, D.C., proper to work every weekday from Maryland and Virginia, discussion of a transportation tax still simmers, despite the fact that Congress used the 1973 District of Columbia Home Rule Act to keep the city from enacting such a tax.

Do you live in a city? Would you support a tax that would reduce traffic or pay for the costs of added cars within your city's boundaries?