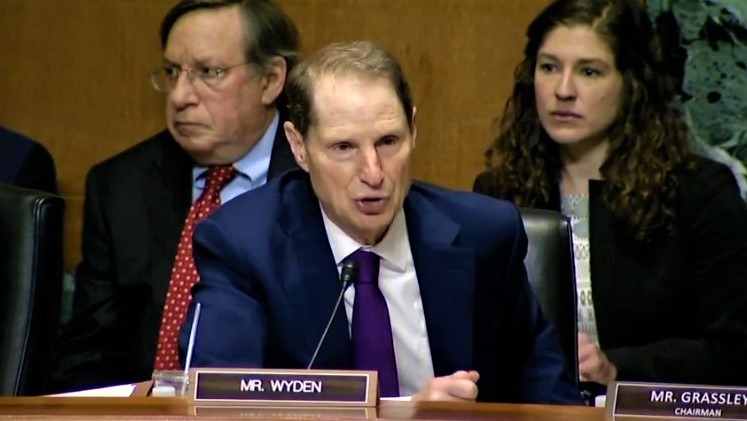 Most of the tax the rich action has been coming from Democrats who want to move into the White House in 2021.

Now a top Senate tax committee member has joined the call to collect more from wealthier Americans. And he has specific plans for the new revenue.

Currently, capital gains generally are taxed at lower rates, ranging from zero for some lower-income investors to 15 percent for most of stock market dabblers to 20 percent for the wealthiest portfolio owners.

Wyden, an Oregon Democrat who's the ranking minority member on the Senate Finance Committee, also would like to see tax collection on certain investment gains of the wealthiest people annually instead of when sold, as well as minimize the benefit of deferring tax on gains from the sale or transfer of non-tradable assets like real estate investments, aka like-kind exchanges.

The new money from these changes, says Wyden, could raise between $1.5 trillion and $2 trillion over 10 years.

"That is enough to shore up Social Security almost into the 22nd Century," according to the senator.

Without additional funding, Social Security is projected to pay just 80 percent of benefits after 2035.

Formal Congressional move on wealth taxation: Wyden's tying of new taxes on the rich to the popular government retirement benefits program is not new.

And many of the other Democrats seeking their party's nomination also have suggested ways to increase taxes on the wealthy to pay for their particular spending priorities.

But it is notable that the leading Democrat on the Senate tax-writing panel has identified one of his top wealth tax revenue targets.

If the Dems do take the White House and Senate in 2020 — still just speculation, but bear with me — Wyden likely would become Finance chairman and be a key player in crafting and moving such legislation through Congress.

Treat wealth like wages: "There are two tax codes in the United States: one for workers who pay taxes out of every paycheck and the other for high fliers who use games and tricks to avoid their taxes," said Wyden in a statement issued when he released his plan.

Even more infuriating, said Wyden, is that the wealthy have more control over when they finally do pay any taxes.

"Americans who work for a living pay taxes with every paycheck. Meanwhile, those whose income comes from wealth can defer their taxes, often for years. If they pay taxes at all after taking advantage of myriad loopholes, they can pay a lower rate than someone who earns a paycheck," according to "Treat Wealth Like Wages," the 33-page PDF document laying out his new tax proposals and the arguments for their enactment.

The current tax system, which some of Wyden's supports describe as "fundamentally broken" when it comes to taxing the wealthiest among, was, according to the senator's document, "designed for the fortunate few by professional tax dodgers."

"It's time we had a new system where everyone pays what they owe and the wealthiest Americans don't get away with paying lower average tax rates than their drivers, nannies, and household workers," argued Wyden in the document.

Exempted upper income: Wyden says his plan's rules would apply to only a fraction of the richest 1 percent of Americans.

But what happens if you're definitely middle class, but see an unexpected bump in your income or worth because of a windfall or a very good investment year?

Wyden says his bill takes care of these eventualities.

His new taxes would apply only when a taxpayer has $1 million in earned income or holds $10 million in eligible assets for three consecutive years.

If a person misses both of these thresholds for three straight years, the rules will no longer apply.

The first $5 million in value of family farms and $2 million of primary and secondary residences would not count toward the $10 million asset threshold.

As for retirement savings, which is where most middle-income folks put the bulk of their investments, the Oregon Democrat says the first $3 million would be exempted from the threshold and none of the gains in those accounts would be subject to the annual tax requirement.