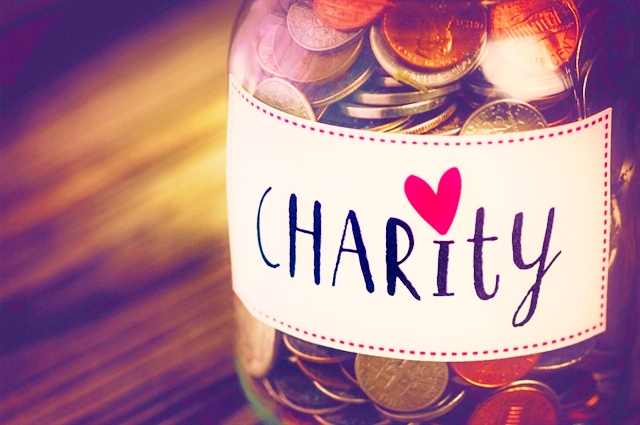 Nonprofits are a bigger part of our lives than we tend to realize.

The hospital your or your children were born in likely was a nonprofit. That museum you visited on your last vacation opens its doors as a nonprofit entity. And, of course, the house of worship you attend each week is one, too.

In addition, millions annually give time and money to nonprofit groups.

In most instances, cash donations to charities are not driven by tax breaks. Folks simply give to a favorite charitable organization because they support its goals.

Still, says a new report from the National Council on Nonprofits, policy changes at federal and state levels can pose significant problems for nonprofits.

Fewer donations follow federal tax changes: Such observations and concerns are not new. But they have gained some urgency since the Tax Cuts and Jobs Act went into effect in December 2017.

Congress itself, in creating the TCJA's itemized deduction limits and increased standard amounts, anticipated that 28.5 million fewer people will file using a Schedule A, which is the only place you can claim charitable donations.

That projection prompted many lawmakers (mostly Democrats) and nonprofits to predict that the most sweeping tax reform measure in more than 30 years could suppress charitable giving by $13-to-$21 billion annually.

Reports since the Republican tax reform has been in place seem to bear out those worries.

True, correlation does not imply causation.

But it's not a stretch to see how the overall limits on itemized deductions, along with the corresponding dramatic increase in the standard deduction that likely prompted many to forgo prior year tax-related moves like giving to nonprofits, could adversely impact charitable donations.

Federal tax impact on donations: The problem, says the National Council on Nonprofits, is that 501(c)(3) organizations — that's the Internal Revenue Service nonprofit status of public charities, which are the ones that can accept tax deductible donations — "need a reliable, steady, and supportive public policy environment in which to pursue their missions."

Image of source of nonprofit funding with this header: Revenue Sources for Charitable Nonprofits and credit cutline:

"Yet those missions are vulnerable to actions by policymakers who, whether intentionally or inadvertently, can take away needed resources, impose unnecessary burdens, interfere with decision-making, erect harmful barriers, and otherwise change laws in ways that disrupt the work of charitable, religious, and philanthropic organizations," according to the 44-page report from the Washington, D.C.-based nonprofit advocacy coalition.

And the potentially disruptive policy changes, tax and otherwise, are much greater at the state than the federal level.

State policy problematic, too: But it's not just federal tax policy changes that pose problems for organizations.

A change in law at the federal level certainly can have nationwide ramifications, but changes in a state's laws can be just as consequential for the charitable nonprofits, says the National Council on Nonprofits' report.

The Council cites February 2019 data from Quorum Analytics that 743 show policy changes enacted by Congress between 2015 and 2018. State legislatures during that same period put 60,641 new statutes into effect nationwide. 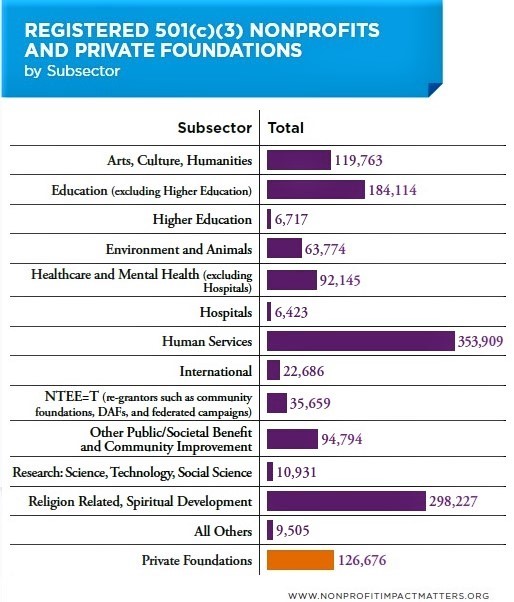 The National Taxonomy of Exempt Entities system identifies hundreds of ways that nonprofits can accomplish their primary purpose, applying Internal Revenue Service Activity Codes to every entity granted tax-exempt status. In this chart, the National Council on Nonprofits compresses those classifications into 13 broad categories of nonprofit subsectors, including an "Other" category. Note that while the chart shows 298,227 organizations in the Religion Related, Spiritual Development subsector, houses of worship are not required to register with the IRS, so the actual number of those organizations is larger than reported here.

These policy changes, says the report, "whether intentionally or inadvertently, can take away needed resources, impose unnecessary burdens, interfere with decision-making, erect harmful barriers, and otherwise change laws in ways that disrupt the work of charitable, religious and philanthropic organizations."

"Some state governments have undermined nonprofit sustainability by capping or eliminating charitable giving incentives," continued the National Council on Nonprofits' report. "Nonprofits in one state saw a drop of more than $60 million in donations to support their work in a single year."

Federal charitable tax break proposals: These dire warnings are one reason why, at the federal level, several bipartisan bills have been introduced in both Congressional chambers to make tax changes that would bolster donations.

The CHARITY Act, say the duo, would encourage charitable giving and make it easier for foundations and other tax-exempt organizations to conduct their charitable mission. Specifically, it would:

Some House Ways and Means Committee members from both sides of the political aisle also are looking at ways to enhance IRA charitable rollovers.

The measures would treat donations that retirees make to gift annuity programs as pretax income.

Realistically, it's too late in the legislative year for these bills to make it into law. But keep an eye on them as we continue to deal with the TCJA charitable limits through at least 2025. These, and more, proposals to aid nonprofits likely will be back.

Do you give to a favorite charity (or two or more) on a regular basis? Have the TCJA changes affected how or how much you donate?